The Sri Lankan Prime Minister has resigned from his position.

The Guardian reports as follows:

[The resignation is the latest concession made by the Rajapaksas in the face of protracted anger and protests. The president recently agreed to repeal an amendment to the constitution which had concentrated power in his hands and hand power back to the parliament. Other members of the Rajapaksa family who had previously held seats in the cabinet have also stepped down, with the president the only remaining member of the political family still in power.]

The previous resignation was on 15 December 2018 through Due Processes by the Opposition. Not so this time. The Guardian report gives us an indicator:

[The US ambassador to Sri Lanka condemned “the violence against peaceful protesters today, and [called] on the government to conduct a full investigation, including the arrest and prosecution of anyone who incited violence”.]

Mr Mahinda Rajapaksa is protective of his family. Members of his family are strongly conscious of the influence of the American government at global level. The current President also would not want to jeopardise the status of family members who are already American citizens and or would be in future.

An American of  Sri Lankan origin shared the following this morning:

[Americans are notoriously ignorant historically and geographically, most quite content to live in their own little self-satisfied bubble, unconcerned about the larger world or even the paradox of celebrating their "freedom" in a land stolen from its indigenous inhabitants and developed through the enslavement of Africans. Politically the future is not promising, with the distinct possibility of a return to office of Trump in 2024, along with Republican control of both houses of Congress as well as conservative dominance of the Supreme Court, a pretty scary scenario. If I'm not around to see this, I won't regret it but feel sorry for my grandchildren.]

Such a mind would not conclude that this resignation is final. It is most likely to be interlocutory.

Below is a conversation with another Australian of Sri Lankan origin in this regard:

Fellow Australian of SL Origin: Is it a ploy to enforce Martial Law like in Burma only time will tell  ?

Gaja : NO! The President has shown indicators that he would shed the powers of Executive Presidency. Those who doubt this are yet to invest at that level.

Fellow Australian of SL Origin: They say one thing and do the opposite; purity in Thought, Word & Deed is lacking very much in the world today

Gaja : It is NOT the words of the person saying it that counts but  the ‘intent’. When a self-governing listener /reader takes it at the root level that goes directly to Oppose any negative intent or support any positive intent of that listener/reader. That is how Democracy works.

The above conversation began with the following posting by Dr S.B.Asoka Dissanayake at parafox: Violence in Ceylon (parafox-asoka.blogspot.com):

This from verses 137 to 140 of Dhammapada.
This is in response to Rajapaksa Mob Violence.
One who uses violence against those who are unarmed and offends those who are inoffensive will soon come upon one of the ten states.

Unfortunately these are happening right now in Ceylon.]

[Very true Askoa. But this holds true only so long as the victim does not retaliate. When the victim retaliates their common law goes down to that level]

The above was preceded by the following with another medical professional in the same group, who according to my reception was ‘telling me’ how I ought to receive the accolades to Mr Roy Ratnavel – author of the book ‘Prisoner #1056 on the basis of the promotion at Prisoner #1056 | Roy Ratnavel | ‘The Rise’ Keynote Address | London - YouTube 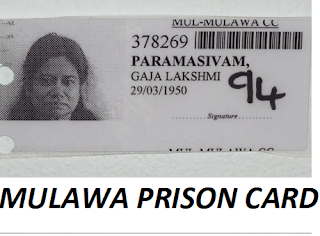 I was prisoner 378269 in NSW Australia. My book was published by Lakehouse, Sri Lanka. Canada is a money-rich country and Roy Ratnavel became a rich man. Sri Lanka is money-poor but relatively speaking People-rich. Rich get richer and the poor get poorer – in money or  People

Tamil Medical Professional (TMP): Come on Gaja, this is about a Tamil man's great success story that brings great honor to not only  Tamils but to Sri Lanka too.

Sri Lanka????? Listen carefully to him reading the passage from his book at around 11:29. He mentions the mines laid by LTTE to protect the ‘town’. How can anyone ‘protect’ by laying mines? They were to kill Sri Lankan soldiers in combat. How can you legitimately claim that he is a great honour to Sri Lanka? You are certainly not Sri Lankan. Roy states also that he is ‘An accidental Sri Lankan by birth’  . By endorsing him, you classify yourself also as an ‘accidental Sri Lankan.’  In my case I believe that I was meant to be born in Sri Lanka. In terms of Tamil – that also was ‘accidental’ to Roy. If he were born in Canada – of which he is ‘proud’ – he would have been born in an ‘indigenous’ community.  Then he would have spoken against the invading White Settlers to whom Canada is now a ‘home’. Ownership is absolute and not relative.

TMP :As expected and not surprisingly you ruined this joyous moment by uttering things leading to gloom and frustration by poking your name into this grand event.

Gaja: If indeed your joy was curtailed by me, that is because (i) you accept my experience as true and (ii) as an Australian you feel uncomfortable because you cannot claim to be a ‘proud Australian’ along the lines of Roy calling himself ‘proud Canadian by choice.’

TMP : Your prisoner number is to remind your misdemeanour. Had you lived in SL there too you would have earned a number.

Gaja: Had I lived in Sri Lanka that would have continued to be in Colombo and I would have taken action in a court of law where my status would have been higher than the status allocated to me in Australia.  I was meant to go through this experience and write about it. The Police charged me unlawfully through Section 4(1)(a) of the Inclosed Lands Protection Act 1901 which is like KKK using Purananuru – as if he were expert.  According to my interpretation, if I were guilty of entering without permission – then you also cannot enter any NSW University without permission. You speak of ‘ reminder of my misdemeanour’.  Because my family wanted me out – I signed bail conditions that I would not enter the UNSW where many members of my family had their University education. Since undertaking my bail conditions I have NOT stepped into that University nor any other in NSW. That will be the status I would carry with me until I die.

TMP :  I dont think this event is to talk about your achievements but to talk about this self made great man. Dragging your name into this by none other than yourself is a criminal act, a crime against humanity and thus he becomes a  survivor from your onslaught as well. You can’t become a senior by your own imagination. As I have already said that promotion must come from worthy men. You have further demoted yourself and now have become an intern.

Gaja, learn to admire people who have achieved in life and instead don’t ever try to promote you. Leave that to others. This man is trying to uplift the Tamils whereas you are trying to dig their graves. You are just an armchair critique and not an achiever. I hope and pray better wisdom prevails on you and hope all our gods and godmen help you in this direction. You don’t need to do any thing good but at least don’t do any bad things.

Gaja: There you go again ‘telling me’ as if I am your ‘junior’. My experiences are my lessons and Gurus. The other day when watching BBC production ‘Criminal Justice’ – in which a young guy wrongly charged with murder goes through prison experience, I kept recalling my own and kept sharing again with Param. That prison was also where my word was ‘taken’ without question. Each time I recall and experience the pain – someone else is protected by Natural Justice and someone in position ‘loses’ status. That is the way Sovereign ownership works. Roy’s book does not have that power because he has not only taken compensation in Canada but is also ‘profiting’ from writing a book that would not be read by Tamils at grassroots level. As for Academics – a successful businessman cannot be a true academic at the same time

I believe that we Sri Lankans would make a positive difference by sharing our current experiences of Sri Lanka and what is presently happening there now – received on the basis of our own truth from our past experiences in Sri Lanka of Sri Lanka. That is the philosophy of rebirth and karma. That to me is true and natural Democracy desperately needed by our heirs living in Sri Lanka and not in Australia or Canada.