HAS CONVERTED TO BUDDHISM?

Experience goes straight to ‘wisdom’. Without experience any law becomes the workshop of the idle mind. Take for example the following report by Economy Next:

[Sri Lanka opposition leader Sajith Premadasa on Wednesday (04) blamed Finance Minister Ali Sabry for his role as then Justice Minister in passing the 20th amendment in 2020 which controversially restored a number of executive powers of the president, which Premadasa claimed contributed to the economic and political crises Sri Lanka is now facing.]

In Democracy, it is the Parliament that passes a law and not the Justice Minister. It is the duty of the Justice Minister to ensure that there is logic in the law. It is also the duty of the Shadow Ministry to Oppose logically – including by highlighting an imbalance in the proposed law. The picture ‘shown’ by the Opposition becomes the law of minorities or v.v. Otherwise the People who have the adverse experience become the Opposition – as has happened in Sri Lanka. Likewise People who had positive experience through the law become the government in their home area.

Yesterday, I received such an endorsement to my work:

[I have lots of appreciation for your credibility in journalism and creative writing. They are valuable and should not go astray. I want to suggest to you that you should document all your writing with chapters on politics, philosophy, psychology etc. by publishing a book. This is only a request from a friend. You can donate a couple of copies to the Jaffna Public Library.

After all, I come from Araly North, which is only a couple of km from your Thunaivi if I am correct.

I was pleasantly surprised by this response that connected me to my temple heritage from my paternal grandmother of Araly North in Northern Sri Lanka. That gentleman did not know this but by becoming the medium he confirmed common ownership.

If Mr Premadasa had likewise felt connected to his electorate of Colombo at the time of 20th Amendment, he would have connected to the intellectuals who are protesting in Colombo now.

The 20th Amendment on the other hand hit the hip-pocket nerve of the civilian due to lack of Opposition to it within the Parliament. The best example is the ban of farmers’ fertilizer subsidy influenced by the power of the 20th Amendment.  A military leader would lack the belief to connect to the basic needs of the farmer. Even in the case of foreign governments – their attraction to Sri Lanka is its armed power –including the power exercised  by armed rebels in all major ethnic groups. They cannot be regulated by law. They could be managed by belief. The poem in the appendix, in response to my article on karma, highlights the essence of the economic balance and how the balance is carried forward.

My response to an American professional who recommended pursuit of class legal action against Aspen Medical went as follows:

‘As you would appreciate, there is an Equal & Opposite force /entry manifested for every entry / action. The higher the level at which we make the first entry – the closer the other side would be to exponential power which navigates itself.  My article has been forwarded to Australian government also. I took action against the then PM (John Howard) when he was head of state. Beyond that I do not have position support or group support. But in its place I have the ‘intuitive intelligence’ to have the higher level experience through others’ work. In this instance the ‘other’ is ABC and now it is you also. From Sri Lankan angle below is the poem by Dr Saliya .’

Finally, Mr Premadasa who is a Buddhist has failed to correct the imbalance in Article 9 of the Constitution which renders Buddhism Executive Presidential status. Every non-Buddhist Sri Lankan who feels the pain of discrimination but continues to believe s/he is Sri Lankan, would effectively ‘curse’ Buddhists who benefit due to this article. At constitutional level blessings and curses spread exponentially.

If Mr Sabry gets paid for his work as Justice Minister, and yet has failed to correct this imbalance, then he has effectively converted to Buddhism. On that basis he is not likely to legitimately balance the Finances of Sri Lanka. If the cause is in favour of one side, the effects also would be. Then the cumulative karma of the government takes control through powers of Natural Sri Lankans who balance the books in their own areas of control. They are the true governors of Sri Lanka and they do not need any Executive power – through Buddhism or Secular law. The governments since 1972 have recorded single entry through Article 9 of the Constitution . 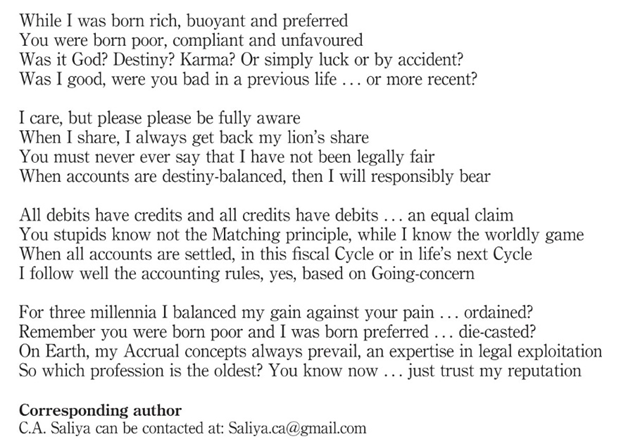