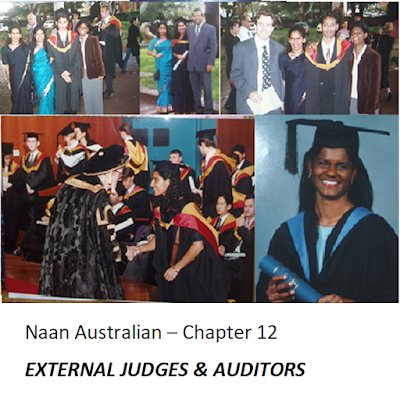 The Sri Lankan situation is being blamed by most as government’s failure. But a deeper reader would recognise that the protestors were effectively ousting the Opposition to take its place through Direct  Democracy.

How does one recognize Equal Opposition? Cause and Effect are the best examples of Government & Opposition in any group. The direct way is to become the effect of the policies caused by the government. When I was classified by Australian Police officers as Sri Lankan – I became the ‘effect’ of their policy at that level.  As per my work I ought to have been heard by seniors – as Equal Opposition, since I disagreed with senior management. But I was treated as ‘junior’ and hence the description – that I was Sri Lankan. By taking that place – after opposing it – I effectively renounced the ‘gap’ between the entitlement of an Australian by belief and a Sri Lankan as per the apparent. This eventually resulted in massive cost to the Senior Management of the University of NSW who called the Police to deal with the ‘junior’. A young lady police officer said, after reading my statement given at the police station – ‘your English is better than mine!’ Effectively – that officer was Opposing the University authorities. Prior to arriving at the Police Station, when I was arrested at the University premises and was asked to remove the anklets  I was wearing. I did as ordered. Then I was asked to remove the pin that held the saree fall to my blouse. I continued to obey. Then I was asked whether there were more pins on me? I said words to the effect ‘yes – the one holding my underskirt. Since there is the risk of me standing naked here if I removed that – I leave it to you to do so’. So saying I lifted both hands to shoulder level. The officer said ‘get into the vehicle’. All this happened in front of the Chancellery building almost where I stood as the mother of graduates of the University.

In questioning the Vice Chancellor as per my true discovery, I effectively renounced all of the above credits.

Later, when writing my book, I realised that by not acting to prevent the arrest at the level of the Police, I opposed them without taking revenge or other benefits. In other words, I became the ‘effect’ of their policy – for all to ‘see’. I felt also that Gandhi, of whom I was strongly conscious – during this experience, also knew this and hence his pathway of ‘Non Violent Non Cooperation.’

Today, a lady professional wrote as follows in response to my article ‘Sri Lankan Karma’:

"We need to be patient and believe that our country will come through all this. The people must learn to love their country.”

In the ensuing discussion, Mr Wigneswaran responded as follows:

‘Kala kala dey pala pala dey!  You reap what you sow. This applies to all. Iswaran’

To this another wrote in that ‘free environment’:

[As you know, Rajapaksas allocate almost one-third of every budget for defence. Besides, they spent over two hundred thousand crore rupees to bring the war to an end and still pay interest on it. I am going with Iswaran annan says, "Kala kala dey pala pala dey!" ]

The use of the above Sinhala version of ‘what goes around comes around’ is my parallel of using good English here in Australia. Mr Wigneswaran used it in his article headed ‘On Silva’s US Entry Bar: The Tamil People’s Time For Justice Has Come!’:

[Given the intransigence of three successive Sri Lankan administrations over more than ten years, the rule of law must now prevail. The Tamil People’s time for justice has come! “Kala Kala dey pala pala whey” is a Sinhala proverb. It means you reap what you sow.]

As a member of the Judiciary – Mr Wigneswaran has the ethical responsibility to use that same yardstick on the LTTE . As per Wikipedia report on LTTE, USA has proscribed LTTE as follows:

[Proscription as a terrorist group
United States (designated as Foreign Terrorist Organizations by the Department of State since 8 October 1997. Named as a Specially Designated Global Terrorist (SDGT) since 2 November 2001)]

Accordingly, one is entitled to conclude that to the USA the LTTE is senior to the Sri Lankan Army in terms of war crimes. So the pain of war related hardship that Tamils continue to experience is also due to their own Karma once they declared Separate State.

The law/ measure  has to be One and hence one becomes Opposition – the other side of the coin.

If Mr Wigneswaran had begged  for his food as Saint Pattinathaar did – he would have burnt down the house of his relatives who poisoned law abiding Tamils. I did just that in terms of workplace credits here in Australia and leant that the system of Truth took-over the responsibility to maintain the karmic balance i.e. the completion  of circle -  "Kala kala dey pala pala dey!"