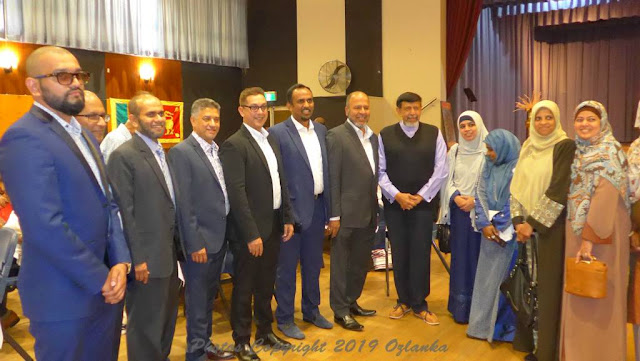 High Commissioner has no Burqa Fear???


http://www.ozlanka.com/2019-albums/apr2019-pics/skanda/index.html#expanded
At the Farewell about which I had no knowledge until today – 29-04-2019 – Breakdown in intelligence network?

It will soon be voting time in Sri Lanka and the Easter Sunday bombings have to underpin our votes.
When something goes wrong we look for reasons ‘why’ at various levels. The three common levels at which I group are (1) At the seen and the heard level (2) At the level of intellectual discrimination using principles and laws (3) Belief level. Our votes carry the-self governance value as per the respective levels. The most powerful one is category (3).

These apply not only to electing government but everyday issues in which we attend and/or participate. Right now the strongest for me is the Sri Lankan bombing issue in which I vote as category (2) and  underpinned by category (3) power.

To be valid, category (1) voter / citizen / employee needs to merely report and not conclude. At seen and heard level – we confirm only what happened. We may use that information at our private level for the self only but not at common level. To the extent we derive benefits for our vote – we have only reporting authority. The vote of one who derives more benefits than her/his contribution, is of negative governance value. The net value of all votes confirm the outer picture and hence majority rule. Category (1) voter who concludes and advocates, pollutes the value of her/his own vote which dilutes the total value of Category (1) voters.

The voter who uses intellectual discrimination using particular principle / law – adds deeper value to her/his vote and invokes the power of other intellectuals who used and/or are using that principle /law. It is like an express agreement between parties. This strengthens administration in the home area of the voter.

The deepest voter is one who votes through belief. This does not require an express vote and is exponential in value. Such a voter/participant/employee  has the experience of governance with or without any official position. That was Gandhi’s power. Category (1) voter who is loyal to category (3) member – would enjoy the protection of self-governance.

The Head of Siva Senai in Sri Lanka directed us to http://www.virakesari.lk/article/54888 - in which Mr Mohamed Muzamil states that the Burqa is not part of Muslim culture. The following discussion ensued.

Gaja: What authority do you have as a Hindu man to ‘tell’ a Muslim woman what to do? If it is about security what did you do when Tamils were threatened by militants? Follow the path of Dharma and not your desire to show power.
Mr Siva Sena: I know arguing with you will not take the issue anywhere.
All Sri Lanka Ulama Council initiated.
I was inundated with calls from a large populace of Hindus from Hatton, Kalmuania, Mannar, Vavuniya, Mullaitivu and Jaffna asking me to second the proposal.
Every peace loving citizen including Muslims of Sri Lanka wants the burqa banned.
I am not alone. We Hindus are demanding.
It is not about gender. It is about the lives of Hindus in this beleaguered  island.

I like to read your mails. They are full of thought provoking contents.
Regards

To my mind, Hindus talking about Burqa at a time when Christians  and Muslims are hurting, confirmed selfish ‘me too’ attitude. Given that majority Sri Lankan Hindus are Tamils, and the Tamil community produced suicide bombers one of whom killed India’s former Prime Minister Rajiv Gandhi also a Hindu, taken as a whole we do not have the moral authority to recommend such changes to law applicable to Muslim women.  Even if Muslims did it – that would be  highly reactive and make the Muslim woman feel that she was being blamed for the bombings. The timing needs to be independent of emotion provoking tragedies. At this time, the side that we speak through needs to be one who respects the law. The letter was addressed to the President who seriously violated the law and therefore lost the common communication with the law enforcement officers.

Talking about Rajiv Gandhi – the mighty Indian intelligent system that claims credit for intelligence sharing re the Easter Sunday failed to protect their own Rajiv Gandhi. The power to carry out the act could have been based on the deep pain of the individual  or the excitement of  combat.  The following report confirms that it was the latter:

[She holds the unhappy distinction of being the first-ever human bomb in the country's history. In LTTE circles, Dhanu, 24, whose real name was Kalaivathi, is held in some awe.
So much so that at a public function held in Jaffna last year, Pirabhakaran honoured her father posthumously with a 'gold medal' for her role in the assassination of Rajiv Gandhi.
Dhanu, who studied till middle school in Batticaloa, was inspired by the Tamil liberation movement at a very young age. In fact, her father, A. Rajaratnam, who is described as Pirabhakaran's mentor, played a crucial role in moulding the LTTE chiefs thinking during the movement's formative years between 1972 and 1975.] – India today article ‘Rajiv Gandhi assassination: Dhanu, the first-ever human bomb in Sri Lanka's history’
Dhanu did not wear a burqa nor was the Churitha dress that she wore banned in India. As shown in the picture above – the Sri Lankan High Commissioner to Australia shows no fear of Muslim clothing.

More important is our belief which will surface in the appropriate form as the time and place of need. In my article ‘Paying Respects to Suicide Bombers’ at  https://www.blogger.com/blogger.g?blogID=6863031047273509081#allposts/postNum=7 , I highlighted as follows:

[We are currently in political mode and hence the use of belief based pathway needs to be divided. The President disconnected from the UNP intelligence and intellectual governance in October which as per my belief was due to the temptations of going back to the past where he was dependent on Mr Rajapaksa who was showing Mr Sirisena the big picture. That big picture has a big piece of hearsay value through China’s money brought in through Mr Rajapaksa who seriously lacked investment in global governance but was indebted to the global community whose name and facilities were used to defeat the Tamil Tigers. The owner of Shangri La hotels – Mr Robert Kuok – a Chinese-Malaysian, failed to show respect for Tamil pain when the Shangri la  Luxury hotel was built in Hambantota and later another  in Colombo near the area where the Defence Headquarters were attacked by suicide bombers. To the extent the suicide bombers were genuine and sacrificed their lives – their ghosts would be invoked by those who lack belief in that land. That land was Defence land for a long time and had the power to protect Defence personnel who believed in that land and their work.
Relatively speaking, the Northern part of Sri Lanka – where due respect has been paid to such suicide bombers and other combatants has confirmed that it was cured itself of frivolous use of power. The pain that the folks have been enduring – without taking revenge – has developed as a protective structure. In Batticaloa – this does not happen largely due to Karuna abandoning those whom he led in combat ]

Yesterday I learnt through our news that the site of Bali Bombing is to be cleansed through Hindu rituals before becoming operational.

I felt that my message in relation to Sri Lanka has invoked value in Bali after 17 years. This is because I felt / feel the pain of both and pray at the Bali memorial in Coogee. Belief does not recognize place and time borders. It takes our Energy to the needy who are ready to receive and share. That is how I am sharing with Muslims who are now going through what we Tamils went through during the ethnic war. Such sharing cures the problem at National level.