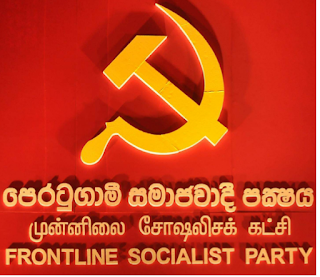 Today is the birth anniversary of my cousin Krishna who was murdered by those who took the law into their hands – and called it ‘Freedom Fighting’. This article is in honour of Krishna’s branch of our family, to whom I am connected at root level.

The Australian medium ABC calls those who invaded  homes of leaders ‘protestors’. As a law-abiding Sri Lankan, I am ashamed of their show of ‘looting’ habit – under the guise of ‘protests’. If this behaviour is rewarded, Sri Lanka would suffer from permanent war.

As if to confirm this an LTTE admirer wrote to me as follows, in response to my article ‘LTTE KARMA INHERITED BY SINHALESE’:

I don't believe in karma. LTTE had to alienate or kill traitors within. For any construction, there has to have some destruction. To make an omelette you need to break a few eggs. Prabakaran was offered the position of Chief Minister of North but declined to say Eelam constitute North and East. He was never after any pathavi as such in fact he always maintained that when the war is over he would fade away. How did the current younger generation of Sinhalese are wanting a leader such as Prabakaran to lead their country?

I acknowledge that you do not believe in karma. But Karma keeps writing itself.

You say [Prabakaran was offered the position of Chief Minister of North but declined to say Eelam constitute North and East.]

Who offered it to him? NOT the People and VP (Prabhakaran) knew this. Was it CBK ? If yes LTTE would have bombed a mosque. That is the power of Buddhism foremost article.

You say [He was never after any pathavi as such in fact he always maintained that when the war is over he would fade away.]

You are ignorant . VP needed the Executive Power to kill his Opposition. Without that he would not have been able to command his cadre -most of whom were ignorant of democracy.

If that were true he would not have been killed in 2009. Are you saying ‘he faded away – ready to return after GR left? That makes him a coward!

As per my intuition, I have repeatedly published the JVP influence in this ‘protests’. It may not have been planned. The most recent one was on 07 July under the title ‘COMMUNIST TAKEOVER’. The full text of the ‘intelligence report’ mentioned in the article, is in the Appendix. The communication began with ‘JVP is planning to overthrow Gota and the SLPP Government in one clean blow by the end of this week with the help of FSP’.

Saturday, 09 July,  was the end of the week. That was when hooliganism was let loose by those who took over ‘protests’. Here in Sydney, I had had direct experience of the FSP leader Premakumar Gunaratnam at Sri Lanka Reconciliation Forum Sydney. On the basis of   my direct experience by living with the LTTE without any position,  I connected the LTTE insurrection to caste. Then one-time attorney general of Sri Lanka Mr Sunil de Silva PC, said that the JVP insurrection was also based on caste. Then Mr Premakumar Gunaratnam who was a visitor – out-ruled the former Attorney General and stated that it was due to ‘unemployment’ and not caste. In truth they were the same. In facts – they took different forms. Both are sacred and sovereign. But Mr Premakumar Gunaratnam overruled the official in law and thus lost the support of Sovereignty. Suppression of an Equal leads to loss of Sovereign power – in the same way denial of junior’s earned status does. Equal Opportunity laws are based on this sense of independence. Here in Australia and Mr Premakumar Gunaratnam acted in breach of Australian law. As per Wikipedia, this karma was taken to Sri Lanka from Australia:

The Ministry of External Affairs said that Gunaratnam was in violation of immigration laws and for that he was deported. ….

Gunaratnam was arrested in November 2015 for violating Immigration and Emigration Laws after arriving in the country on a tourist visa. He was released on 2 December 2016 after serving his prison term. He received Sri Lankan citizenship in February 2017 and was directed to remove his Australian citizenship.]

That placed him in the same cultural group of President Gotabaya Rajapaksa – but as his opposition. The beauty of Opposition is that when it is true to itself, it knows its Equal Opposition. If minorities were true to themselves – they would identify with their Equal half in majority group. But this natural power is lost when they take a relative position as senior or junior to that ‘other person’.

Now if JVP-FSP coalition takeover power – they would irreparably damage the value of Peaceful Protests in Sri Lanka.

Now if JVP-FSP coalition takeover power – they would irreparably damage the value of Peaceful Protests in Sri Lanka. The conduct of the ‘crowd’ was unregulated and became hooliganism. That is the way of those who self-isolated on caste basis became leaders due to armed force – i.e. Tamil LTTE & Sinhalese JVP in Sri Lanka.

JVP is planning to overthrow Gota and the SLPP Government in one clean blow by the end of this week with the help of FSP. Then the JVP leader Comrade Anura will assume Executive Presidency and form a JVP-FSP Government making Comrade Kumar the Prime Minister. Comrade Anura will call a state of emergency and take charge of the triforces and the police. They have an impressive plan to radically transform Sri Lanka. Following is the 6 months plan which Comrade Anura was alluding to just yesterday. First thing they will do is immediately nationalize large private properties such as tea and rubber estates across the country owned by local and foreign nationals. They will also nationalize top export businesses including MAS and Brandix. The JVP-FSP government is planning to nationalize private banks such as Commercial and Sampath as well. The idea is to secure the foreign reserves held by the private sector. This will allow them to repatriate all export revenue to the country within a short period. It is justified because there is no other way to raise the funds needed to import fuel, fertilizer and other essential items quickly. This will be welcomed by the majority of poor people in Sri Lanka and the plan is to announce that all revenue will be distributed among the poorest segments. The JVP-FSP Government will freeze all personal and corporate bank accounts exceeding Rs. 2.5 million and charge one time progressive tax called the Social Tax reaching upto 50% on savings exceeding 20 million. This is to quickly raise the Rupees needed for the fiscal deficit. This is a brilliant plan to tax the richest people all the while getting the support of the majority poor segments of the society. NPP experts have already made the calculations to the last digit for this purpose. With these two immediate moves they will have enough funds for two years to run the government without any issues. They have another ingenious plan to nationalize all luxury vehicles including SUVs. They already have the database of all the government officials who had sold their vehicle permits. Their intelligence service is absolutely impressive. The plan is to sell all luxury vehicles to Africa as spare parts. This will not only massively reduce vehicles on the roads but also cut the demand for fuel in half. Another brilliant move. They have already planned to import 5,000 new buses and a number of new train compartments using this money. All private sector buses will be nationalized as well. This will equalize the society and allow all citizens to travel on public transport easily. Simultaneously the JVP-FSP Government will nationalize all telecommunications companies such as Dialog, Mobitel, Hutch and mass media companies such as Derana, Hiru, Swarnavahini, Siyatha as they all use public bandwidth. In Fact they are planning to consolidate the telcos and form one state operator. Good news is that they want to give free data to all of us at all times. This will be liked especially by the youth who are struggling these days with connectivity. Freelancers will be happy and it will lead to more USD income. They will also consolidate the mass media companies by incorporating them into Rupavahini and ITN. This way they get complete control of the mass media. An essential tactic to maintain control. And through one telco, they can monitor any political conspiracy or uprising. They have very carefully thought about everything. The JVP-FSP Gov will launch a state sector crackdown on corruption starting from the Customs. They are planning to simply replace all customs officers with FSP members who are all graduates and are loyalists to the cause. This will put an immediate end to all the bribing and corruption taking place at the customs. Imagine the money that will be saved and the taxes that can be raised! Finally, we can get rid of the corrupt muslim merchents and their monopoly. The same technique will be used to clean up the entire public sector by replacing the politically appointed henchmen with fresh local university graduates only. Comrade Anura wants a young public service. So There will be a mandatory early retirement for all bureaucrats aged 50. This is a great way to employ the disgruntled youth. NPP experts will be appointed to lead the state enterprises. They are the most qualified to do the job. There is also a plan to nationalize the supermarket chains such as Arpico, Keells and Cargils and incorporate the entire supply chain to Sathosa. The JVP-FSP Gov wants to curb the imported foods while distributing local produce to all citizens at an affordable and standard price. And they will also nationalize the large private rice mills such as Araliya, Rathna and Nipuna. This will end the age old rice mafia for good. Yet another brilliant move. These can only be done by somebody strong, experienced and patriotic like Comrade Anura. Their research shows that the vast majority of people will welcome these radical changes-for-good