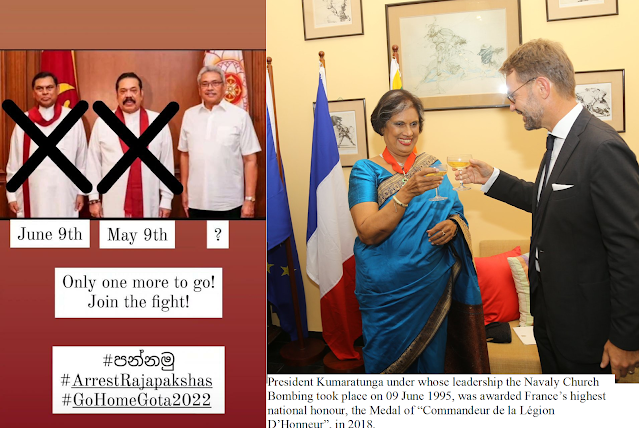 A true senior has insight into the mind of Junior. Such a senior becomes True Equal Opposition which knows its other side as it knows itself. Hence the Equal position to the government by majority. That government, if truly senior, would read the Opposition before the Opposition can read itself. That is the way of Truth. Earlier today, I wrote about the way to identify with karmic connections – including in relation to LTTE. After that exercise I read the email from an LTTE heir who sent two clips – named then and now respectively. The first one was a speech by the then President Mahinda Rajapaksa speaking in Tamil – that Tamils could now be ‘free’ of fear. Back then, Professor Sathananthan and I shared our appreciation of the effort by the President to speak in Tamil, with our common home group in which Journalist Ms Shenali Waduge and I were the only females. Today that recognition of the opposition empowered me to make further connection that the leading heir of LTTE failed to identify with. This confirms that I am his senior in this issue.

On 10  June 2022, I received the message/picture in the left  from that LTTE heir of the LTTE. This had the question mark on July 9th. Yes the third brother – the President did resign. But the deeper message was in the ‘Now’ message in the ‘Then and now’ clips. That was about the 09 June 1995 bombing being attributed to President Rajapaksa by an Indian Reporter. The then President was Madam Kumaratunga whose father began developing the Separation karma– through  ‘Sinhala Only’ policy and whose mother brought in the Buddhism Foremost article in the Constitution.

The day after that bombing – which was North’s parallel of Easter Bombing – the Bishop of Jaffna wrote to the then President as follows:

[I very much regret to report to you the tragic killings of innocent civilian refugees who had gathered at the above Church on the instruction of your Defence Ministry.

A 'Pukkara' Air Craft had dropped a cluster of many bombs on this crowd of refugees who had taken shelter in the church resulting in the death of over 65 civilians including women and children and over 150 were seriously injured sustaining the loss of limbs.

Besides many were rendered homeless as many houses were razed to the ground and others heavily damaged, including our church and priest's house. All the people in this village have fled to safer areas as refugees.

Therefore we very earnestly appeal to Your Excellency to kindly instruct your forces to desist from bombing, strafing, artillery rocked attacks on civilian targets like Kovils, Churches, Schools and Hospitals."

- Bishop of Jaffna, Thomas Savundranayagam in a letter to Sri Lankan President Chandrika Kumaratunga – after  09  July 1995 Bombing of Navaly Church]

Yes, the President was responsible and left that karma for her heirs/successors who did not do their duty. Hence the resignation of the current President on the anniversary of Navaly Church Bombing – confirming ‘Man Proposes and God disposes’ – when man ignores the Truth – which in this instance was the 1977 defeat of Mrs Kumaratunga’s mother who brought in austerity which was also an economic collapse. But memories are short for those who gamble with politics.