Recently, my wise cousin Ravi said to me when I felt low about health issues – ‘we are born  for a purpose; until that purpose is achieved – we will not go, even if we wanted to.’

I felt good about it because as per my conscious knowledge, I have incomplete structures in family life and more importantly in public life through Sri Lankan issues. As a rebel, I need to write and give form to my beliefs. I did just that about my Australian experiences through my book ‘Naan Australian’  which found its way to the National Library of Australia, through Congress Library. To me, that is possible only through belief / Truth. As a rebel, I renounced the status and economic benefits of the official system. This took me to the level of citizens without portfolios. Then all my investments in institutional structures became ‘belief based intelligence’ known commonly as mindfulness by Buddhists.  Lord Buddha attained Nirvana / Naked full mind, on full moon day. He was born on full-moon day indicating this higher purpose as his mission in life.

The 2022 Tamil film Virata Parvam, is based on the life of a female Naxalite who renounced all her official portfolios in her village to become a Naxalite. Her attraction was based on the writings of the leader who gave up home-comforts to oppose and discipline the Police. That heroine was also born on Full-moon and was delivered by a female armed combatant in the forest. Virata is the name of the nation where the five Pandava heroes of Maha Bharatham lived the last year of exile incognito.

A true rebel would acquire such powers to win wars – provided s/he renounces all her/his official status and money benefits – which become ‘intelligence’ of Absolute power.

The mind that renounces that which it ‘thinks’ is ‘its’ becomes a full mind.

On that basis, is the following alert true or false?

[‘Do not panic over intelligence info about purported terrorist attack’ - https://www.dailymirror.lk/breaking_news/Do-not-panic-over-intelligence-info-about-purported-terrorist-attack/108-240321

The Defence Ministry requests the public not to panic about the intelligence information of a purported terrorist attack which is currently circulating in the social media.

While issuing a statement the defence ministry said a letter sent by the Inspector General of Police (IGP) to the Defence Secretary regarding the disclosure of a purported terrorist attack that may be carried out on July 5 and 6, evoking ‘Black July’, was taken up into consideration based on unconfirmed information received through intelligence sources. ]

If it is ‘intelligence’ then it works when kept ‘confidential’.  This is essential in subjective system – which Executive Presidency is. In Democracy, one needs to be transparent – so as to facilitate the self-governing ‘citizen’ to govern her/himself.

The above alert, if genuine, confirms gilt as depicted by the following picture sent to me by a Tamil Diaspora leader: 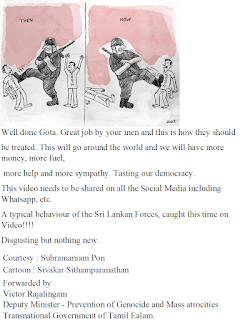 The question is whether the above is true or false?

What happened is true.  But the message is false. It would be true only if the LTTE guns are also shown to threaten the North with guns. Someone said that the ‘scale’ was different. That is like using ‘Buddhism Foremost’ article to claim governing status.

If the LTTE were fighting for ‘Freedom’ they would not have threatened Tamil civilians, including ‘Tamil Politicians’. LTTE were ruling the disenfranchised caste group. Given that the perpetrators were also Tamils, such killings were in revenge. The ‘thought’ of Nationalism was desire based in the case of rebels who seek political solution. Some members, like the Female Naxalite mentioned above, were true rebels. As per my indicators, Thamilini  who wrote openly about her life as a manager within LTTE comes close to being a true rebel leader of belief. But LTTE and its current heirs like the above group that sent the picture would not recognise her – because she was a woman and they want to ‘see’ and ‘show’ man’s outcomes.

Black July had its origin in LTTE , reported by Wikipedia as follows:

[The LTTE carried out its first major attack on 23 July 1983, when they ambushed Sri Lanka Army patrol Four Four Bravo at Thirunelveli, Jaffna. Thirteen Sri Lankan servicemen were killed in the attack, leading to the Black July pogrom where  up to 3000 Tamil civilians were killed across the island.[54]

Many consider Black July to be a planned rampage against the Tamil community of Sri Lanka, in which sections of the government were implicated.

The pogrom was premeditated, and was finally triggered by a deadly ambush on 23 July 1983, which caused the death of 13 Sri Lanka Army soldiers, by the Tamil militant group Liberation Tigers of Tamil Eelam (LTTE).  Although initially orchestrated by members of the ruling UNP, the pogrom soon escalated into mass violence with significant public participation

Thousands of outraged Tamil youths joined Tamil militant groups to fight the Sri Lankan government, in what is considered a major catalyst to the insurgency in Sri Lanka]

The questions to be asked here are –

(1) Without India’s training, would the LTTE felt the courage to oppose?

(2) Given that India’s training was subjective and towards protecting Tamils against Sinhalese attacks – was Indian government’s approval given for the above attack?

(3) If yes then the killing was by India. If no – then by claiming responsibility – did the LTTE confirm that it was seeking ‘official’ recognition and was no longer an invisible force/energy?

If yes, then that also facilitated their Opposition in Sinhalese – JVP in particular – to take the place of government soldiers  - as De facto force.

Is that not fair? – Dharma as we call it in Hinduism.

So is the government’s current interpretation true? No! because it is not belief based. Hence the warning is to distract civilians. Those who responded most strongly are the LTTE heirs who are for themselves.

If the government had gone into its truth – it would have known that it was not true. In the alternative if the President who led the war against the LTTE, had renounced his past position’s benefits, he would have developed mindfulness through which he would have identified the truth in this declaration of ‘intelligence’ and kept it confidential within the government.