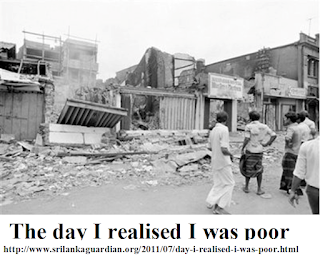 COLOMBO - THE GARDEN OF EDEN

Yesterday was the 39th Anniversary of the first day of the attacks on Colombo Tamils by Sinhalese. Yet most Sri Lankans, including Tamils, seem occupied with the attack by Armed Forces on the alleged ‘Protestors’. No one sent me messages about Black July.

But I remembered with feeling, former Daily News journalist Pearl Thevanayagam who wrote that she had asked her mother after losing their home in the 1983 riots, ‘Are we poor mother?’. Back then, on the 2011 Anniversary,   I felt the bewilderment of the 28 year old – as if I was on the streets. Pearl being a genuine journalist shared her own experience of the 1983 civil riots:

[When school boys from Royal, Ananda and Nalanda set about looting, burning and plundering the properties of Tamils in Colombo with the blessings of the government of J.R. Jayewardene under the direct guidance of PM Ranasinghe Premadasa and ministers Gamini Dissanaike and Cyril Matthew, tens of thousands of Tamils who made South their homes were herded into camps in Kovils, airports, schools and temples.

While I stood outside a Sinhalese neighbour’s house in Nugegoda who gave refuge to us for a few hours after our possessions belonging to several generations were set on fire before our very eyes until a matriarch asked us to leave and we were on the streets I asked my mother, “Are we poor now?”. She replied, “ Yes”.]

Pearl is physically no more with us but her journalistic work is a soul-value exponentially shared with her readers who shared in her true experience, as if it were theirs.  In terms of the 1983 riots, such sharing protects those who remember and feel, from future attacks. They may be attacked physically, but mentally they would take it positively – as Gandhi did.

Relative to Black July 1983, the dismantling of the ‘Protestors camps’ by the Armed Forces and the resulting pain is like a mosquito bite. From Australia to USA – mainstream media are publishing  report  after report as if that was the worst pain that happened in Colombo. What a farce!

Truth alone can redeem us from this mess. A place has karma. Hence some places are sacred and others are haunted. Foreign media need to be careful not to be infected by the haunting spirits of Colombo that continue to be restless due to destruction of People, hard earned and sacrificially saved property. If they are casual about what’s happening – they would get infected and manifest it in their own homelands.

Karma cannot be ‘settled’ through current benefits. It can be made positive by feeling the victim’s pain as ours. The rest will lead every related action of the perpetrators – in this instance – the ‘civilian protestors’ – whose predecessors  ‘set about looting, burning and plundering the properties of Tamils in Colombo’

Until an action becomes a sin, we can correct it or be punished for it. But once it is beyond its period of correction, like the evil serpent in the garden of Eden, the sin  leads the person/group, including those who were responsible for disciplining wrong-doers but failed to do so.

In 1977, the UNP government won an overwhelming majority which led to  the formation of the Executive Presidency. The group that gave the power acted as if it were the Executive President. Likewise, in 2019 – war hero Mr Gotabaya Rajapaksa won majority power to renew the Executive powers of the President. The group that elevated his status took over power – all with the support of the media. Majority power is registered as Executive power not only by government but by the group that has majority vote. It is to prevent this that Opposition is recognized as Equal power in Parliament. But where the opposition is also driven by majority power in its area of governance, it becomes a dependent junior. Ranil came to power due to his demonstrated commitment to law. So long as his current actions are within the law, no foreign power has jurisdiction to intervene. The leader respectful of law, will not abuse Executive power as majority power. That respect and therefore the law will not let him.