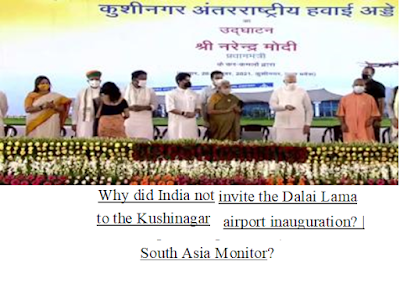 [In politics, a de facto leader of a country or region is one who has assumed authority, regardless of whether by lawful, constitutional, or legitimate means; very frequently, the term is reserved for those whose power is thought by some faction to be held by unlawful, unconstitutional, or otherwise illegitimate means, often because it had deposed a previous leader or undermined the rule of a current one. De facto leaders sometimes do not hold a constitutional office and may exercise power informally.] Wikipedia

Concern has been expressed through the article by Indian citizen at - Why did India not invite the Dalai Lama to the Kushinagar airport inauguration? | South Asia Monitor :

Tibet is a Buddhist region with great tradition and philosophy reflecting the virtues of Lord Buddha’s teachings. There are several historical Buddhist shrines in Tibet.]

As per the above article, it was a political function using the name of Buddhism and not a spiritual ceremony. The true purpose is confirmed to a genuine seeker – by the effects. The author states also:

The answer in the author’s ‘intelligence’ is highlighted as follows:

[Unfortunately, China aggressively entered Tibet decades back, massacred thousands of Tibetan protestors, and is now occupying and ruling the region with an iron hand.

India has done the historical and grave mistake of recognizing Tibet as part of China. Millions of Indians are very unhappy about the Indian government's ethically and morally wrong decision to approve China’s occupation of Tibet.]

This is the parallel of what happened to Tamil homelands in Sri Lanka’s North and East. In his article headed

‘Terrorism’ or ‘Liberation’? Towards a distinction: A Case study of the Armed Struggle of the Liberation Tigers of Tamil Eelam(LTTE)’, Dr Muttukrishna Sarvananthan highlights as follows:

[On the issue of propaganda, the following observations by Guevara are very relevant and opportune to the case of the LTTE. “One of the characteristics of revolutionary propaganda must be truth. Little by little, in this way, the masses will be won over. …observing always the fundamental principle that truth in the long run is the best policy. The radio is a factor of extraordinary importance………However, the radio should be ruled by the fundamental principle of popular propaganda, which is truth; it is preferable to tell the truth, small in its dimensions, than a large lie artfully embellished.”]

This applies equally to Tibet also. The function was to open the airport – which is the parallel of Mattala Rajapaksa International Airport in Hambantota area. If the Dalai Lama was true to himself he would not participate in the opening of an airport. The presence of Buddhist monks to my mind, is the artful embellishment of a political ploy.