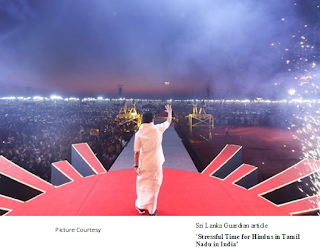 As per the latest feedback from Tamil Nadu, one wonders whether Tamil Eelam is already a reality in the minds of LTTE supporters. If yes, one needs to probe as to how that happened?

[In an April 2009 interview to NDTV, Karunanidhi made a controversial remark stating that "Prabhakaran is my good friend" and also said, "India could not forgive the LTTE for assassinating Rajiv Gandhi". An interim report of Justice Jain Commission, which oversaw the investigation into Rajiv Gandhi's assassination, had indicted Karunanidhi for abetting Rajiv Gandhi's murderers, who belonged to the Liberation Tigers of Tamil Eelam (LTTE). But the final report contained no such allegations.]

As per my knowledge – the LTTE leader consciously and actively prevented religious influence within his group. Hence that was a common factor that bound the two leaders. This was confirmed through the NDTV in April 2009. Velupillai Prabhakaran’s journey as LTTE leader came to an end in May 2009. One needs to ask the question as to whether Velupillai Prabhakaran effectively committed suicide after the Tamil Nadu leader stated ‘India could not forgive the LTTE’

When the mind goes down one defeats oneself. As quoted recently:

[In classical Freudian psychoanalytic theory, the death drive is the drive toward death and destruction, often expressed through behaviors such as aggression, repetition compulsion, and self-destructiveness.] - Wikipedia

In Hindu philosophy such folks are grouped as Asuras. Those who are driven by soul power are effectively classified as Divine beings known as Thevar. In Tamil Hindu philosophy – personified by Lord Muruga ,Soorapathman was a powerful Asuran. When Muruga diffused his power – Soorapathman was added to Muruga as Seval (Rooster) and Mayil (Peacock). They are both part of the animal world with lesser common physical lifespan than Humans. The two cannot be measured by the same yardstick. Likewise those groups that are driven by philosophy on the one hand and by visible outcomes on the other.

The work of the physically driven has short lifespan and hence loses value early and without heirs. Death happens through the Equal other side which is not raised to the policy level common to all in their home group. To the extent LTTE failed to raise their work to policy level – they committed suicide. Chief Minister Muthuvel Karunanidhi’s disapproval of the LTTE would have contributed to the demise of the LTTE which demonstrated that it was driven more by physical occupation to claim ownership than common philosophy.

[Since the DMK party came to power in the month of April,2021, the leadership of DMK party has been targeting Hindu religion  with some sort of venom and  targeting to belittle the religion.]

[Stalin handed over appointment orders of the HRCE (Hindu Religious and Charitable Endowments) dept to trained aspirants of all castes as temple priests on August 2021. Stalin quoted the reformist leader Thanthai Periyar in an official release which said Periyar fought for equal rights in worship for all those who believe in God. ]

Periyar opposed high caste leadership in temples and endured the resulting losses. To my mind, Priests leading in temple  is the parallel of Lawyers leading the courts. In Australia, where a lay person by law is facilitated to represent her/himself I chose to represent myself and endured the parallel of Periyar’s pain. In Sri Lanka – especially in North – this is yet to be the case.

As per the Print report of 14 August -  ‘Chief Minister M K Stalin handed over the appointment orders of the Hindu Religious and Charitable Endowments Department to 75 persons here marking appointments to 208 positions under various categories.]

His struggle against the Judiciary is presented as follows by Wikipedia:

[He came to limelight when he was jailed in Central Prison, Madras under the Maintenance of Internal Security Act (MISA) for protesting against the Emergency in 1976. He was beaten up in custody and a fellow DMK prisoner C. Chittibabu died of injuries and police torture while protecting him. He wrote his final year BA exams while in prison. Stalin formed the DMK youth wing. In 1982 Stalin became the youth wing secretary of DMK, a post he held for more than four decades]

The parallel of the 14 August action in his own experience would have been to represent himself in Courts. There is no report that this happened. There are Hindu temples where lay folks do perform the poojas. At our family temple in Northern Sri Lanka I perform the poojas as per our family tradition. But other lay folks do not. Not that I have a rule against it but no one has shown interest in it – especially due to the requirement of being vegetarian and being teetotaller. Such abstinence contributes towards transcending the physical. Likewise, in a court of law – one needs to be able to respect the judges who occupy the seat of Truth which is the most reliable judge of all. The parallel of Truth in Court is God in religious institutions. The parallel of Human Judge is the Chief priest. In traditional temples the power of the priest is derived strongly through belief. This would be lacking in new structures that are more democratic. In a just system, one should not have to be suppressed to make way for the other.

Of greater concern is the way Sri Lankan Tamils are being treated as juniors. As per Wikipedia:

[In August 2021, Stalin ranked first among all Chief ministers of India with 42% in favour, in the "Mood of the Nation" survey done by the India Today magazine. Stalin changed the name of Sri Lankan Tamil Refugee camps to ‘rehabilitation camps' and said "They are not orphans, we are there for them". ]

The status of Refugee carries more dignity than the status of ‘criminal’ who needs rehabilitation. In India, Sri Lankans have to be treated as Equals and not as juniors or seniors. Such arbitrary name changes confirm that Sri Lankan Tamils in India’s Tamil Nadu  have been taken-over by this current leadership – as if they were Eelam Tamils and therefore juniors to Indian Tamils. It began with then Chief Minister MGR giving money and LTTE leader Velupillai Prabhakaran addressing him as Anna / Big Brother.

Stalin may be an atheist. But he has the duty to place Truth as his God and the secular pathway as the way to that Truth. This prevents interference with other pathways – especially the religious pathways.

The lesson to be learnt is in Sri Lanka where also leaders started taking the easy pathway of money and became trapped by Communist leaderships. Wikipedia reports as follows about SWRD Bandaranaike who was murdered by a Buddhist Priest:

[As prime minister, he took a neutralist stance in foreign policy, but established diplomatic relations with the People's Republic of China and the Soviet Union. He removed the British air bases at RAF Negombo and RAF China Bay and the naval base at Trincomalee.]

Now China has ownership in Southern Sri Lanka through the heirs of SWRD. The parallel of that in India would be Stalin coughing up a port to China through Eelam Tamils who have given up on belief in God without developing a secular pathway to Truth.