Dayan Jayatilleke has interpreted the Sri Lankan President as follows in his article headed ‘Neither realist head nor humanist heart’:

[The Gajaba regiment seems (at least) as much the President’s family as the Rajapaksa clan.

Everything they learned about leadership, they were taught by General Vijaya Wimalaratne, he said. Those familiar with the quite distinctive approaches of Gen. Denzil Kobbekaduwa (Sandhurst, RCDS) and Gen. Wimalaratne can read the code. ]

I identify with this through my own experiences where workplace relatives merge with biological relatives. The reason is the law being a uniting measure. Beyond that is truth. But Dayan Jayatilleke goes on to state:

In his Saliyapura speech President GR declared that next year he would introduce a new Constitution and electoral system.

Why did he speak about a new Constitution, electoral changes and agrarian policy, issues not usually classified under strategy/security/defence, at the Gajaba regiment’s headquarters rather than at a traditionally civilian-democratic venue and on a civilian occasion?

The answer is in the following part of the President’s speech:

[We need to address the issues that caused terrorism. We should develop those provinces. It is necessary to raise the living standards of the people in those areas……As I was ascending the steps to worship the Ruwanwelisaya, a young monk told me that; “the President said ‘one country one law’ will be introduced and that we were waiting for it”. I will fulfill that promise within this year.]

The challenge  however is in article 9 which confirms that the Constitution recognises more than one religion and that Buddha Sasana / law is rendered foremost place. That article was given birth by Mrs Banadaranaike. Is the President promising improve on that and recognize Sri Lanka as a Buddhist only state? That seems to be Dayan’s interpretation:

[The President’s very last card being the military (especially his old regiment), perhaps he intends to play his penultimate card: the Constitutional declaration of Sri Lanka as a Sinhala-Buddhist State, de-coupling from the Indo-Lanka Accord with its “multiethnic” preamble, abolishing the 13th Amendment, shrinking provincial devolution, and denouncing those who oppose the new Constitution project as traitors. ]

Tamil leaders need to present to the Parliament their own preposition to recognize Sri Lanka as a multi-religious nation and confirmation of the applicability of Customary laws – Kandyan, Muslim and Thesawalamai laws. If Buddhism is the only law recognised – then all these Customary laws would need to be repealed first. Thesawalamai in North is essential to maintain traditions of the North. The communication in the Appendix confirms the belief that such customary laws empower believers. 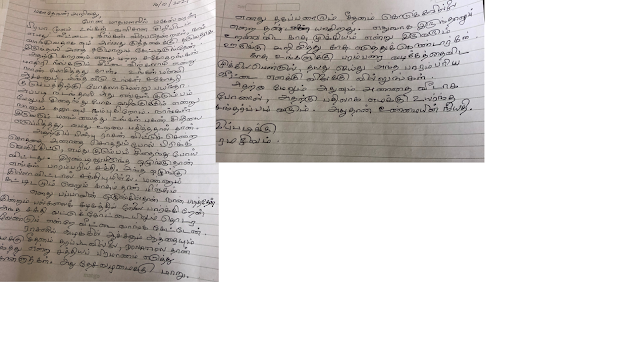