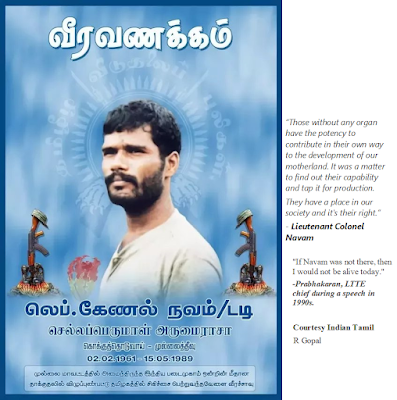 As a Sri Lankan Tamil, what is the highest position I would vote for ? The answer from within is – as Equal position as ruling person. Likewise here in Australia where majority are whites. The strength of this was highlighted through the 1977 Sri Lankan Parliamentary elections preceded by the Vaddukoddai Resolution which confirmed that Equal Opposition position through the United group known as TULF. Its origins are presented as follows by Wikipedia:

[On 4 May 1972, several Tamil political groups, including the Federal Party (ITAK), Ceylon Workers Congress, and All Ceylon Tamil Congress formed the Tamil United Front (TUF) under the joint leadership of S.J.V. Selvanayagam, S. Thondaman, and G.G. Ponnambalam. The TUF changed its name to Tamil United Liberation Front (TULF) and adopted the demand for an independent state to be known as the "secular, socialist state of Tamil Eelam". The CWC declined to extend its support to the newly formed TULF.]

In 1977 the goal was achieved. But those who are driven by the physical interpret it as ‘country’ and not as ‘nation’. The CWC’s stand is explained by the following:

[In the March 1965 elections, Thondaman shifted to the UNP to protest against the terms of the Indo-Ceylon Agreement of October 1964. After the victory of the UNP in 1965, S. Thondaman and Veloo Annamalay were named as nominated as  Members of Parliament. He was out of Parliament from 1970 to 1977 after the defeat of the UNP in the general election of 1970. During this period the CWC under his leadership gradually allied itself with the major Tamil political parties and subscribed to form the Tamil United Front (TUF). He was also elected a leader of the triumvirate leadership of this Tamil political organization.]

To be a sovereign community, Tamils had to include the group – then recognized as ‘Indian Tamils’. Without them our connections with Tamils of India become weak. Even though CWC did not join the TULF, the TUF membership confirmed their intent to be part of Sri Lankan Tamil community. They are missing from the Tamil Political group that is claiming Tamil Nationalism. This ‘forgotten ‘group’ is now Politically with the Rajapaksa government.

Lieutenant Colonel Navam is an example of Tamils in Sri Lanka who were alienated by Jaffna Tamil combatants despite the LTTE leader respecting him at the highest level. If we do not recognise and value such folks who fought for their local community against the mighty Indian army then their power is lost to us which has the effect of favouring the opposition. Navam’s dedication has thus been added to the Rajapaksa side.

It’s interesting that Mrs Bandaranaike lost in 1977 Parliamentary elections which were the first after the 1972 Constitution was drawn with Buddhism Foremost article. Why so? Because her husband was killed by a Buddhist monk. If the lady had felt the loss genuinely she would have not blocked the power of faith overriding the relative, downward pulling forces. To the extent Non-Buddhists distanced themselves from those who practiced Sinhala-Buddhism foremost policy their belief would form natural opposition Energy at government level. Belief is self-balancing Absolute power. Even the believer has no control over it after it goes beyond local level. Like in the case of Corona virus – this is exponential in its occupation – once it leaves its local area.

All those who believe they are Sri Lankans but are excluded by the ‘Buddhism Foremost’ article - have the power to establish Equal Opposition through belief in their own religion. Those who compete with this article would be limited to the relative power. In terms of Tamils who claim nationalism through Indian support – they would become junior Tamils until they are global Tamils. Likewise, Buddhists who seek to be global Buddhists including through China.