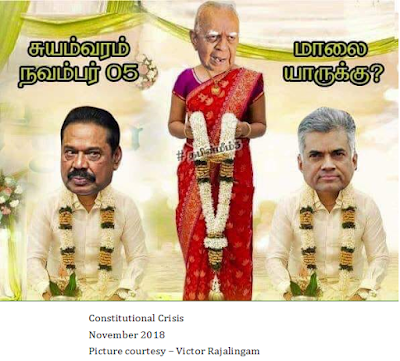 The Common interpretation of the current crisis in Sri Lanka, contains also the Natural solution to the Ethnic problem. Majority Sri Lankans are driven by their own sense of rights and wrongs. It is therefore to be expected that leaders driven by majority vote would eventually ‘think’ that their interpretation is the law. That is also majority power.

When laws are made by elected members of Parliament – it is their interpretation that is accepted as the right interpretation of the law – at least during the initial stages. I believe that the 19th Amendment to the Sri Lankan constitution happened due also to the claims of war-crimes by the Tamil community – empowered by the Diaspora. The pain of Mothers of those killed or disappeared in the war, to the extent it is true, would live through Sri Lanka’s true mothers. A mother is not likely to understand the law intellectually. To majority mothers of Sri Lanka – their feelings based truth is their  law.  Truth being eternal would find its medium to manifest Itself. Truth is the Truth – and is beyond the measure of rights and wrongs.

In this context my email interview with Professor Niranjan Maheswaran is as follows:

Professor wrote [Hello:Please remove me from this mailing list because I get most of what you send via multiple sources.

Very many thanks
niranjan]

You have written  in your today’s article The Story Of Seeing Nuance From The North, about your recent visit to Sri Lanka:

“It was enjoyable because my mother is no longer alive to give me strong instructions, as she had done on every visit. Soap should be in a soap case, not wrapped up in a piece of cling film. Temple should be visited. Pooja should be performed. Tuk-tuk rides should not be taken after dark. Politics should not be spoken to tuk-tuk drivers. “How much did he charge?” “Rs. 500.” “Five hundred?” the economist in her would protest instantly, “Ah well, money going to a poor chap anyway, no” the Sri Lankan in her would compromise.”

What you did not know – despite showing ‘credentials’ in Electronic philosophy – was that your mother in Shakthi / Energy form came into me also – to keep you within the regulated pathway that has led you to becoming who you are today. Your mother’s Energy is saying to me ‘Continue to be strict with my son’ who lacks discipline and gets carried away and gets Eustress. Why was I chosen as the medium?

I am a strict mother. I was writing from Melbourne during the last one week. I went to Melbourne from Sydney – because our granddaughter is doing her University Entrance exams. ; and our son had to go to New Zealand as part of his work. All I did was to cook the food that the young one liked – the way she likes it and then sitting down to have all three meals with her.  I believe, I shared my Energy with her. The outcomes would be satisfactory to me whatever her grades – because she is already getting trained in workplace discipline –. If she chooses to go into hospitality industry she would connect to that Energy at early stages. If not at the deeper level. This is also what I do with the folks in Sri Lanka – North as well as in Colombo. Your articles confirm that you lack experience as Sri Lankan in Colombo. I have both – Jaffna as well as Colombo experience as Sri Lankan. Your mother says – bow to this lady and include yourself in the Naturally wholesome Sri Lankan when you write publicly. In technical terms –- dealing at Matter level instead of energy level  your pathway is to go back the same way you came into my forum – i.e. – through your articles about Sri Lanka’ North. Stop them and earn the ‘privacy’ through the regulated pathway – the same way your mother said not to talk politics to the unknown tuk-tuk guy.

I believe that Energy is eternal because Truth is eternal. To become Energy one needs to lose consciousness of the ‘form’/matter. Often the intermediate stage is the mind driven by law – including personal law.
Law taken from others to ‘show’ matter leads to the liquid stage / the intermediary stage. It is by attributing credit to the original sources of the law that we become co-owners and are then capable of working the system naturally without hurting someone else’s earned space and privileges. Majority Indian-  ‘law and order’ establishments carry Gandhi’s picture because Gandhi’s Truth is the law of the Independent Indian citizen – until they become the local Gandhi – as the Hon  Kumaraswami Kamaraj became and was known as the kingmaker of India.

By practicing the law we add our Energy to the origin. Highest level practitioners are  often not likely to  be the ones to hold the official positions – in this instance Mr Sirisena or Mr Wickremesinghe. They are more likely to be the ordinary citizen without portfolio – feeling for the whole that s/he feels part of. Their real vote happens through feelings. Those using the external law that has worked for others, would tend to develop high and broad structures that would facilitate many to participate and also download the Energy of  those before us to whom that environment was home of positive structural value.

The original sources in such cases  are usually not the law makers who use the structure to elevate their own contributions and rightly so – so that others could also participate and Energize them from far.

In the case of the current Sri Lankan crisis, the 19th Amendment to the (Constitution the provisions of which are the main measures to know rights and wrong ) was drawn up when victims of war were still in pain. To most of them it was wrong that they were suffering. Their politicians and extended community living outside Sri Lanka, told them so. Majority were less educated than the citizen living in Colombo with active opportunity to access multicultural  facilities. Hence the direct victims  lacked the cognitive power to identify with the picture shown through the law. This is true also of Mr Sirisena and Mr Rajapaksa – both of whom seem to be driven by their own personal laws.

To the extent those personal laws are as per the truth demonstrated by them their interpretations override the letter of the law – interpreted by the global community that does not feel Sri Lankan. But even one Sri Lankan feeling it is wrong would confirm that the interpretations are not as per their truth but wishful thoughts.

If indeed such a ‘Feeling Sri Lankan’ is in Parliament – then the law personal to Sri Lanka would be born through majority vote. This may NOT  look anything like the provisions in the 19th Amendment nor the provisions in any part  of the constitution. If that is the case – war-crimes as per Common global citizen on whose behalf the UN listed the LTTE as a terrorist organization, is proven. If indeed the outcome confirms the same picture as the law interpreted by the Common global citizen – then the war-crimes issue is confirmed to be  manageable at  local level through such a parliament which would qualify as the parliament of a Sovereign nation.

Thus this political crisis  is very much an extension of the ethnic issue that has made Sri Lanka notorious at the global level. This was highlighted by a global minded Sri Lankan of Sinhalese origin as follows: