‘The power outage caused traffic jams in Colombo, as traffic lights stopped operating, and water supply was impacted as pumps stalled without electricity.’

[According to Sri Lanka’s Power Minister Dullas Alahapperuma, the blackout was caused by a “technical issue” at the 300 MW capacity Kerawalapitiya power plant near Colombo around noon on Monday. After visiting the plant, Alahapperuma ordered his ministry to look into the outage and file a report within a week.]

If it was a technical issue the timing and coverage would have been different. This is a structural fault at the root / karmic level.

Believers in karma would look for internal indicators particular to that area. The following is one such indicator:

The US$300 million power station was supported by a €152 million debt component through HSBC, which was supported by export credit agencies in the United States, Germany, Netherlands, Poland, France, and Austria]

On 12 August the new Government headed by Mr Mahinda Rajapaksa was sworn in by the President. On that day flags without the stripes that represent minorities were flown by someone in Kandy where the ceremony took place. The flag was actually not Sri Lankan National flag but Hambantota flag:

The explanation presented about this flag by Wikipedia is:

The picture published by Belt & Road News confirms that the flag at the Colombo Presidential Secretariat was also Hambantota flag: 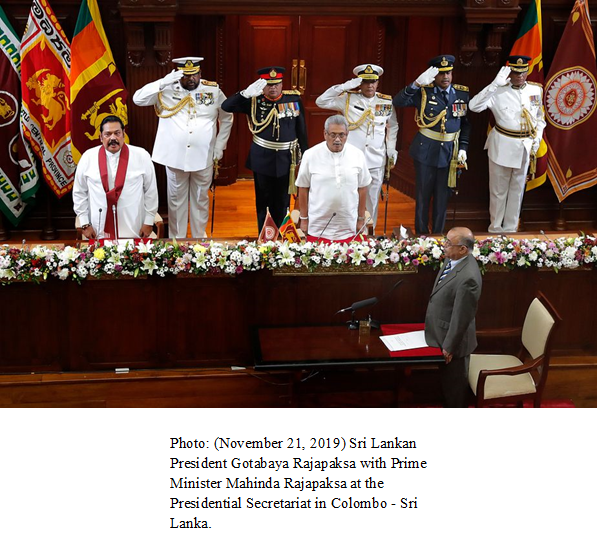 Devinuwara Deity (highlighted above) - Upulvan is presented as follows by Wikipedia:

[Upulvan is a guardian deity of Sri Lanka. Sri Lankan Buddhists believe him also as a protector of the Buddhism in the country. The name Upulvan depicts his body colour which means "blue water lily coloured". The cult of Upulvan started during the medieval period in Sri Lanka and later the deity was identified with the god Vishnu (Vishnu deviyo) of the Hindu tradition.  According to the local lore and legend, Upulvan is the god whom the Lord Buddha entrusted with the guardianship of Sri Lanka and Buddha Śāsana of the country.

At the end of the 15th century, god Upulvan was identified with god Vishnu of Hinduism, which could be attributed to the resemblance of the two deities and to the Hindu and Brahmin influence that prevailed during the times of Kotte Kingdom. Thereafter images of Upulvan as lord Vishnu were set besides the images of Lord Buddha in Buddhist temples throughout the country.. After the identity of god Upulvan was merged with god Vishnu, the use of name Upulvan slowly disappeared and the worship of Upulvan as Vishnu was spread throughout Sri Lanka. The deity was important for the Abisheka coronation rite]

In summary – Lord Buddha entrusted the guardianship of Sri Lanka to Hindus like myself. With that realisation – the penny dropped:

I received the email re the removal of minority representation in the Lankan flag – on the day of the swearing in ceremony from a fellow Lankan Hindu – confirming that his structure in worshipping Vishnu was in pain at this time – which is Abisheka (Holy Bath) / Coronation time. I noted it but did not think more deeply  about it.

Then on 15 August – the day of India’s coronation my email headed  ‘Tamil Independence Structure Damaged in Jaffna’ which I forwarded to  Ceylon Electricity Board – Jaffna in the University listing was returned with the following message:

Delivery has failed to these recipients or groups:

There was a reason why I included the CEB-Jaffna  in my list. I was a victim of their faulty meter readings and they did not correct themselves despite the arduous efforts on my part to educate them. I could not see my family elder Mr N Sanmugaraja’s (who was GM of CEB) investment in Administrative structure there.

I kept sending  the emails until yesterday when I felt that they did not deserve to be included. That list prior to deletion of CEB was to the following, which includes the President’s Viyathmaga group and many Australian academics, as well as Jaffna’s Political Leader -  Mr Sumanthiran:

But my reward came from a fellow Australian Tamil who asked me in response to my yesterday’s mail:

[Gaja, what percentage is  Lankans in your Venn diagram? What could they do in this case? To a great extent i consider myself as Lankan owing to how and where I lived from school days to working period and associated interactions with others. I can't ignore or forget the lovely and intimate life I had with  other communities…….

…..Madam Gaja is one such qualified judge, who will continue to write so well and elaborately even after her soul had departed. ]

My response was as follows:

[I believe that you will continue to read my work even after your soul has departed. In both instances – our souls become common. Our bodies are different unless we are so attached that we come back to the same group. In Hindu funerals they use paddy that would not sprout again for this reason. If our sins are greater than our virtues – it would be better for both – the departed and the living – that we do not come back to haunt.]

The message about the flag sans minority representation came from the Guardian group of Common Lankans who believe in Vishnu in whom Upulvan is also included. In  Buddha’s Lanka the Guardianship rests with Vishnu-Upulvan who is Multicultural in looks.

[Kotte era poem Panditha Perakumba Siritha describes a story of how god Upulvan transfigured a log of a kihiri tree and floated it to the sea beach of Devinuwara kingdom in Southern Sri Lanka. On the night prior to the incident, King Dappula I (661-664) who was the reigning monarch, had a dream about the arrival of this transfigured kihiri log. Accordingly, the king and his people rushed to the beach and recovered the kihiri log. They carved the god's figure out of the kihiri log, and brought it ceremonially for enshrinement. The poem further states that the wood of the said kihiri log was also used as a medicine for treating various diseases.]

The above description is common to Lord Dhanvantari who is the Lord of Ayurvedic Traditional Medicine and as per the Hindu legend of Milk Ocean -  appeared when the ocean was churned by the gods on one side and Asuras / Brawn powered men  on the other. Kiri in Sinhala means Milk.

The Coronavirus is the enemy of Kings/Governments. The Silk Road heritage is largely Ocean pathway and to simple believers like myself and Aborigines of Australia who worship nature and Ancestral powers the early indications would confirm structural damage to the heritage. Our Victorian Premier who signed outside Due Process – has had to commission the Australian Defence Force to combat the disobedience of Victorians who are refusing to cooperate with the Government. This is also why the Sri Lankan Armed Forces were deployed by the President. The Navy which did not confirm that it was the custodian of protection powers of Sri Lanka had high level of infection for the same reason.

The power outage was not merely technical. It was indicator of structural damage to civilian administration. The more the Lankan Government shows separation and denial of natural positions as per the heritage of minorities – the greater the risk of intellectual outages which confirm that the Guru is missing.