Sri Lanka’s Jaffna District electoral outcomes were discussed with Political leader Mr M Sumanthiran, by Ms Renuka Thuraisingham of SBS Australia. The interview has been published under the heading ‘They did not listen to me; those who plotted against me lost - Sumanthiran’ – at  https://www.sbs.com.au/language/tamil/audio/people-s-ruling-alone-is-important-m-a-sumanthiran?cid=lang:socialshare:facebook

I do not know about Ms Renuka Thuraisingham, but I had to do considerable research to find out how Sri Lanka’s Preferential Voting System worked – especially considering that SLFP candidate Angajan  Ramanadan     scored highest votes and there was dissatisfaction within the candidates presented by the main party ITAK which as a party that  scored 42% in Jaffna Electorate. Victory of an individual is personal. That of a party is institutional. The stronger the Political Institutional structure – the better their performance in Public Administration. Reading the needs of voters in the context of their home areas is important in escalating issues to national level and beyond.

As per Daily News report, the overall Jaffna results were as follows.

The Sri Lankan Ballot Paper looks like the one below: 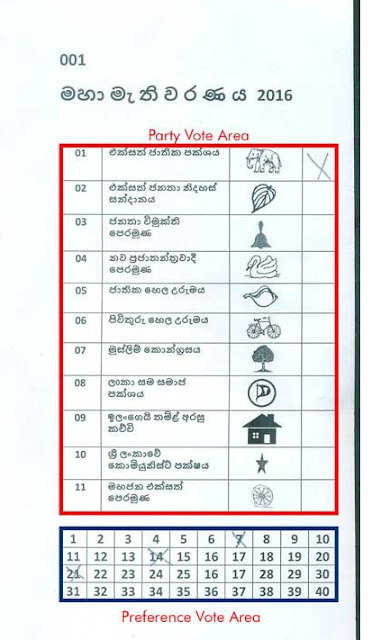 The Party section is fairly simple. The one below has ‘candidate’ numbers for the whole Electorate. In single division electorates the top and bottom as per my mind would be identical. But where an Electorate is made up of multi-divisions one party would have multiple candidates. -  Hence even though Mr Angajan Ramanathan polled 6,214 in his local division / sub-electorate of Udupiddy, if he had been ticked  by more people in say Kilinochchi area which also falls within the Common electorate of Jaffna, he would get more votes. The Election Commission explains the voter process in relation to this,  as follows in its Ballot paper:

The above confirms that the bottom is for the whole Electorate whereas the top is only for the division/sub-electorate. Obviously each voter must get the list of which candidate is represented by which number.

Thus even though Ms Sashikala Raviraj came first in Chavakachcheri she did not make it to the wider Jaffna Electorate. Mr Wigneswaran whose party  on the other hand did not come first in any of the divisions/sub-electorates, won a seat in the wider Electorate which to my mind, is like the Senate for that group.

All that was NOT explained by Mr Sumanthiran in his interview with Ms Renuka Thuraisingham of SBS Australia.  The leader needs to speak the language of the voter. Mr Sumanthiran as the senior of Ms Sashikala Raviraj had the duty to educate her and use that as the base when explaining to wider world. He kept saying parrot-like that we have to wait until the final results were announced. He did not say ‘why’ that was so – to the Tamil Diaspora in Australia either. That was undemocratic.

We also need to consider as to why we the simple-minded voters have to go through this when in Parliament they use the simple majority test of yes or no. The parallel of the Preferential Voting system in Parliament – is the voting for  laws. When making laws the Parliamentarians have the duty to lay before the members all Bills presented up to that time but have not successfully gone through to become law. Each law is competing with all others before the members at that time.  In the first round, where the first ranking draft law does not get more than 50% of the votes, those laws that did not make it to first two places are eliminated and their validity redistributed as per the preference marked against them – starting from the lowest ranking draft law until one or the other of the first two gets more than 50%.

Preference Vote for the Gander has to be Preference  Vote  for the Goose also. The thread of belief needs to be raised to making of law on Equal Footing to Voter and Parliament. The deeper the identity of the voter with the elected member or the issues presented by that member – the greater the reliability of lawful conduct honouring laws that s/he makes.