Article 3:  In the Republic of Sri Lanka sovereignty is in the People and is inalienable. Sovereignty includes the powers of government, fundamental rights and the franchise.

The Franchise was recently exercised by the People to endorse the Rajapaksa family as their government. To anyone who is unhappy with this unity between the first and the third components mentioned above, the avenue available is through Fundamental Rights. Fundamental Rights are covered by Chapter III – which begins with article 10 and ends with article 17 which facilitates the dismissal of Executive decisions by the Judiciary:

[Every person shall be entitled to apply to the Supreme Court, as provided by Article 126, in respect of the infringement or imminent infringement, by executive or administrative action, of a fundamental right to which such person is entitled under the provisions of this Chapter.]

I do not know what the Australian parallel of the above is. But I believe that the Truth within me guided me to connect to Judicial power when I was discriminated against within Public Service. My form of truth in this regard was the investment I made in professional ethics. That to me was normative ethics constructed by my profession. This to my mind is the parallel of Article 9 of the Sri Lankan Constitution which requires as follows:

[9. The Republic of Sri Lanka shall give to Buddhism the foremost place and accordingly it shall be the duty of the State to protect and foster the Buddha Sasana, while assuring to all religions the rights granted by Articles 10 and 14(1)(e).]

The above tells us what to do and covers specific environment bounded by sovereign borders. Articles 10 and 14 define fundamental rights. They are based on meta-ethics. When we complete normative ethics we naturally join the pathway of meta-ethics and hence qualify to be supported by the Universal power of (in this instance of Democracy) which would lead us once we merge with it. Once when I said something similar, Dr Christopher Pulle who led a small group of Josephians said words to the effect ‘that is meta-physics’. Now I better appreciate what Chris meant. I believe that this is what is referred to in Hinduism as Prapancham / Prakriti – the natural power of Universe. We may call it God, Love or Truth. We don’t see it but identify with it through experience. The Fundamental rights so recognized by Sri Lankan Government is in the Fundamental Rights chapter of the constitution. They confirm the connection to global powers.

The beauty of this is that even if the Judiciary fails us – that Universal power delivers as per our truth. I believe that it was through the members of that system that my book ‘Naan Australian’ got carried to the National Library of Australia without any input on my part. This morning that membership within me was invoked by the following by News Wire: 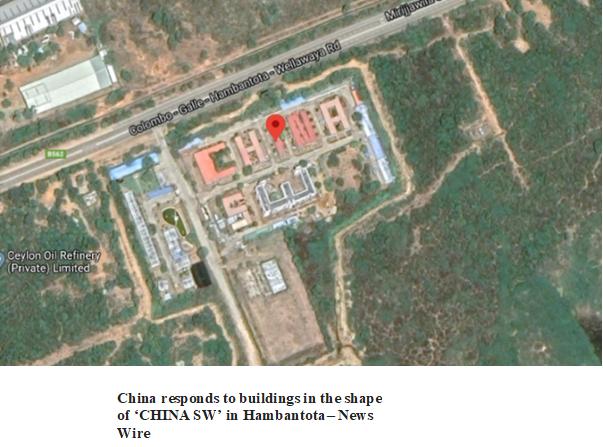 [The Chinese Embassy in Sri Lanka has responded to reports on Social Media on a group of buildings built in a manner to spell out ‘CHINA SW’ in Hambantota.

The buildings reportedly in one compound adjacent to each other was first spotted on Google Maps under the address China SLK Harbour Services, Marijjawila- Sooriyawawa Road, Hambantota.

Responding to these speculations, the Chinese Embassy in Sri Lanka clarified via Twitter that the buildings were designed as ‘CHINA ❤️ SLK’ by the China Harbour Engineering Company (CHEC) when constructing the Hambantota Port.

“A story of development and love. Best wishes to #HambantotaPort”, it added.]

Majority Sri Lankans have overwhelmingly voted for the Rajapaksas whose name dominates in that part of Sri Lanka – where they claim ‘birth-rights’. A Lankan journalist who wrote strongly against the Rajapaksas said to me after the Easter bombings that there won’t be any dynasties in Sri Lanka. The journalist was not against Chinese infiltration.

Back in 1815, the British invaded through the Kandyan Convention:

[The Kandyan Convention  was an agreement signed on 02 March 1815 between the British and the chiefs of the Kandyan Kingdom, British Ceylon (now Sri Lanka) for the deposition of King Sri Vikrama Rajasinha and ceding of the kingdom's territory to British rule. The king, of South Indian ancestry, faced powerful opposition from the Sinhalese chieftains who sought to limit his power. A successful coup was organized by the chieftains, marking the end of 2358 years of self-rule on the island and resulting in the imprisonment of the king in Vellore. The treaty is quite unique in that it was not signed by the monarch on the throne but by members of his court and other dignitaries of the kingdom.]

[Her paternal ancestry included her uncle Sir Jayatilaka Cudah Ratwatte, the first person from Kandy to receive a British knighthood,  as well as courtiers serving Sinhalese monarchs.  One of these, Ratwatte, Dissawa of Matale, was a signatory of the 1815 Kandyan Convention ] – Wikipedia

Ms Ratwatte produced the 1972 Constitution which is an achaaru / pickle of Buddhism and Secularism. The above heritage confirms that the lady did not have strong heritage to declare that Sri Lanka was an independent republic.

Whenever we are weak as per our current systems, Karma takes over and leads manifestation for better or for worse. If economic benefit is more important to Sinhala Buddhists than the dignity of self-governance – they would repeat the above manifestation again and again. They strongly weaken the self-governance power by damaging – knowingly or otherwise – the belief based manifestations of others remote from their power.

Often I am considered unpleasant by my juniors due to my commitment to ethnics which is invisible structure of the mind. They tend to think that I am taking the long and difficult route in an environment where they can ‘see’ easy benefits. Beyond a certain point, remaining in that environment costs me my self-dignity and therefore my membership with the Universal voting system. That is when I detach myself  but remain as an active observer based on my true investment in that environment. The benefits I earned but forewent due to detachment, become Natural Energy which helps me see deeper than those who rely on ‘benefits’ and/or hoard benefits. I believe this is why detachment and self-sacrifice is professed by many religions which lead us to meta-ethics more than secular systems do.

Most Tamils of Sri Lanka seek ‘detachment’ from majority rule. By separation they mean ‘detachment’. When we are punished for this – as relatives of separatists and terrorists – and we feel hurt – it invokes the Kandyan karma as the disturbance of the Silk Road heritage brought us the King-virus  pandemic.

The question before us – is - whether Buddha Sasana has evolved as Yuddha Sasana. (Yuddha = war) including through the disturbance to the Silk Road heritage by a country that is weak in current governance system of Democracy.