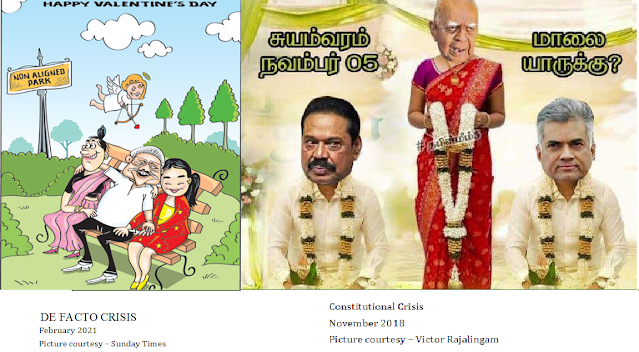 Law confirms one of more  positions in an official structure. Positions, are containers that facilitate the storage of the net values of our experiences in an environment.  In Sri Lanka, when we had the constitutional crisis in 2018, my position / container in the Sri Lankan structure was seriously threatened. I was in pain and then came the picture depicting Tamil National Alliance (TNA) leader Mr Sampanthan as the Independent bride who was wondering as to which leader to garland? The decision was made to garland UNP leader Mr Ranil Wickremesinghe. While many consider the defeat of  UNP in the Parliamentary elections as failure those who are true to themselves and Sri Lanka, would appreciate that the UNP-TNA partnership was strengthened during that crisis that that it strengthened the bonding between law abiding Sri Lankans of all origins. In governance, there are times when one needs to be still and let natural forces flow. This happened at the end of that term and hence the ‘free alliance’ picture is emerging.

The truth that this picture confirms is the effect of de facto interactions. Wikipedia presents De Facto as follows:

[In law and government, de facto ("in fact") describes practices that exist in reality, even though they are not officially recognized by laws. It is commonly used to refer to what happens in practice, in contrast with de jure ("by law"), which refers to things that happen according to law. ]

Since the British left Sri Lanka, attempts were made by Sinhala Political leaders to make laws not out of common practices, but out of desires and conveniences. Tamil Political leaders who were committed to law – opposed them through Due Processes – including non-violent protests and not absconding punishments by law enforcement officers. That way they continued to demonstrate respect for the law. But they were killed by the young and the restless who tried to present their desires and conveniences as law. This group was headed by the LTTE.

The Tamil community’s active leadership – including those who undertook the Pottuvil to Polikandy march and those who are using it to their advantage – has not eliminated the LTTE and its followers from the claim of ‘Genocide’ claim at UN level. Neither have they openly stated that the LTTE was part of the Genocide. To the extent LTTE is not placed on the same footing as the Government – the manifestations were NOT ‘facts’ that support Genocide claim. The core purpose was ‘military takeover’ by both sides.

The protest march is fake due to lack of Common Leader by Truth. Gandhi’s salt march was true under the leadership of Gandhi’s truth. Mr Suresh Premachandran who himself was a militant stated recently about the award of Energy generation projects to Chinese firms – that this is likely to result in a much larger group protesting against dominance of China in North. But to be of value, the leadership needs to be one that is committed to law and therefore accepts any punishment through the process of law. Those who followed the de facto path do not have that power except within their own circles.

One of my Tamil readers forwarded to me a video clip under the subject heading -  ‘A song we heard during war years’ . Even though I had heard the song I listened again. The original is from a Tamil film ‘Oomai Viligal’ / Silent Eyes. The first lines of the lyrics begin as follows:

We lost lives ; we lost belongings; but should we be losing our feelings? Is it right to lose the dream born out of our feelings?] – lyricist Aabavanan

The particular version that came to me was sung by Canadian Tamil of Jaffna origin. Every person who ‘feels’ the pain of loss of rights and other belongings would melt with the song. Like the 13th amendment effectively written by India, the above song is sung with feelings by Tamils of Jaffna origin who lost rights they thought they had.  But to sustain the escalation to global level, one needs a Gandhi – meaning one who respects the law and accepts the punishment through Due Process when one acts in breach of the law.

It would not work for those who ‘avoided’ the law. TNA demonstrated commitment to  lawful relationships. Not so the government led by Mr Sirisena followed by  Mr Gotabaya Rajapaksa. Only true belief based manifestations of facts would support a de facto relationship and that too only locally. Commitment to law – that has been inherited from other parts of the world would naturally be supported by the Energy of those who made those laws and also those who genuinely practice those laws.

The withdrawal from the UNHRC commitment brought the current government to de facto level. Where this is matched by Tamils and Muslims also at de facto level – true Sri Lankans need to deepen their commitment to common laws – so Dharma will be preserved for future generations that would seek to be driven by global values. Truth will preserve itself forever and it needs to be a stronger force than the law for it to support just governance. Right now neither side has it and to both it is largely a game.