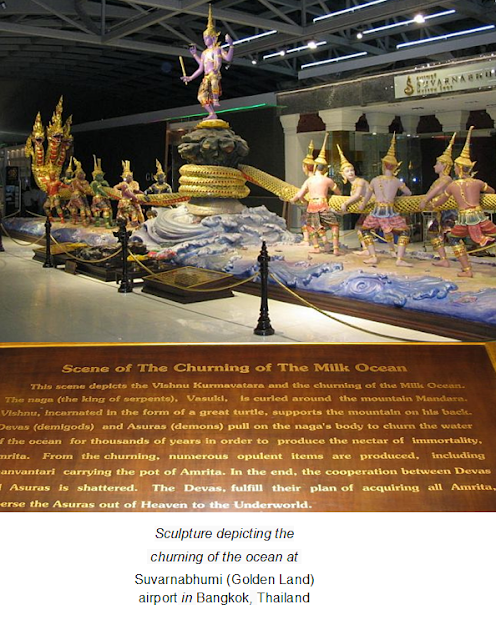 The above Sculpture is at Suvarnabhumi Airport in Bangkok. As per my understanding Suvarna means pure gold and Bhumi means Earth. The Legend is Hindu.

I have included how I applied this to my own experiences at the University of NSW in chapter 10 ‘Naan Australian’:

[In the above legend – the rod used to churn the ocean  is Mount Mandara. It is reported that this  mountain in India, is composed of fragmented stones but the whole is one single structure. To me, it symbolizes  many memories in One intellectual structure developed from Truth. Hearsay and mere knowledge would give us many structures requiring us to consciously switch from one to the other. That is the outcome through assimilation. Closures by completing the experiences are necessary for consolidated thinking.

The mountain  personifies  Puthi / Intellect.  In the churning process it has to turn one way first and the other way next to surface the whole Truth. In the legend,  the rod is placed on the back of a Turtle and the Turtle is said to be Lord Vishnu on earth. To me that meant that the Puthi/Intellect needed to have Truth as its base.  ]

[Theravada Buddhism is the official religion of Thailand. 94.6 percent are estimated to be Buddhist; 4.3 percent Muslim; 1 percent Christian; and 0.1 percent other or have no religion. ]

The parallel for Sri Lanka is presented as follows:

The above sculpture confirms Hindu influence. This means that it is part of the Indigenous powers of Thailand – especially in terms of economic wealth. The parallel in Sri Lanka’s airport  is Buddha who renounced economic wealth to attain Heavenly Bliss.

When we ‘cling’ to old forms we confirm ignorance of the philosophy of rebirth.  According to this philosophy, we leave behind all material wealth at the time of death of this body and take with us only the truth – the pure truth. That to my mind is the philosophy of Swarnabhoomi also.

·       Evolutionary Path – to recognize the laws & rules of the society

·       Legislative Path – over reliance on the legislative path which is a foreign path.

In terms of Land ownership, the first category is belief based and is covered by Prescription Ordinance 1872

Likewise laws. Recently, I highlighted the claim by Tamil MP Sumanthiran as follows:

[The TNA lawmaker said that Parliament has to take steps to enact a law. “English Law is supposed to be the substantive law because we don’t have statute law now. In English law itself, scandalising the court is no longer an offence of contempt of court. There is a serious lacuna in the law with regards to a statute for contempt of court that has resulted in this unprecedented injustice to an honest Member of Parliament,” he said.]

Given that the Judiciary has been practicing English law, those law makers would become believers .

[The British Introduced Prevention of Encroachments upon Crown Lands Ordinance No 12 of 1840. This Ordinance declared all lands under Govt if people could not prove their ownership. This was purposely done as the Sinhale populace was living on lands passed down from generation to generation. There was no document of ownership like deeds, grants that the British demanded. Thus, the Sinhale populace was legislatively robbed of their land ownership by an invading country. This eventually resulted in the Kandyan Rebellion of 1848

…. The title registration by colonial British (known as Torrens Law and Bim Saviya in Sri Lanka) began in 1866 and 1897. The real intent was to deny land rights to those who did not have ‘deeds’ just as was done by the British with the Waste Lands Ordinance..]

The Common source to Prevention of Encroachments upon Crown Lands Ordinance and Torrens Law from Australia is the British mind.

But the British also codified ownership through the Evolutionary path which is confirmed by Prescription Ordinance 1872.

If not for that codification, the customary practices in today’s form  would be applied as law through majority force. The language in Sri Lankan Appeal Courts continues to be English for this reason.

The rejection of MCC by the likes of Ms Waduge is presented as follows:

[Question: How is Sri Lanka’s land and resource being ‘grabbed’?

MCC says it is ‘gifting’ Sri Lanka $480m but in exchange Sri Lanka has to hand over its land registries to the US officials. They will then have access to our land registries. Moreover, the MCC agreement grants them immunity. Whatever MCC and its officials do in Sri Lanka will be immune from law.]

Likewise, whatever Buddhist President does in Non-Buddhist areas.   If there is no structure through belief and/or conscious learning one tends to be influenced by her/his own culture. This is confirmed by the way Buddhist leadership in Sri Lanka have enforced Sinhala culture as Buddhist culture. Often when there is no measure / law one is able to get away with the majority that is apparent – especially with outsiders.

MCC assignment would have gone towards One Rule for all – including for Buddhists. So long as the Prescription Ordinance 1872 is still valid – the true ownership would be protected. When we believe, it is taken as being eternal.  In our Land matter, his honour Justice N. Bandula Karunarathna  shared his reasoning as follows:

[It is important to note that the 1st Defendant claimed that, he achieved to retain possession, despite efforts by two persons to oust him in 1987 and 1988 period. One person was OIC Narahenpita Police station, Inspector Fabian Mitchell and the other one was named Periyasamy. It is interesting to note that Defendant Piyadasa declared ownership by Prescriptive title on 04.05.1988 by Deed of Declaration bearing number 334 attested by A.H.T. Dayananda N.P. The plan included in this deed was the Partition Plan No. 2332 in the previous Partition case 12462/P of 1971, drawn by S.R. Yapa Licensed Surveyor. It reflects that Piyadasa was having knowledge about the Partition action. …..

The court further observes that, after Piyadasa was threatened by those 2 persons in 1988/1989, he has given evidence to say that he was not living in that disputed land as his life was in danger. This also confirms that he was not having uninterrupted possession on the land in question.

Thereafter Piyadasa filed an action 5812/ZL, against those 2 persons, namely Fabian Mitchell and Periyasamy in the D.C. Cololmbo. This case went ex-parte against both of them and Piyadasa had used this ex-parte Judgment to confirm his Prescriptive title for the next transaction. Periyasamy's address is given as No. 163/7, Nawala Road, Narahenpita which is the address of the same disputed property in the present action. If Periyasamy was residing in that same property, then Piyadasa would have definitely been residing in some other place. Appeal brief confirms that, Piyadasa has used his residential address as No.28, Nawala Road, Colombo 5, for the DC case No. 5812/ZL. This clearly proves that even at that time he was not living on the disputed land.]

The discovery that Mr Piyadasa was lying was known to me through the ‘fact’ that the land was unoccupied when I purchased it and later when I visited the land. It was this interest that gave me the judgment that Mr Piyadasa was trespassing / stealing my land. But I had no documentary evidence to confirm this – for the simple reason I did not expect trespass.

If not for the Prescription Ordinance codified by the British, I would have had no pathway through which to believe that the Land would come back to me despite it having changed hands three times. But because I believed in the law, I found the evidence. The Judges upheld my ownership as per the evidence provided by Mr Piyadasa. If I had not believed – but rather gave up - I would not have found the evidence that Mr Piyadasa himself provided when he thought he was ‘free’ of supervision.

All this is important in terms of UNHRC issues which are also needed to be belief based. If the Tamil Diaspora leaves out LTTE’s role in the war and finds fault with the government – it is not balanced by law but by their own desire to ‘win’. They ‘takeover’ the Tamil side and hide it. Then it is one sided and is political and not governance.

As per the system of Truth – this will empower those elected by the participants and no more. In the meantime, the real needs of the folks in Sri Lanka remain unaddressed – including by those who desire the easy way.

As stated above in relation to the legend,  the Hindu way says ‘In the churning process it has to turn one way first and the other way next to surface the whole Truth.’

Right now Tamils are turning their intellect only in one direction due to lack of belief in our ancestry.