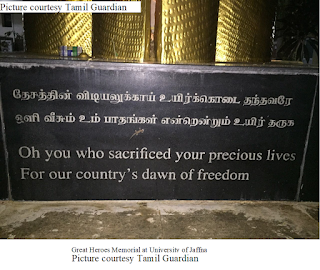 [Sri Lanka's health minister, who publicly endorsed sorcery and magic potions to stop surging coronavirus infections in the island, has tested positive to COVID-19. She and her close contacts will self-isolate, officials said on Saturday.

Pavithra Wanniarachchi had publicly consumed and endorsed a magic potion, later revealed to contain honey and nutmeg, manufactured by a sorcerer who claimed it worked as a life-long inoculation against the virus.

She also poured a pot of "blessed" water into a river in November after a self-styled god-man told her that it would end the pandemic.

The island nation of 21 million on Friday approved the emergency use of the Oxford-AstraZeneca vaccine only hours after Ms Wanniarachchi tested positive, officials said.]

Majority migrants from Sri Lanka to Australia are taken to be less than the White Australian in high status. If s/he were ‘made’ in America – it is even better. But eventually Truth always emerges as the Eternal Leader.

Practice of Chinese Acupuncture treatment is permitted in Australia. To my mind, it is based largely on belief. To one without belief it would seem like show of ‘magic’. When government attributes to Indigenous powers over land, that would also seem like ‘magic’ to those without belief.  Those to whom the land is sacred would take it as natural. That which is natural is exponential in its power. Those who rely more on the intellectual pathway to ownership would need to have higher mind structure through which both sides are present in the brain at the same time. Hence the eyes of Lady Justice are covered. The physical eye that is distracted by the seen would tend to include that in the  decision making. The Balance carried by Lady Justice balance confirms that the decision would be in favour of the side that manifests greater facts.

The democratic version of the above balance is the two sides – equal and opposite. The requirement is that both need to be Belief based. In the article ‘SWARNABHOOMI & ETHNIC WAR’ I highlight this as follows:

[The mountain  personifies  Puthi / Intellect.  In the churning process it has to turn one way first and the other way next to surface the whole Truth. In the legend,  the rod is placed on the back of a Turtle and the Turtle is said to be Lord Vishnu on earth. To me that meant that the Puthi/Intellect needed to have Truth as its base.  ]

Belief being exponential in power, one needs to become one side first and the other side next. In this instance the intellect needs to be blind at the beginning (zero base)  – so the mind registers one side’s manifestation first and the other side’s manifestation next. A Parliament that is driven by belief would be sovereign and self-governing. While making laws it should not ‘see’ rights and wrongs. Once a law is passed through majority vote, one needs the law that has successfully been elected – as the right law. In applying this one needs to be like the Judiciary.

Likewise,  rules and laws during war time.  Tamils can declare theirs and Sinhalese theirs. Neither has the authority to judge the other. Minorities have to so declare and ‘wait’ until Majority learn they were wrong. This happened in 1977 and later in 2015. In both instances the Universal Power of Belief worked to uphold Sri Lanka’s Sovereignty and therefore ‘Commonness’ at root level.

As per Sunday Times report :

[On Friday, the Government announced one of its countermeasures in the wake of the UNHRC sessions in Geneva. A gazette notification issued by President Gotabaya Rajapaksa said a three-member Commission of Inquiry has been appointed to “investigate and inquire” into the following matters:

(d) Overseeing of whether action is being taken according to (b) and (c) above.]

The then President has since been quoted as confirming that they had to use their own belief based pathway. This is acceptable to the extent Vaddukoddai Resolution 1976 was accepted as the belief of Tamils.

At UN level, the system is democratic and not judicial in structure.  To the extent Tamil Diaspora ‘lobby’ for votes at that level – they would dilute the power of belief. They would also not value India’s vote which is based strongly on its own investment in common culture with Sri Lanka more through Hinduism than through Buddhism.

As per the National Peace Council of Sri Lanka about the demolition of war memorial at the University of Jaffna:

[The monument that was destroyed by the university authorities was the only public monument to those Tamil civilians who perished in the last stages of the war.  The damage that has been done needs to be repaired as soon as possible without permitting the politicization of the issue.  In the absence of pro-active and constructive actions those with partisan motivations are likely to take the on positions of contestation that exacerbate wounds rather than heal them.  There is a need to rebuild the monument, sooner rather than later, and in a manner that heals rather than further inflames the hearts and minds of people.]

Here, the measure used is ‘condescending’ and false. The claimants of Tamil Nation, would identify with the following by Wikipedia:

The memorial for victims, at the University of Jaffna happened in 2019. But they already had in 2017 – the war memorial  with the following message ‘Oh you who sacrificed your precious lives For our country’s dawn of Freedom’.

Country meant Tamil Eelam and not Sri Lanka. This declaration is in breach of the 6th Amendment to the Sri Lankan Constitution according to which :

[157A. (1) No person shall, directly or indirectly, in or outside Sri Lanka, support, espouse, promote, finance, encourage or advocate the establishment of a separate State within the territory of Sri Lanka.

(2) No political party or other association or organisation shall have as one of its aims or objects the establishment of a separate State within the territory of Sri Lanka.]

When we oppose laws that we consider to be unjust – we have the duty to accept the punishment that the Judiciary hands down. When we so accept on the basis of the law, it becomes disciplinary action . One who accepts it on behalf of the group s/he represents – does so on behalf of all of them. This makes all of them lawful to the extent they accept the person as their leader.

Where the law itself is just but the judiciary rules without belief in the law and/or fact produced by one side, the matter gets carried to the Natural Powers of the environment that awarded the power to the Judiciary which is the constitution made by the Parliament and therefore the People. It bypasses the routes that genuinely made the mistake or punishes the wrongdoers who neglected the duty for whatever reason.

The leaders of Tamil Political parties who are actively taking the ethnic issue to the UN are lawyers. Of them – Mr Wigneswaran is a former judge. But none of them educated the students of the University of Jaffna that the installation was unlawful and in breach of the Constitution on which they take oaths. Neither have they ‘included’ those students as part of themselves and led the protest and taken on the punishment on their behalf.

The first lesson in education is to respect the guru. One who takes votes in return for favours – for example to turn a blind eye to breaches of the law – is not respectable. If Tamils table at UNHRC session,  their conclusions as per Sri Lankan law – they would have earned the respect of the law abiding Sri Lankan and also the UN.

Otherwise, the UN would ‘judge’ Sri Lanka as the Australian judged the Minister for Health who took the political pathway at her level. Given that she did not have intellectually acquired knowledge in Western Medicine, the lady ought to have taken the home-medicine privately in her home environment. Otherwise it amounts to abuse of power to brainwash the People who are desperate. But the winner is the Scientific doctor whose power brought the  ‘Oxford-AstraZeneca vaccine’ . This power includes the mind of the doctor/scientist who continues to pay her/his respects to that common system – even though s/he may live far away from Sri Lanka – in terms of current place and past time.

By reacting to Sinhalese Politicians – Tamils have lost their own inheritance killed by armed rebels who are now celebrated as ‘heroes’. By failing to respect the Politicians who fought non-violently, Armed Rebels ‘stole’ their status. Those who follow them as heroes – effectively condemn themselves to being ‘traitors’ and hence become intellectually bankrupt.