The poor use belief instead of science to solve their problems. This is true of many areas in Northern Province of Sri Lanka. The Economy Next article ‘And Then She Got Covid’ reveals:

[Minister, Pavithra Wanniarachchi, and her colleague the State Minister for Women’s and Children’s Affairs Piyal Nishantha de Silva who consumed the concoction for the cameras have tested positive for Covid 19 and are under treatment.

Wanniarachchi was found positive from an Antigen test and a subsequent PCR test confirmed the diagnosis, her Media Secretary Viraj Abyesinghe told EconomyNext.

This government which successfully practices the art of governance by distraction promoted the potion produced by a medically untrained Shaman of the Goddess Kali, “guaranteed” to protect us from Covid 19, even as the second wave engulfed the country.]

Ground Views in ‘A Tribute to Malathi de Alwis and Her Work’ reveals:

[Malathi analyzes the figure of Viharamaha Devi, the mother of Dutugemunu as the epitome of feminine sacrifice and patriotism in Sinhala Buddhist nationalism, which we are all now expected to emulate. She describes how nationalist ideology and rhetoric has been able to construct Viharamaha Devi as a woman without blemish; who never forgot her place as a woman but was skilled in military tactics and governance; who nurtured her young son to be a true patriot and nationalist and encouraged him to wage war against the Tamil king, Elara, even when his father had forbidden him to do so. Malathi shows how nationalist ideology frames Viharamahadevi as being “moral” and “right” even when she called for violence, even when she supported and encouraged the call to arms for the protection of the Sinhala race, the Buddhist religion and motherland. Indeed, she is considered as having placed the needs of her country above her own, knowing her rightful place, and content to take pride in her son’s achievements. She is considered to encapsulate the vulnerability of the Sinhala nation and its people’s determination to retain what was perceived to be rightly theirs (a unified country dominated by the Sinhalese). The appropriation of Viharamahadevi by Sinhala Nationalists, Malathi argues, enabled the production of a particular kind of Sinhala womanhood – nurturing, sacrificial and patriotic – that is always already imbricated in Sinhala “history,” “culture” and “tradition.”

The current President has invoked not the powers of Parliament but the power of King Dutugemunu who defeated Tamil King Ellalan from South India. Let us try and work out how the powers of our respective heritages worked:

In yesterday’s article ‘STEALING HERITAGE?’ I highlighted that according to Canadian Tamil Flag – the roots of Tamils ‘are being nourished by the three symbols of the three ancient Tamil dynasties: Cholas, Pandya’s, and Cheras’.  The significance of Chola Flag is highlighted as follows:

[On the coins of Uttama Chola, the Chola Tiger was shown sitting between the twin fish of Pandya and the bow of Chera. The flag of Chola is mentioned in Periya Puranam, which was compiled during the 12th century by Sekkizhar] 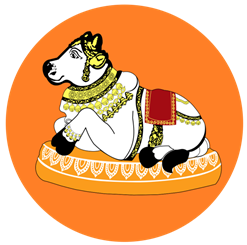 The LTTE chose the static version of  ruler’s flag . They would therefore invoke Dutugemunu’s heirs – to have continuous fights.

The logo of the University of Jaffna is Lord Nanthi. The first line of the first verse is:

The Maveerar / Great Heroes’ memorial at the University of Jaffna therefore invokes the relative ruling power of the army and not the exponential governing power of Truth through academic research and teaching.

The destruction of the war memorial on 08 January could be taken to be the power of the Consolidated Academic Mind of the University clearing the pathway of relativity, to make way for  Absolute power  of Truth.

So, did Goddess  Kali curse the Health Minister?

As part of the Government, Ms Pavithra Wanniarachchi has the duty to uphold  Buddha Sasana. Goddess Kali is Hindu Goddess. If a Hindu Opposition therefore invoked Mother Kali then the opposition part of  article 9 of the Constitution – articles 10 & 14 (1) (e )would get invoked :

10. Every person is entitled to freedom of thought, conscience and religion, including the freedom to have or to adopt a religion or belief of his choice.

14. (1) Every citizen is entitled to – (e) the freedom, either by himself or in association with others, and either in public or in private, to manifest his religion or belief in worship, observance, practice and teaching;

If therefore the discoverer of the native vaccination against Covid19, had declared himself to be a Hindu – the vaccine would have had the exponential powers to fight against the enemy of exponential power. The work that goes into development of a vaccine is stored as Energy in that vaccine. If Ms  Ms Pavithra Wanniarachchi sought Native medication, she needed to find a believer in Buddhist .

Goddess Kannaki is also Hindu goddess. The work of  Dr Malathi de Alwis is therefore relative and lacks the exponential power of belief. I also pray to Goddess Kannaki. Such prayer would go directly to heal the pain of good wives whose husbands have been unjustly punished – including by the Tamil armed groups. This morning I shared as follows with a fellow Hindu:

[It is so very sad that our community killed Rajiv Gandhi. What is worse – ‘asingam’ is that we pretend that it did not happen. ]

As per my insight – those of us who genuinely care have invoked the Regional power of independence – including through Gandhi power. Whenever those who are globally independent get feel and identify with the victims – those in our traditional home areas get empowered to live independently in their home areas. This is direct and immediate sharing. The relative power by Tamils as well as Sinhalese, through foreign governments is relative. The more the visible outcomes the stronger the relative power that a ruler needs. This is as in Einstein’s E = mc2