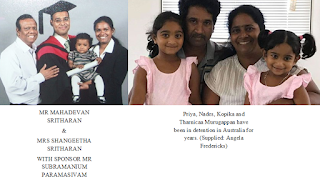 Recently, I concluded my contribution to ‘Planning Australia’s Humanitarian Program 2021-22’ as follows:

‘It is therefore strongly suggested that humanitarian programs in immigration be based firmly on Community based integration with wider Australian Society .’

When we sponsor on family basis – that base needs to be true throughout the life of a migrant. One who sponsored is the first government of that migrant. The family of Mr Sritharan Mahadevan is an outstanding example of ingratitude which would have naturally affected the opportunities available to other would-be migrants who come later on community based issue. To my mind, the ingratitude of the likes of Sritharan Mahadevan’s family also contributed to the long period of suffering by the Murugappan family.

As per my discovery – we need to earn the status from zero base through our own performance and/or by respecting seniors in that group. We were the seniors of Sritharan Mahadevan. But gradually, like militants they broke away from our structures and formed their own group which was more an association than one based on common principles. This got worse when my husband’s elder brother passed away and we were informed by Sritharan Mahadevan’s parents that there was will. Together with Mrs Saraswathi Sabanathan and her son Yohananda they tried to take the whole of the estate of Mr Subramaniam Yoganathan. They claimed that the two sisters did not receive dowry but were given ‘donation’. They made also claims that I was not part of the family because this was my second marriage and that our children were not my husband’s heirs because they were not biologically his children. The Jaffna courts awarded equal share. But in reality  they took leading position and got the monies from Barclays Wealth  - Isle of Man. A cheque was sent to my husband but without details. Our requests for details have been ignored.

During this process, I brought legal action against those concerned for defaming my marriage and therefore myself. I was dismissed on the basis of ‘lack of jurisdiction’. As my opposition – their team applied to ban me as a vexatious litigant. When it was my turn to have my say in court – all I said was ‘if I am banned on the basis of these defendants’ application – I would go back to Sri Lanka.’ The judge dismissed their application – confirming that I was heard through my demonstrated respect for law.

This illustrates also – how cheap things are no good. We must all pay the due price as per our conscience. Communities that claim that  governments have committed war-crimes, lose the right to become citizens through the process of law. One who seeks to punish through one’s truth – needs to stay and declare at that place. One who seeks to run away loses that right. Can’t have it both ways. Likewise, those who are sponsored by family have to treat that family as first government in the new nation. That is the way Truth works. That is how we as citizens also contribute to Australia’s sovereignty. Everyone who so contributes as a say.