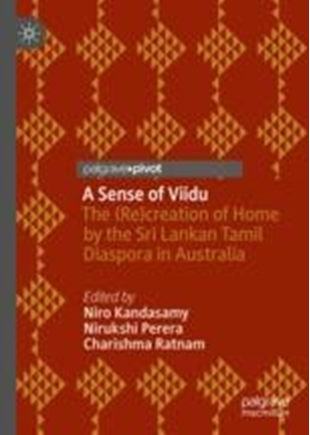 I was directed by a fellow member of the Australian Tamil Community of Sri Lankan origin, to SBS article headed ‘Why do Tamil asylum seekers need protection - and why does the Australian government say they don't?’ The author is Niri Kandasamy who co-owns the  book ‘A Sense of Viidu’ – presented as follows:

[This book is the first compilation of the experiences of the Sri Lankan Tamil diaspora in Australia. It explores the theme of home—from what is left behind to what is brought or (re)created in a new space—and all the complex processes that ensue as a result of leaving a land defined by conflict. The context of the book is unique since it focuses on the ten-year period since the Sri Lankan civil war ended in 2009.]

The author is presented as follows:

[Niro Kandasamy completed her doctorate at the School of Historical and Philosophical Studies, University of Melbourne, Australia. Her dissertation examines the role of memory in the life stories of young Sri Lankan Tamil people resettled in Australia in the 1980s and 1990s. She also undertakes research on the experiences of women with a disability in post-armed conflict Sri Lanka. She was a student visiting fellow at the Refugee Studies Centre, University of Oxford in 2018. She has published work in Ethnic and Racial Studies (2018), Immigrants and Minorities (2018), Australian Social Work (2017) and Medicine, Conflict and Survival (2017)

Yesterday I wrote as follows about the Sri Lankan quota system:

[Recently Tamil Diaspora leader Mr Rajan Vinasithamby discussed the shortage of entrants to Universities, including on quota basis, from Northern Sri Lanka. https://youtu.be/1g_FjczZf-g. Mr Rajan Vinasithamby suggested many improvements – based on his UK experience. This is the parallel of the reasoning by the ‘Lawyer’ in the above immigration matter. The lawyer was measuring through answers to questions by Australian mind. The interpretation would be based on the lawyer’s own measure to ‘win’ and this need not necessarily be the truth as per Asylum-seeker laws.]

Ms Kandasamy has been educated in Australia and her mind structure is shaped by Australians. The true response to her question requires her to think like an Eelam Tamil and/or as Sri Lankan to have the experience and then apply the global laws  relating to Asylum. An Australian Government has the requirement to think in the global context to have the eligibility to be a service provider to war victims. The government has the duty to assess as per their current conduct on Australian soil. The case of Murugappan family has become a political football due also to those who protest without having had the experience.

Politics without belief is destined to damage Australia’s sovereignty. Belief is natural governance power. Hence elected politicians have the power to make laws. They are true laws only to the extent that politician believes in her/his electorate and therefore its sovereignty.

The quota system to University education, is the parallel of elections in democracy. Eligibility is determined by the way we USE our investment in education. If we use it only to promote our self-interests – then we become indebted to the ‘Common pool’ of resources (including intelligence) from which we drew to get our credentials. Both Tamil only as well as Sinhalese only communities are indebted to the common Sri Lankan community to the extent they use/d common Sri Lankan resources. Topping the list of resources is Intelligence. The Sri Lankan constitution’s fundamental rights section confirms this common intelligence. Every Sri Lankan who fought on the basis of that constitution is a common Sri Lankan. Those who take oaths to uphold that constitution have the duty to expressly set aside separatism. That is when the constitution will support them.

As per her own published work – Ms Niro Kandasamy is limited to the quota of her own circle of belief. The young lady recognises victims of war as her home-circle. But here in Australia, her educational titles allow her recognition through mainstream media. There was no support for me from within the Tamil community or the Sri Lankan community at that level. I was believed by my immediate circle who are largely educated Tamils. Most of them were / are silent on the Sri Lankan ethnic issue. Many members of our family who were sponsored by us – Common Australians of Sri Lankan origin – followed the sensational pathway of Eelam Tamils. Hence their quota to enter the University of Life is limited to Eelam Tamils and their descendants.

The true quota system  is as per our investment in a sovereign group. To the extent the Tamil community is divided as Sri Lankan Tamils & Eelam Tamils – the natural eligibility also would be divided as per that body. Those who supported armed war by a group that disrupted the education of our youth – get lesser allocation as per their truth than those who inherited the intellectual pathway to self-governance. By treating the descendants of that separated community – without expressly drawing the borders as per truth in the conscience of that community Ms Niro Kandasamy is confirming that her inheritance in education is limited to that group’s entitlement. The young lady may get the certificates but the Energy to work the global system would not support her. The young lady needs to learn from the achievement of ‘Pakiyarajah Darukeesan’ of Jaffna Hindu College who topped the 2014 GCE A/L examination and became Island first in the Maths Stream. To me that achievement was due to his humility in attributing to his elders in education. The mind structures of the likes of former chief justices of Sri Lanka – Deshamaya Suppiah Sharvananda, Justice Kanagasabapathy J. Sripavan Justice  Herbert Dharmarajah Thambiah would naturally support those from that area who respect them as elders. Where they are minorities by numbers merit based allocation of opportunities also would be in the minority. If the likes of Ms Niro Kandasamy take high positions – the community that follows them would not have enough positions for educated leaders. They would naturally get promoted to self-governing positions in the system of truth, followed by global intelligence though the system of democracy. All this needs to be balanced before we indiscriminately recruit war victims.

A global leader needs to apply theory on Equal footing or base it on her/his need as per the position.