To my mind, our entitlements are as per our own contributions to that system. As Canadians Canadian Tamils earn certain rights through their lawful conduct. Likewise, as Sri Lankans, Sri Lankan Tamils have earned rights. What happens when Sri Lankan Tamil converts to Canadian Tamil? To the extent the respective Governments committed themselves, by being parties to various covenants , citizens earn credit points with the system, through their conduct.

My article of 14 November 2020, under the heading ‘Indo-Lankan Award – Protection of Universal Franchise’ was well received by Tamils of the above category. In relation to agreements I wrote as follows in that article,:

[The Indo-Sri Lanka Accord was between the two governments. LTTE was NOT a party to it. Mr Ahangama referred to them as Terrorists. If indeed – he believed that to be the case, then there is no logic to his expectations that the terms of the Accord were not satisfied by the LTTE. In addition Mr Ahangama stated that Article 157 was binding only if the agreement was for economic purposes. … JVP killings of successful Tamil Businessmen and their businesses was a core reason for the Accord and this therefore is covered by Article 157.]

"In a vindicatory action the claimant needs merely prove two facts; namely, that he is the

ownership is in the possession of the defendant. Basing his claim on his ownership, which

entitles him to possession, he may sue for the ejectment of any person in possession of it

without his consent. Hence, when the legal title to the premises is admitted or proved to be in

the plaintiff, the burden of proof is on the defendant to show that he is having lawful

Interestingly as per the judgment:

The above case confirms how Jaffna Tamil and Indian Tamil would join forces for Business purposes but when it came to ‘ownership’ Jaffna Tamil was distinctly different to Indian Tamil.  This heritage would be built into the psyche of Diaspora Tamils as well as current Jaffna Tamils. They will come together for UN Business / Politics but not when it comes to ownership issues.

The above confirmed to me yet again the high regard in which Tamils were held by their parallels in their respective fields of expertise. As per Wikipedia:

[As a lawyer Sharvanda worked on civil cases and served under such eminent lawyers as Dr. H. W. Thambiah QC, S. J. V. Chelvanayakam QC, and H. V. Perera QC. He was appointed as a judge of the Supreme Court of Sri Lanka in 1974. In 1984 he succeeded Neville Samarakoon as Chief Justice, the first Tamil to hold that position. He made a number of landmark judgments during his Supreme Court tenure, including the 13th Amendment to the constitution. He retired from the Supreme Court in 1988.]

The secret is in his completion of local life:

[Sharvanda was born on 22 February 1923 in Kayts, Jaffna District. He attended St. Anthony's English School in Kayts before transferring to Jaffna Hindu College at Grade 6. After completing his secondary education he studied at Colombo Law College, qualifying as a lawyer in 1946. During his time at the Law College he also obtained a BA degree from the University of London.]

The above confirms systematic completion of primary life in the local environment in which he was born. This then promoted him to the next higher or wider level. Those who take him into themselves would refrain from using his status as if it were a political produce. When more of us bring such ancestors into ourselves – we are already One Nation. This has been confirmed again by the judiciary in my land matter.  As per that insight I am different to those who seek Remedial Justice on behalf of someone without proxy.

Canadians have already been compensated in Canada, including through their admissions as Canadians. If one double dips – one confirms stealing from the victims.

For his turn, if Mr Wigneswaran had genuinely respected his elders – he would have supported Tamils whose lands are being occupied to take action in Court. When the mind of our elders is repeatedly taken – Remedy would happen one way or the other. That is the law of Belief.

The news received by me today, included the following: 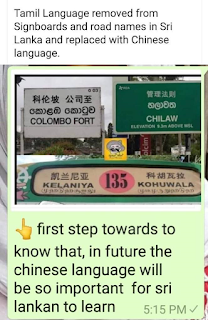 In time to come Chinese parallels of Indian Tamils is possible in Sri Lanka and therefore Sea Street’s parallel is likely to happen in Hambantota as Shangrila Street. But it is highly unlikely that either would produce  Chief Justices – like Jaffna did – not one but three of them. Let us not throw that baby out with the dirty political bathwater .