Truth is eternal and therefore one is entitled to conclude that true belief is eternal. But how does one know whether one is a true believer or not?
Yoga Joseph sent the following message:
[Easter centers around the Christian story of the Crucifixion of Jesus Christ the earthly Son of God & his resurrection on the third day typically played out in a pageant of services & processions & alms & in all cases for all the Easter Sunday services.]

Today I received also an email from Jetwing Hotels with the following message: 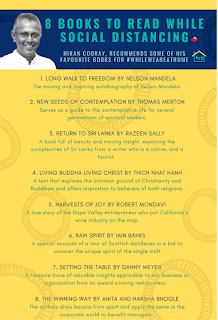 [These days, we could all use new ways to fill up the long hours continuously spent in our homes.To many of us, reading has always been a welcome respite and a great way to broaden our horizons.Here are a list of books recommended by Hiran Cooray that we could add to our reading lists to occupy our time]

During my first stay at Jetwing Jaffna, I read the book about the founder – Hiran’s father the Late Herbert Cooray. That was the bible of Jetwing. As per that book, Herbert was an avid reader and a champion of the underdog. To be a writer, I needed to be a good reader first. I am led by my intuition in reading. Given that Jetwing Jaffna is on Mahatma Gandhi road, I conclude that the spirit of Independence awoke my intuition to read the Jetwing bible. None of the books listed above appealed to me.

Instead I would read my own work and choose the following as a manifestation of the Easter spirit:
My Easter experience:

[I went to Melbourne soon after the judgment was delivered.  It was Easter weekend and I asked our son Pradeep to take me to church on Good Friday.  I usually try and go to church on Good Friday. We went to the church of the school that our granddaughter was then studying at – Our Lady Help of Christians School.  The nun there who was  replacing the regular person – asked our son Pradeep to carry the Cross when the congregation followed The Way of the Cross. To me that was message from Jesus – saying He understood my pain. I completed that experience to a large degree due to my faith in Jesus.  To me it was not coincidental that Pradeep was asked to carry the Cross.  It was confirmation of blessing that I was also carrying the cross and that Tamberline was part of the reasons why I was carrying my cross. Jesus has shown us that we do not carry the Crosses in vain – that there is Bliss when we do so on behalf of all of us.] Naan Australian – chapter 14 headed ‘Justice Tamberline’s Handout.

The Cross above also symbolizes my faith in Jesus and therefore I do not need proof about Resurrection. Belief without proof is confirmation of truth. To my mind that is the core purpose of an Affidavit. I upheld my true Belief and share with others in need.
Justice Tamberline heard my complaint against the Administration of the University of NSW. Following is an account of how my investment in law and due processes of court were crucified by Justice Tamberline:

“Mr. James Matson (of Bartier Perry) – the lawyer who came to Court to represent the University is relatively young.  During the preliminary processes – he demonstrated lack of commitment to Judicial Administration. At the preliminary hearing under Justice Tamberlin (the Judge who ruled in favor of David Hicks who was charged with Terrorism by the USA), Matson demonstrated many weaknesses in Administration. In their Notice of Motion dated 22 March 2007, these lawyers asked as follows:
2. Pursuant to order 20(2)(1)(a), (b) and/or (c ) of the Federal Court Rules or pursuant to the Court’s implied incidental power, the proceedings be dismissed
I highlighted  in my submission that Order 20 applied only to proceedings commenced before 01 December 2005 and that my application to the Federal Court had been made on 07 December 2006.  Mr. Matson subsequently withdrew that part of his Motion but without attributing that credit to me in that Court.

I learnt that these lawyers gave Affidavit evidence on behalf of their clients.  There was no Affidavit evidence or other objectively verifiable evidence from the University  Administration. Hence it was a case of  me – Gaja Lakshmi Paramasivam vs  Bartier Perry – the lawyers. It was NOT Gaja Lakshmi Paramasivam vs the University of New South Wales – which is the documented case as per Court papers.

I cross examined Matson as follows :

MRS PARAMASIVAM: Mr. Matson, you just stated in Court that you were crossing out some of the sections of the order that you wanted, in the notice of motion

HIS HONOUR: Yes. Please could you speak slowly, I think, and fairly loudly. There is a microphone there. If you can direct that to your -----

MRS PARAMASIVAM: Yes.            You said this morning that you wanted some parts of item number 2 in the notice of motion crossed out?

MRS PARAMASIVAM:  Was it after you received my affidavit dated 29 March, specifically paragraph 5, in which I have stated that order 20 did not apply

MRS PARAMASIVAM:  O.K.. Thank you . First of all I think I would like to get some agreement on some of the terms that we might be using. So I would like to know whether you disagree with any of my definitions of common terminology not spelt out in the legislations used. I would provide my definition as per my discovery and I would like you to confirm or deny, to provide your own definition. Is that o.k. with you?

MRS PARAMASIVAM:  O.K.      Do you agree with my definition of “fact” – that fact is Truth bound by the environmental limits in which it is born?

HIS HONOUR:   I’m sorry, I don’t understand.  Sorry would you ask your question please?

MRS PARAMASIVAM:  I’m just trying to define the terminology that I will be using later on.

HIS HONOUR:   Well, just ask one, just ask a question. I reject that question

MRS PARAMASIVAM:  Alright. I refer to paragraph 3.1 of your affidavit dated 22 March 2007. Would you confirm to this Court that this fact was already provided by me in my annexure A,  attached to my affidavit dated 7 December 2006?

HIS HONOUR:   (To Matson) Do you have a copy of the affidavit?

HIS HONOUR:   Yes alright. Let the witness pick up a copy of the affidavit.

MRS PARAMASIVAM: Statement in 3.1 – is it already covered in my affidavit dated 7 December 2006?

HIS HONOUR:   I reject that question. You’re asking him about paragraph 3.1 of his affidavit. Is that right?

HIS HONOUR:   That you were employed as a senior accountant in the faculty on 5 January.

HIS HONOUR: What is your question?

MRS PARAMASIVAM:  My question is that I have already provided ------

HIS HONOUR:  That is not a question. That’s a statement. What is your question?

MRS PARAMASIVAM:  Sorry. The question is whether it is already covered by my own affidavit.

HIS HONOUR:  Well, what does it matter? Were you employed on 5 January or not?

MRS PARAMASIVAM:  Yes, I was.

HIS HONOUR:  Well, why do you want to ask him questions about it?

MRS PARAMASIVAM:  Because I feel that the Respondent was selecting only some of the facts relevant to the matter.

HIS HONOUR:   Well, I reject the question if there is no dispute.

From then on  Mr. Tamberline the individual became my opposition – taking the vacant place of the Vice Chancellor of the University of New South Wales.  Unless each one of us occupies our lawful position – we cannot be addressed by our position titles but merely our names as individuals.  ]

The use of Affidavits is essential in a subjective system and/or in cases where direct objectively verifiable evidence does not happen in the pathway of manifestation. More important is the need for that manifestation to contain expressions of belief. The claim by Jesus that he was son of God is such an Affidavit evidence.

The above process in Court reveals that lawyers who were NOT part of the manifestation of ‘fact’ that they included in the process through the Affidavit, were hijacking my right to share my facts independently in that court. No lawyer has the right to escalate any fact that the opposition produced. They often do so when their clients avoid Court Process. But Jesus comforted me through the honor of our son carrying  the Cross. That was no coincidence but an internal confirmation of belief.

Manifestations are rarely caused by one source alone. The effects confirm that Coronavirus was caused by globally active persons/nations. The W.H.O. chief crediting China is the parallel of Justice Tamberline crediting the University Administrators through the lawyer who ‘stole’ my work. The University like W.H.O. is a common body where anyone has the freedom to publish her / his own truth. If it is truth it will not hurt any other genuine contributor. By ‘failing’ a true contributor and ‘passing’ one who blocked that person’s path, the Court demoted its true status.

Yoga Joseph shares also as follows:
[It is written that God unleashed 10 terrible plagues upon Egypt before the ruler known as the pharoah finally freed the Jews.]
Since we do not know the cause of the Coronavirus and its spread, we are entitled to conclude that god unleashed the virus. As if to confirm this belief – our Politicians openly prayed to Our Father. But many were feeling sorry for reduced shopping facilities on Good Friday – which is a day of mourning.
In Sri Lanka also Good Friday became Easter Sunday and Jesus – reversed the order last year. Since wider world did not learn from Sri Lanka’s experience – God reversed the order during this period. When we fail to protect our Sovereignty,  Sovereignty allows its other half to manifest itself from outside – to the extent we claim to be global.
China’s 2020 symbol is the RAT! As per my Hindu Belief – Lord Ganesh who personifies Faith in parents has the Mouse as His vehicle. The vehicle is the opposite of the Deity in the altar. The mouse has no mind of its own – as in the computer mouse partnership.   All those minds that blindly followed are the reason for the current plague

As per Australian Heart Foundation message:
[Global research suggests that older people and people with chronic health conditions, including cardiovascular disease, are at higher risk of dying from COVID-19 than the average population.
The reasons for this increased risk are still being investigated and are likely to be complex.]
The commonness between essential organs in humans and rats is confirmed as follows:
[The aortic arches of the rat are among the most commonly studied in murine models due to marked anatomical homology to the human cardiovascular system. Both rat and human aortic arches exhibit subsequent branching of the brachiocephalic trunk, left common carotid artery, and left subclavian artery, as well as geometrically similar, nonplanar curvature in the aortic branches. Aortic arches studied in rats exhibit abnormalities similar to those of humans, including altered pulmonary arteries and double or absent aortic arches. Despite existing anatomical analogy in the inthrathoracic position of the heart itself, the murine model of the heart and its structures remains a valuable tool for studies of human cardiovascular conditions]
If rats were killed without respect and gratitude or mercy then they have the power to share their fate with us. That is the way of nature.