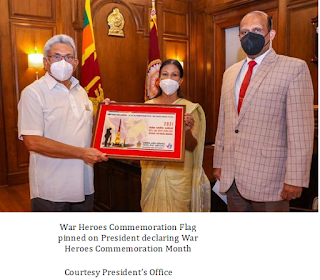 WINNING THE WAR AND LOSING THE HIGHER MIND

A Tamil of Vaddukoddai origin said recently, that my nephew in law Sritharan Mahadevan would not have understood the Thesawalamai law. I said – then he was not a real graduate, but a mere technician. This happens when we fail to do research and discover our own theories or respect those who have already done so. I knew of Thesawalamai law, but not its provisions. Likewise my husband. But when the lawyer representing his sister said that Param was entitled to a ‘small’ share Param said that the distribution must be done as per Thesawalamai law. Then I learnt about its provisions and did not leave it to the lawyers. But to-date we do not know why Param said that – given that he had zero knowledge of the provisions of the law. But he is part of the community that practices the law – especially in relation to dowry system. Since he believed in his father and accepted the dowry system Thesawalamai was within him even though he was not conscious of it. That is the Universal power of belief.

This morning, a leading member of the Tamil Diaspora drew my attention to the article ‘SRI LANKA: Won the “War” but Lost the Law’ published by Mr Basil Fernando through  the Asian Human Rights Commission. I identified with the caption especially in view of my mental opposition to the government celebrating May as war heroes month – as pictured above.

If we take an independent approach and step back we would observe that its other side happened two days later – with the Canadian Tamils using their Political influence to make ‘Tamil Genocide’ declaration. Neither side is Sri Lankan. Hence when truth manifests at the lower level of Sinhala only and Tamil only levels, observers would make the connection. Unlike in the case of my husband, about the dowry system – those who were Tamil only – would not wait for time to  tell. They would immediately manifest the other side as Equals. But this means also that they are far from becoming Common Sri Lankans or Canadians. Hence both are using their respective National status for private profits. Basil presents his conclusion as follows:

[Claims of triumphalism are a manifestation of a degenerate moral sentiment. It is said that the defining quality of civilization is the capacity for empathy. If even a tragic situation such as a civil war does not evoke feelings of empathy for those who have suffered and who continue to suffer, the result is a dead nation – dead psychologically, dead socially, dead emotionally and dead institutionally. Nothing has been won. The truth is that we continue to lose.]

If Basil who is of Sinhalese origin and I of Tamil origin can take senior positions with our respective communities, others also can. But in terms of law, Basil needs to get his own profession clean – so they do not lose the law and therefore their mind. In the above testamentary case lawyers and judges of Jaffna delivered a judgment that eliminated Thesawalamai law from Northern Courts. The reason could be worked out from the following published by A Masinghe through Counterpoint, under the heading ‘Law & the Layman’

[A senior lawyer, a President’s counsel who was also a former President of the BASL making his observations on the current conduct of the contenders, commented that it is appalling when members of the profession resort to cheap mudslinging, misinformation and disinformation in general. ]

The lawyers from Colombo in the above mentioned Testamentary matter did all of the above to ‘win’ the case for their clients who are the parallels of ‘Sinhala-only’ politicians. Our Jaffna lawyers including Jaffna Mayor Manivannan did not have a mind of his own through the values of Thesawalamai. He depended largely on his familiarity with Jaffna Judges. As an educated person who effectively practiced the law of Thesawalamai,  I could not make head of tail out of the Jaffna judgments. Separate state would be a disaster under that kind of leadership.