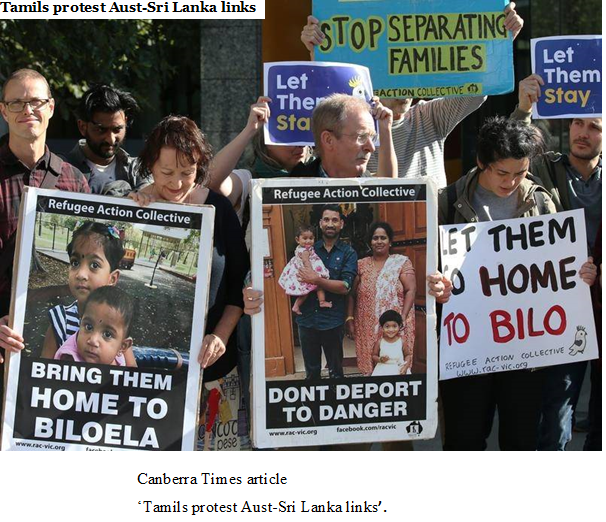 As I watched the news regarding the fight in Middle East, I prayed that this should not happen in Sri Lanka. I am aware of the risk of Indo-China war making Sri Lanka – another Israel, with Jaffna becoming Lanka’s Gaza. Then this morning I read in Sri Lankan News the Canberra Times article ‘Tamils protest Aust-Sri Lanka links’. The real reason was revealed as follows:

[Tamil Refugee Council spokesman Aran Mylvaganam says the protests mark the 12th anniversary of the Mullivaikkal massacre in which up to 40,000 Tamil civilians are believed to have been killed at the end of the Sri Lankan civil war in 2009.]

Through direct sharing with the victims I have reliable knowledge that LTTE also caused its own massacre of Tamils who tried to flee. This is buried under the more powerful side’s massacre. But truth being truth, when there are protests – those protests would also be against LTTE.

The following is an indicator of the Tamil Diaspora Politics in relation to Sri Lankan Tamils:

[A senior journalist based at Chennai, R. Bhagwan Singh says “Although it (the Sri Lankan Tamil Issue) occupied significant media space and high decibel political rhetoric, the Sri Lankan Tamils issue has hardly ever been an election issue where the voter has had a multitude of other issues concerning his life, such as livelihood, irrigation, and corruption. The only time it came close to being a poll issue was in 1991, and that too because of the killing of an Indian leader (Rajiv Gandhi) on the state’s soil.” ] Mr MSM Ayub - Daily Mirror article ‘Why did Tamil Nadu forget Lankan Tamils this time?’

While I feel for the above mentioned Tamil family I am of the belief that the promotion of Mullivaikkal massacre as a ticket to migration to the West is of negative value to the host nations, including Australia. Our nephews in law were very obliging (one even tried to tie my husband’s shoe lace only to be told off) during the time his papers were being processed. Now they avoid our calls and represented my husband in a testamentary matter in the UK. As per our assessment that is fraud. They confirm that they did not suffer enough to be grateful that we shared our investment in Australia, with them.

As per our Tamil culture, juniors have to respect seniors to be free of debt to the provider. If one helps without the duty to do so – the beneficiary needs to be grateful to complete the experience and to feel the governance power that we feel at our level. Those who are ungrateful or disrespectful – slide down to a lower level culture.

In the Australian Tamil community – internal disciplinary action against such ungrateful migrants is absent. This confirms dependence on the young by the old. I published my experience so the folks in Jaffna who continue to follow Thesawalamai culture would be more orderly than they otherwise would have been. They also continue to seek my advice when their actions are challenged. I believe that when members of the Tamil Diaspora truly feel for the victims of war – they would share their wisdom with those left behind – so that we would be truly blessed by our Tamil elders. Towards this one has to be debt-free to service providers within the immediate environment. The who are indebted to family add negative karma – known as sin to the community and the community in turn adds that to the nation. This leads to risk of takeover by stronger powers as has happened in the Middle East.