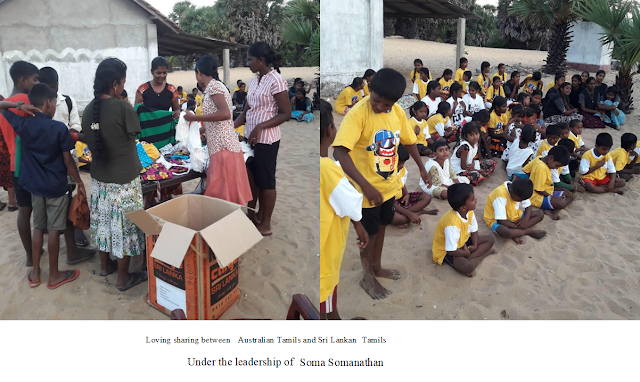 [Amidst our hectic schedules and busy lives, the Rajans meaning the old Pupils of Dharmaraja College the premier Buddhist school, Kandy, Sri Lanka, living in Sydney, grouped together, with their families, at the Nurrangingy reserve in Doonside, a faraway suburb of Sydney for a picnic and barbe party, with their families, to coincide with the Sinhala & Tamil New Year which fell on the 14th April, every year.]

[A Sydney based clothing businessman kindly donated around  4,000 new Children’s clothes including boys and girls T shirts and shorts.

20 boxes of the total 4,000 clothes were shipped to 20 remote schools include

There would have been Tamil groups celebrating New Year here in Sydney when their community in Sri Lanka was anxious about the pandemic, on top of their war related challenges. But when I get two reports at the same time – they are the bases of my experience which support my ‘facts’. Accordingly, I concluded that the Tamil group was more involved with war victims whilst the Sinhalese Buddhists were disconnected with the trauma that Victims of Sri Lankan war continue to live with.

Natural structures are formed by those who forego pleasures and/or endure pain. Mothers are a good example of this. That is how mothers become the binding energy in a family. Likewise, minorities in a group who endure common pain. Thank you Soma for being a sacrificing  mother.