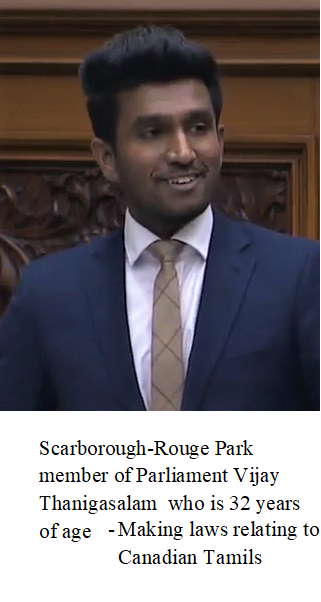 A law is valid and reliable only when it is based on truth or belief. In Democracy, belief is the base. When a law is based on belief, it would strengthen the sovereignty of the whole. When it is based on external knowledge it becomes relative and hence weakens sovereignty of the group that the law-maker is part of.  That is how ‘Buddhism Foremost’ article in the Sri Lankan constitution has made Buddhists dependent on the Government that ‘shows’ most Buddhism.

Tamils who emigrated from Sri Lanka and are currently citizens of other Nations and not of Sri Lanka, have no jurisdiction to make laws after they emigrated which effectively means that they have taken compensation for their pain in Sri Lanka. When they make laws based on the past they cheat their past as well as their present.

When on 06 May, the Tamil Genocide Education Week Act, one has to look into its validity as a law. As per the published reports, the bill was moved by Scarborough-Rouge Park member of Parliament Vijay Thanigasalam  who is 32 years of age. Wikipedia presents the following about this person:

[Vijay Thanigasalam is a Canadian politician, who was elected to the Legislative Assembly of Ontario in the 2018 provincial election.[1] He represents the riding of Scarborough—Rouge Park as a member of the Progressive Conservative Party of Ontario.

Thanigasalam went to St Joan of Arc Catholic Academy (then known as Jean Vanier Catholic Secondary School) and graduated in 2007. He then went on to study at the University of Toronto Scarborough and completed his Bachelor of Commerce in Finance at the University of Ontario Institute of Technology]

The above confirms that Vijay Thanigasalam lacks Sri Lankan experience in education. The LTTE is guilty of Genocide of Educated Tamils, including educated Tamil politicians.  As per the Island report:

[The Bill 104, the Tamil Genocide Education Week Act, establishes seven days each year, May 11 to 18, during which Ontarians “are encouraged to educate themselves about, and to maintain their awareness of, the Tamil genocide and other genocides that have occurred in world history.” The weeklong event coincides with the conclusion of Sri Lanka’s successful war against the LTTE on the morning of May 19, 2009, on the banks of the Nanthikadal lagoon, sources said.]

A true Tamil would discuss and learn how the LTTE caused Genocide of educated Tamils. As per the UNHRC report, they have also included the LTTE as being part of the causal force of the Nanthikadal tragedy. There are enough victims who would provide the evidence needed to establish this.

As per the Island report:

[Canada based sources said that Vijay Thanigasalam openly identified himself with the LTTE even after the end of war. On Nov 26, 2011, Vijay Thanigasalam in a Facebook post stated: “Happy 57th birthday to our national Leader V. Prabhakaran.” However, Vijay Thanigasalam apologized for sharing LTTE material. The politician stated: “In the past I shared material related to the Tamil Tigers. I apologize and I no longer hold those views.”]

As per the laws of belief one needs long and uninterrupted belief to override all other titles. In Sri Lanka, in terms of property – one needs 10 years of continuous adverse possession for prescriptive title. If Ontario is to be a defacto LTTE state - Vijay Thanigasalam needs to have the courage that our politicians had in 1976 to declare belief in Tamil Nation through Vaddukoddai Resolution 1976. This happened 20 years after the Sinhala only Act - The Official Language Act No.33 of 1956

It is most disappointing that Canada is pampering Tamils for cheap political returns.