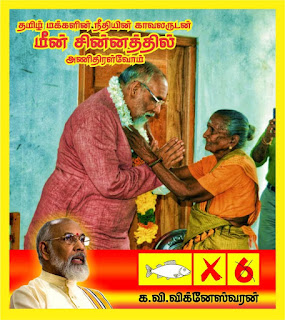 The news that 16 former members of TNA -  Eastern Province have decided to back the current government in the upcoming elections was not surprising. Good or bad – karma is shared with the time anniversary and place of a manifestation. Karuna Amman joined the Rajapaksas and confirmed that he was not independent. All actions manifested by him directly and/or through his followers remain as karmic Energy at that place and would surface at that place during the anniversary of manifestation.
Wikipedia reports about Karuna Amman’s separation from the LTTE:
[On 26 July 2004, Muralitharan broke away from the Tamil Tigers after he alleged they were ignoring the interests of the eastern Tamil people, and claimed to have renounced violence at this point. ]
As per the Ceylon Today report mentioned above :
[The office of the Governor of the Eastern Province, issuing a Media release, stated that a former TNA Local Government representative and 15 people’s representatives, have decided to back the Sri Lanka Podujana Peramuna (SLPP), ahead of the General Election.
These former TNA members revealed this decision during a Media briefing held in Trincomalee on 28 July.  These ex-TNA members stated that the people of the Eastern Province had suffered terribly during the 30-year conflict and charged that the TNA had always looked after its own interests and not of those who had voted for them.]

To me the above separation is also Déjà vu. How can we use this knowledge of law of probability to prevent disaster or promote progress?
Wikipedia presents the following reasoning:
[In probability theory, conditional probability is a measure of the probability of an event occurring given that another event has (by assumption, presumption, assertion or evidence) occurred.]
The more transparent our purposes are – the closer we get to projecting their outcomes. The more intelligence we had about the ethnic problems within Lanka, the more prepared we would have been for the Easter bombings. That would have helped us plan as the ‘other side’ of the matter.
When the purpose remains it is likely to manifest in a ‘free’ environment. Such manifestation would confirm the original purpose.

Karuna’s manifestation that he was more dangerous than the coronavirus because he killed thousands of soldiers confirmed that he was seeking recognition that he thought he would get but did not get. The separation from Northern Rebels on 26 July 2004 was a true separation as per his character. It was a business deal which made him a mercenary. The current separation on 28 July 2020 happened due to the purposes then and now  being more or less identical.

The consequences of the 2004 defection resulted in defeat of Northern LTTE and deaths and sufferings of Northern civilians. The parallel of that in this instance is likely to be defeat of Tamil political leadership in North and deaths and sufferings of Northern civic rights. All because of internal divisions due to selfishness. This includes Mr Wigneswaran who also broke away from the TNA. Why? Because he copied outcomes and did not generate them from zero base in a new discipline where he was junior to rebel leaders as well as to politicians. The mind needs to merge for minorities to acquire exponential powers.

A write up headed ‘Who is this Vicki Sir?’ by Mr Muthaliar Senthurselvan includes the following:
A spiritual person who eats only vegetarian food. This status is minority in Northern Province where majority are non-vegetarians. More interestingly – the ‘achievements’ of Judge Wigneswaran in Mallakam District Court has been included in that write up. But, when Mallakam District Court delivered judgment in breach of the Thesawalamai law – Mr Wigneswaran remain silent. He wrote to ask me where he had delivered a wrong judgment. Back then I did not know that Mr Wigneswaran had worked as Judge in Mallakam District Court. I said it happened during his time as Chief Minister. Now that I know that he was Judge in that institution – the connection is more firmly established. One who pays her/his respects to the law will hurt when that law is used to miscarry justice.

The junior castes were used in the armed war. They were recruited for the purposes of war and then abandoned. Listed in  Appendix is a recent conversation with a fellow Tamil.

Tamils divided internally for the same reason caste based separations happened within the Tamil community. Both seniors and juniors used the other for visible outcomes. Once that ‘show’ was over – the two returned to their natural quarters. One sees that in the main Sinhala political parties also.
The good thing about North-East separation is that North is more likely to rise again through intellectual pursuit instead of being tempted by armed war.

Appendix
…I believe I make reliable family structures. They are my temples. Recently also when I heard that a 19 year old girl had run away from home in Thunaivi to her boyfriend’s home in Kottakadu –I advised the parents to legalise the marriage. I helped them not feel small because the parents have demonstrated good relationship. They just did not know enough to structure a family. There are many unknowns in that community and I am careful not to preach. Our relationship is structured on my terms in relation to work for which the mother gets paid. Through genuine work – within the guidelines provided by me they get blessed with the Energy that I have developed in family and workplace. From time to time I draw Lakshmanan Kohdu which they also disregard due to their desire based enthusiasm.  That is how I share my life with those folks also. Recently about a week before judgment was due in a Colombo land matter – I dreamt that the statue of Gajalakshmi that we have here in Sydney was in the altar of this temple in Sangarathai-Thunaivi. When judgment came it was a win for us after 20 years of battle. The vision confirmed to me that I was blessed by Divinity and my family elders from whom I inherited the Energy that the temple represents. I do not know of another in our family who would have had the courage to go and live in Thunaivi and gotten to know the folks there – the way I have. From what you have shared in this instance, I doubt you would have.

Caste based discrimination beyond work related needs was evil. We need to right that karma before talking about other development. Affirmative action is needed so we do not let the juniors become our Equal Opposition. A respected elder from across the road at Sangarathai said that he would fear to live in Thunaivi. I got the courage then due to my belief . If all of us followed in your pathway who would lead these juniors and prevent another war?]