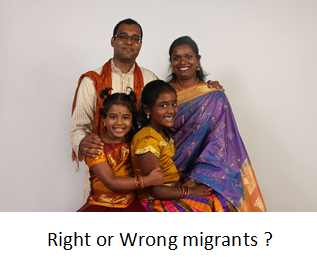 The message from Facebook said ‘Shangeetha Sritharan is a new friend suggestion for you’. I would have ignored  it if not for another message headed ‘SORRY MAAM!’ from a member of the St Joseph’s College alumni. That came first along with the lawyer’s ‘suggestions’ as to the next step with the Tamil family whom we facilitated to migrate to Australia but who have consistently treated us as ‘outsiders’. The above seemed to me to be ‘Sorry Mami’ (Sorry Aunty). Since I use indicators once I discover truth – I felt I had to act in the family matter. One who does not regulate the family has no moral authority to regulate community and beyond. We may ‘show’ rights in our favour and wrongs in others. But unless they are underpinned by truth, they do not get the support of exponential powers that work on their own. When I get indicators – I feel the urge to act on behalf of the whole that I am part of. So I sent off the following legal communications to members of the family – affording them the opportunity to participate. 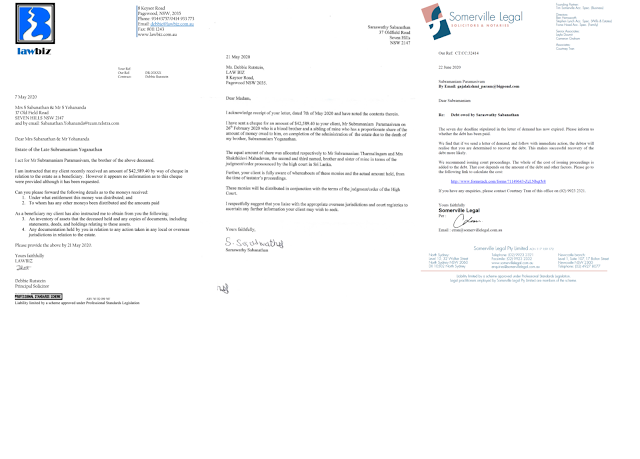 Only one member of the family responded to acknowledge. The others remained silent. Then again I received the next indicator to act. It came through Facebook due to Mrs Shangeetha Sritharan who came to Australia and sponsored her parents and sister – all out of our root.

In parallel – the Tamil community is resurfacing the Black July facts to accuse the Sri Lankan government of wrong doing. My question is how many of those who are questioning felt that pain as if they were directly affected? Was there a strong bonding between Colombo Tamils and Jaffna Tamils to authorise one to act on behalf of the other?  The above family from Vaddukoddai for example – have chosen to ‘separate’ prematurely rather than  regulate themselves through common structure. They cheated Thesawalamai culture and they cheated common law – through separate thinking. When they got dowry – it was Thesawalamai. When they desired Equal share – Thesawalamai was discarded and common law claim was made. The sad part is that the Jaffna Judiciary upheld their conduct and Jaffna leaders – including Mr CV Wigneswaran chose to remain ignorant of this truth in our community.

But someone from my current community wrote to me as follows:

[I have read over the attachment and I'm sorry this happened to you.

It's very disturbing that the sheriff actually broke into your home and sold your belongings for less than their value and the stress this put you, your family and param through. ]

This current community is like the Colombo community that I was part of after 1968. It was multicultural largely due to work opportunities and requirements. Given that the Vaddukoddai family sponsored by us failed to demonstrate share in our pain once their desires were satisfied – I find it more and more difficult to blame the Government alone for the July ’83 tragedy. We have to first clean our breaches of duty at government level, before we can blame the government. We demand accountability from the Lankan government but not one member of the Australian Tamil community has questioned us or the other side in this community conflict.

Once the matter was raised to Judicial level through Thesawalamai law – it was the duty of the community to resolve it within the community. Otherwise it dilutes the self-governance claim made at Community level. On that basis – to the extent the LTTE was not disciplined by community leaders – for the LTTE’s part in the 1983 riots – the Tamil community of North lost the real power of truth to judge at Regional and Global levels.

A look into  Shangeetha Sritharan’s Face book sharing confirms that many in that family share with each other and are silent with us – their root in Australia. This means single sided judgment when we reveal our expectations that they follow the structured law. What they do not know is that the ledger of karma is continuously written and debts unsettled become sins. Their sins become the sins of the community that they claim to be part of. This is the Tamil Diaspora in whose name the ethnic discussion is falsely elevated to global level. Only those who have settled their dues to family get promoted to community level. Those who settle their dues to community get promoted to national level. Those who settle their dues to the nation get naturally promoted to regional and/or global level. Others are frivolous participants who demote the dignity of the issue.

We as a community have failed the test of Accountability.