Article 356 of the Indian Constitution begins as follows:

[356. Provisions in case of failure of constitutional machinery in State
(1) If the President, on receipt of report from the Governor of the State or otherwise, is satisfied that a situation has arisen in which the government of the State cannot be carried on in accordance with the provisions of this Constitution, the President may by Proclamation
(a) assume to himself all or any of the functions of the Government of the State and all or any of the powers vested in or exercisable by the Governor or any body or authority in the State other than the Legislature of the State;
(b) declare that the powers of the Legislature of the State shall be exercisable by or under the authority of Parliament;………………………….]

The above picture came to my mind when I read the Tamil Guardian report headed ‘Sri Lanka’s Supreme Court hears petition by Jaffna University lecturer appealing practice ban’
The matter before the court is presented by the Tamil Guardian as follows:

[Sri Lanka’s Supreme Court began hearing a Fundamental Rights Petition filed by Jaffna University senior lecturer Dr Kumaravadivel Guruparan, challenging the decision of the University Grants Commission and University of Jaffna to bar him from legal practice.
Last year, the senior law lecturer and prominent civil society representative was barred from engaging in private practice following pressure from the Sri Lankan military, after he took up a public interest habeas corpus case into the 1996 disappearance of more than two dozen Tamil youth.
…. On August 21, 2019, the military sent a letter to the University Grants Commission (UGC) asking whether Kumaravadivel Guruparan, Senior Lecturer and Head of the Department of Law at Jaffna University, had permission to engage in private practise. Acting swiftly, the UGC that very same day forwarded the letter to Jaffna University.]

The said letter is as follows: 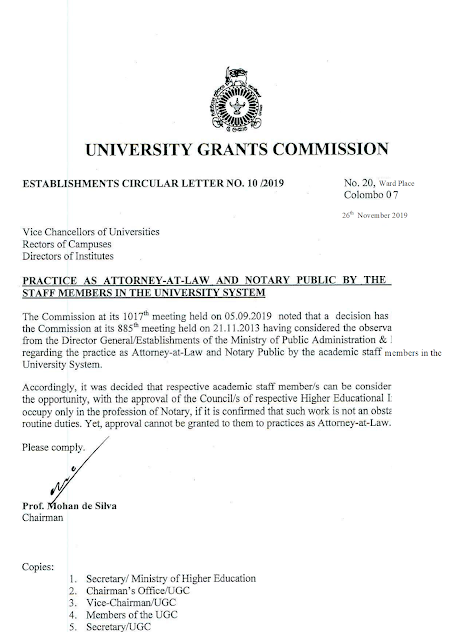 As per my interpretation this is common to all law academics and is the parallel of a policy in National Parliament - that has words to the effect ‘Members of Parliament’ are permitted to engage in Notary work but are not permitted to practice as ‘Attorneys at law’. To my mind the parallels in my profession are book-keeper and Accountant. The latter represents the whole profession.
In principle, is the above a just  order? If  as Dr Guruparan seems to claim – it is ‘no’ why not?
On 03 April 1980, the UGC wrote as follows to the Universities, through circular 69:

(2) In regard to the issue at (1) above, the Attorney-General has ruled that the University Grants commission and each Higher Educational Institution is a Public Corporation within the ambit of article 170 of the Constitution of the Democratic socialist republic of Sri Lanka.
(3) As for (2) above, the Attorney-General has expressed the opinion that where such Circulars and Circular Letters deal with the management of internal affairs of the University grants Commission and the Higher Educational Institutions, the provisions of the Universities Act, No. 16 of 1978 will supercede instructions contained in such Circulars and circular Letters, but that it was open to the commission and the Higher Educational Institutions to adopt and to act upon any such instructions as are not inconsistent with the provisions of the aforesaid Act.]

To my mind, the above clarification confirms that Government does not have the authority to directly administer the Universities. It however has similar powers to those provided for under article 356 of the Indian Constitution. As per the above mentioned article 170:

[“public corporation” means any corporation, board or other body which was or is established by or under any written law other than the Companies Ordinance, with funds or capital wholly or partly provided by the Government by way of grant, loan or otherwise;]

The above is like the China situation in Sri Lanka. It can ‘give’ money but not make policy including directing as to how that money is to be spent. There are arguments here in Australia also over Labor MP - Mr Shaoquett Moselmane’s connections with the Chinese leadership. In essence one sovereign entity has no right to influence through ‘free money’ – a member of another sovereign entity. Free money is allowed only internally within a sovereign unit.

In the case of Democratic Parliament and Judiciary – they are two sovereign entities due to the respective roots being different. Former is place based and is current local through electoral power. Latter is time based and is ancestral. Hence the Doctrine of Separation of Powers – as required between nations – such as China and Australia.

But for Administration – courts do come under the Executive Government. Not for Governance. That in essence is Article 356 of the Indian Constitution. In the case of Ratnasingham Vs Tikiri Banda Disanaike and Others – report in 1998 1 SLR – Justice Feernando concluded  as follows:

The UGC which is the parallel of  the President of India and the individual universities are the parallels of  States. Hence the question is whether UGC has the authority to make a governance order to individual Universities which are confirmed to be sovereign units ?

Every university has the duty to meet the needs of its local community and through such service connect to National and Global values – in research and teaching. The practice of law in terms of fundamental issues particular to that region – in this instance Jaffna, is part of the Governance needed by Jaffna. The Governing Council of the University of Jaffna has the responsibility in this issue and not the UGC. In this instance the UGC acted like the government that dismissed the Chief Justice.