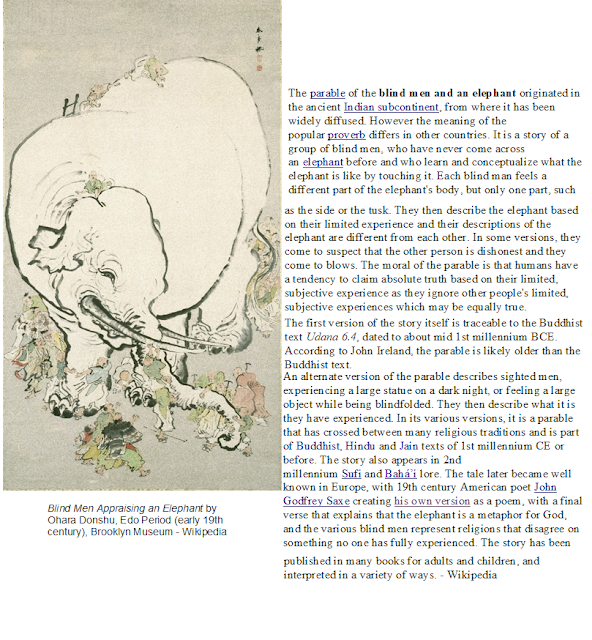 Years ago our granddaughter – then four years old – came running to me and said words to the effect ‘They are saying that our t-shirts are dirty’. ‘They’ were the residents of the Salvation Army hostel next door. ‘They’ were arguing between themselves and I found it disturbing.  Our four year old translated it in her own way on the basis of  her desire at that time – meaning she wanted a new t-shirt. It’s an example of the blind describing the elephant.

We had such an example yesterday about the Jaffna Library, on the basis of my article ‘BURNING  OF LIBRARY GAVE US  WISDOM’:

Mr KKS Perera : In his Daily Mirror article ‘Who Burnt One of South Asia’s Biggest Libraries?’ Mr KKS Perera points to evidence that LTTE did it. As an outsider, he needs to prove."
Ms Gajalakshmi Paramasivam  has not comprehended the reading or not grasped the essence of my article. Where have I said LTTE committed the crime?

Gaja: (meaning elephant) :               Thank you Mr Perera. I draw your attention to the following:
(1)  [DIG Edward Gunawardene wrote his memoir, relating a totally different story accusing LTTE of the crime
(2)  Government declared a state of emergency effective 5.00 pm on election day, also imposed curfew restricted to the District of Jaffna. The good DIG [Rtd] expects us to believe that it was the Jaffna rebels led by V. Prabhakaran that torched the 93,000 books, new and old, valuable collection of manuscripts including Ola-leaf varieties; the symbol and pride of Tamils of North Sri Lanka. He based his inference simply on caste factor.
(3)  Retired DIG Edward Gunewardene [EG]’s speculative allegations sans provable facts on the Jaffna library inferno in June 1981, stirred up a hornets’ nest six years ago when he accused the LTTE rebels of the crime. A memoir by the retired police officer, leaks a best-kept police top secret for three decades–was it the LTTE that torched the Jaffna Public Library?]

I consider the above to be subjective evidence of Mr EG. You have stated ‘Ms Gajalakshmi Paramasivam  has not comprehended the reading or not grasped the essence of my article.’

The way I read it – it raises the possibility that LTTE was involved. It’s valid to the extent a DIG was recognized as a senior  official. You conclude also as follows:
[Rev. Fr. David, the scholar and community leader who treasured the collection of valuable material died of a heart attack a couple of days after the tragedy. The ‘Reichstag fire’ in Germany, an arson attack on the  home of the German parliament in Berlin named Reichstag, took place on  February 27,  1933, exactly four weeks after  Hitler was sworn in as German Chancellor. Hitler’s government accused communist agitators in general. Nazis used the fire as an excuse to claim that communists were conspiring  against the government, and the happening was considered key to the founding of Nazi Germany.  Mysterious are the ways destiny moves to downgrade the responsible to the dustbin of history. Have we learnt our lessons? ]
I believe that to the extent you have invested in a group you would have insight into their minds. Likewise myself in terms of the LTTE. The government was responsible to establish the logical connections. Hence I said you needed to prove it. As for any role by LTTE – one does not need proof of the damage to Education by the LTTE. They themselves were open about their priorities. As you may be aware – I connect the government’s failure to standardization policy and the Buddhism foremost policy. You have used the German example. I usually use local connections to identify with possible karma. You would write as you feel and make connections. I would read as I feel and make connections. The two may not be the same – where ‘outsiders’ (Germans) are included. I am a bit dumb when it comes to many happenings in the West including in Australia.
Regards
Gajalakshmi

What is the truth common to the Tamil Community? Since Shenali has engaged more with me than any other above – I choose to respond on the basis of Shenali’s response.
Q : If Jaffna library was burnt by UNP and UNP Ranil apologised for it too
If virtually all Tamil riots and attacks are associated with UNP
WHY DO TAMILS CONTINUE to vote for UNP???

A: Tamils have a love-hate relationship with the UNP. Given that the Library was torched during UNP rule – they are responsible – full stop.

Wikipedia presents ‘what happened’ as follows:

[On the night of June 1, according to many eyewitnesses, police and government-sponsored paramilitias set fire to the Jaffna public library and destroyed it completely.  Over 97,000 volumes of books along with numerous culturally important and irreplaceable manuscripts were destroyed. Among the destroyed items were scrolls of historical value and the works and manuscripts of philosopher, artist and author Ananda Coomaraswamy and prominent intellectual Prof. Dr. Isaac Thambiah. The destroyed articles included memoirs and works of writers and dramatists who made a significant contribution toward the sustenance of the Tamil culture, and those of locally reputed physicians and politicians.]

With the works of our ancestors – the Library was the parallel of ‘Heroes Memorials’ that the LTTE maintained with due diligence. They would never think of damaging such memorials. My direct interactions with them confirmed this kind of respect that they had for ancestors. They did not know how to articulate the emotions that they experienced when current Tamils were physically attacked by Sinhalese. I have found this lack of ability to use common structure  to be the case with Australian academics also. The Vice Chancellor of the University of NSW called the Police instead of discussing the issue of Democratic Resource Management because he reacted through the seen (I am Indian looking) rather than go into the substance of my contribution. Had he consciously practiced Equal Opportunity principles – he would have started from zero advantage position and used either the assessment of my work by the Medical Faculty managers who benefited from it or would have done the assessment himself. In academic language the former is using our predecessors’ discoveries and the latter is to do our own research. Since I was taken to be ‘cheap’ by an ‘American return’ Australian wisdom reversed the treatment to the Vice Chancellor.

In the above mentioned tragedy – my service’s parallel is that of the Hon Ananda Coomaraswamy who was an Artist and Metaphysicist Professor Isaac Thambiah and most of all Mr K.M. Chellappah shared his personal collection as the intelligence capital of the Jaffna Library. Since all of their work has benefited beyond their time and place – they are still there. When the representations of their work is burnt – they become higher Energies and empower those who believe in them and respect them. It is some of this that led to the Assassinations of those responsible for preserving those collections. The root medium is the consolidated mind of Tamils who valued their work as being ancestral. The LTTE were the arms and legs through which the power worked to restore Dharma/Righteousness.

I learnt about this power of my work – when the above mentioned Vice Chancellor was punished through those who demonstrated belief in me – starting with the Chancellors and other migrant staff who also felt discriminated against. Once we feel – we are true. Truth works independently to deliver its own outcomes.

LTTE had its own laws. The people that LTTE represented – had no higher measure of right and wrong. Ultimately it was the Government that was responsible for this. May be the Sinhalese are also in the same boat – as Shenali keeps indicating. But Tamils living in isolation would not know those Sinhalese. To them the Sinhalese are those who came into their area – not to educate but to dictate. As revealed before – a junior police officer tried to teach my group – that Krishna was a demigod. I had to first educate him about his duty in Vaddukoddai – as per secular pathway. I then realized the dangers of ‘invasion’ due to ignorance and blind following of orders by those who did not know what their ‘duties’ were. There is no duty unless there is a common structure. A Buddhist in Hindu area – has to limit her/himself within the borders of secular law.

Positions help us relate to each other. They may be inherited or developed by us. Relationships are like permanent plans. One does not need to think actively on merit basis with long term relations. On Tuesday, when my cousins Priya, Chitra and Ravi came over – we felt free because of this ancestral connection starting with our great grandfather A M Pillai who contributed strongly to education in Jaffna. Our parents maintained the relationships and we are now doing likewise.

The Community parallel of Mr A M Pillai is the British. Tamils are largely limited to British structures in relating to Sinhalese. But this has been demoted to ‘link’ level by the Sinhalese and Tamil Nationalists  who are not conscious of the ancestry and hence the separation and nationhood claims to preserve our own investments in our Ancestors as well as wider world – as we discovered through the most recent British elections.

Tamil Nationalists without respect for ancestors will continue to use their own laws. The likes of Rajapaksas would invoke those. As per Dharma - LTTE had the authority to punish those who used them and discarded them. If the Hon Ranasinghe Premadasa had invested more in the Common Ancestry through Education – the Ancestral Spirits of Tamils would have protected him from dying prematurely. Only Tamils can manage Tamil militants. Others who punish the Tamil Militants outside British laws  or Thesawalamai Law - will lose the protection of Tamil ancestors. This is why Devolution is needed.