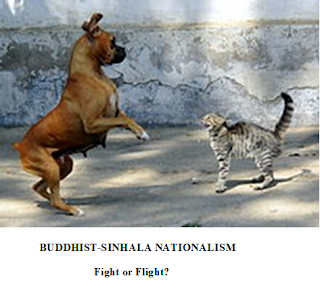 A cousin rang from Colombo to clarify how to present accounts to a member of the Diaspora. My cousin explained it in her own way. I used my way of showing the transactions individually – without netting one off against the other. That was my heritage from my Accountancy studies – in which arithmetical errors in accounts show up through Trail Balance  and we were required to correct them. I usually reversed the wrong first and then put through the correct entry. My cousin was happy to go along initially.  But in the end my cousin said that she preferred to show it her way. I was thinking of the other side – who was not present where the transactions were happening physically. Eventually I said to my cousin that she was like our Vaddukoddai staff who after some time - start telling me how they would act. This happens when they reach the maximum level of their own expectations which are largely in the form of outcomes order rather than common structural order. If I do not ‘oppose’ I am drawn down to their order of thought. This has little respect for seniors – especially those who are not currently living in their immediate vicinity.

To my mind, Sri Lanka’s ethnic problem is similar to the above problem. Are we to net off minority contribution against majority or show them as separate autonomous contributions? Where there are clearly diverse structures  through which our work passes – one cannot be netted off against the other – as in senior-junior relationships. It would be misleading and counterproductive to development.
In his Republic Next article ‘Tory tangle: Sri Lanka satisfied with Conservative clarification?’ – Himal Kotalawala states:

[A contentious reference to Sri Lanka in the election manifesto of the United Kingdom’s Conservative Party resulted in much confusion yesterday, with Government MP Udaya Gammanpila and others accusing the party of challenging Sri Lanka’s territorial integrity.
The reference is as follows:
“We will continue to support international initiatives to achieve reconciliation, stability and justice across the world, and in current or former conflict zones such as Cyprus, Sri Lanka and the Middle East, where we maintain our support for a two-state solution.”
The problematic wording of the line, particularly the absence of an Oxford comma, has led to the inference that Sri Lanka is included in former conflict zones for which the Tories support a two-state solution.

MP Gammanpila, writing to Foreign Relations Minister Dinesh Gunawardena yesterday, noted that the manifesto was published over a week ago and Sri Lanka’s High Commission to the UK has remained mum about what was a clear challenge to the country’s territorial integrity.]

Even though I share my work regularly with a few of UK’s political leaders - I do not know the thought structure of the UK Conservative Party’s leadership as well  as I know the current Sri Lankan Government’s . But as per the returns for my work, I do consider the UK system to be far more civilized than that of Sri Lanka’s where there is not even a basic ‘common’ acknowledgement to communications. Our experiences get completed at that level. I once received a direct response from Mr Blair when he was Prime Minister. I did get response from Mr Navin Dissanayake over the London Embassy issue but not in the case of others. The returns happen through  our true common investments. To my mind, to the extent Tamils of Sri Lankan origin who continue to carry forward our British heritage would be ‘heard’ by current British governors. The link is far weaker with those who have disconnected with that heritage.

[Subsequent to the representations made, the Ministry said, Deputy Chair of the Conservative Party Paul Scully had issued the following clarification:
“The party’s position regarding Sri Lanka has not changed… To be absolutely clear, the two-state line in the section was intended to refer only to the Israel-Palestine situation in the Middle East (as is stated policy). The Commitments to Sri Lanka and Cyprus were simply about continuing existing efforts to support peace and reconciliation in divided societies.”]

Tamil National Alliance highlighted this structure in the UK on 24 November. I included it in my article dated 25 November under the heading ‘SINHALA NATION V SRI LANKAN NATION’
Hence, to my mind, the British Government policy is inclusive of the Sri Lankan truth – that majority race are not qualified to be seniors in government. It is noteworthy that these expressions are being published after Mr Ranil Wickremesinghe who is naturally carrying forward the British heritage also – stepped down from the position of Prime Minister. Not only the UK – but all foreign countries would need to restructure their own positions vis-à-vis the new Government structure of Sri Lanka.

Taken globally – is the UK Conservative Party not confirming the acceptance of the structure that President Gotabaya Rajapaksa outlined in his ‘Presidential Speech’ – that he was by belief -  the President of Sinhala-Buddhists?  Others outside that description could take it or leave it – i.e. Oppose it or ignore it – i.e. make ‘Fight or Flight’ decisions. Tamils who did take it – expressed their parallel – in 1976 through the Vaddukoddai Resolution 1976. That was the Will written by Tamil Political Leaders. Even now, those who draw on that heritage with respect would be supported by that Energy which from time to time comes in the form of Leaders outside Sri Lanka. Once our work is Energy – it is Universal – beyond time and space borders.

With or without the Oxford comma, as per my observation, the Common British does consider Sri Lanka to be a divided nation. Recognizing the truth is important in dealing with the issues that are challenging our own capabilities in relation to distant investments. The full message published was as follows: 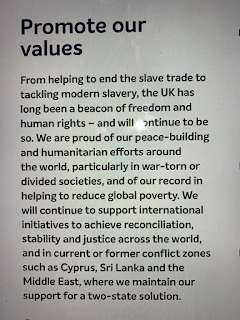 Nationalism is strongly linked to illegal immigration which affects most host nations. Beyond common laws, Truth alone can regulate and guide host nations to find the valuable migrant who deserves orderly life. Showing respect for Tamil Nationalists in the UK  is therefore valuable to the UK government and so long as this is done – the ‘Terrorism aspect’ would become dormant.
Be they Sinhalese or Tamils – members of the Sri Lankan Diaspora who are true to their respective communities and who do not hold official portfolios – work the system of truth  - and are of most reliable order. They are entitled to the same level of immunity as the head of State – including in another nation.

Political statements and promises made during election time – are outlines of  facilities through which the People express their views. To the extent they are based on true experience of the leader – they become sustainable. To the extent they facilitate the voter to express her/his truth – it would be a divine power that guides the natural environment of the voter. Otherwise we do not need laws that outline our right to free speech/expression, including through our votes.

Wherever Autocracy has failed and Democracy has been adopted – diversity is essential. Hence Equal Opportunity laws that facilitate physical separation. To my mind that is how the UK politicians  view diverse races in Sri Lanka. In terms of the above mentioned response ‘The Commitments to Sri Lanka and Cyprus were simply about continuing existing efforts to support peace and reconciliation in divided societies.’ it is one of hope that the immediate past Sri Lankan government’s values would be carried forward. Every true interpretation is valid in a public forum.

Within host nations including Australia – there are many nations. But only a few express them and to the extent they are true to themselves – they are taken as accepted by the system of Truth – known as Dharma in my world. Acceptance by government and other senior groups helps comfort the victims – that they are not alone. Caste based isolation, to my mind was a reason for JVP as well as LTTE militancy in Sri Lanka. If separated on the basis of race, Reverse Discrimination within each race, is a real and present risk.