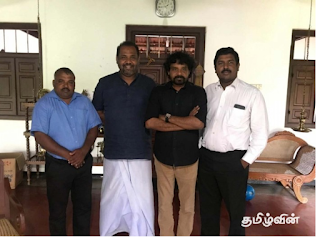 Tamilwin’s news report regarding Indian Tamil cinema director Kalanjiyam was brought to my attention yesterday. As per that report at https://www.tamilwin.com/community/01/233452?ref=home-imp-parsely:

1.     Mr Kalanjiyam came to Sri Lanka to participate in the Great Heroes Day celebrations at the University of Jaffna
2.     He was attacked and wounded by Sri Lankan Armed Forces
3.     Mr Wigneswaran – former Chief Minister of Northern Province urged Mr Kalanjiyam to return home as there was no guarantee for his life if he continued to stay there
4.     Mr Kalanjiyam feared that he would be pushed out of the plane to Colombo but he comforted himself with the thought that it would be an honor to die at the place where his leader had lived.

As per a later report the Army’s action as reported was denied by the Sri Lankan Army.
I was disappointed to note that a Vaddukoddai lawyer Mr Kanagaratnam Sugash was pictured with this Indian trouble maker. To my mind if Mr Kalanjiyam considered himself to be a follower of LTTE leader – he came to Sri Lanka to profit from armed militancy. Given my investment in education including in Vaddukoddai – armed militancy is a distraction which naturally dilutes my investment in education in the same area. Mr Kanagaratnam Sugash who practices law in that area is being disrespectful of his own heritage.

In contrast – Mr Kamal Haasan – also a Cinema cum Political hero - has raised a question at policy level – as to why Sri Lankan Tamils and Muslims been left out of the Citizenship Amendment Bill. This is involvement through policy while Mr Kalanjiyam was interfering with Sri Lankan Tamil issue. As per the laws of Democracy – an Indian has no right to directly participate in Sri Lankan Affairs and v.v.  It was this kind of indiscriminate mixing that led to serious loss of status for the Indian government through the assassination of  the Hon Rajiv Gandhi. It happened because LTTE leader assimilated through cinema power which became political power through Mr MG Ramachandran who was referred to as ‘Big Brother’ by Prabakaran.  This is what Mr Wigneswaran also has inherited after retirement from the Judiciary.
After Vaddukoddai Resolution 1976 – Sri Lankan Tamils are an independent group and it is disrespectful of that independence to attribute credit to those who eliminated those seniors who automatically disconnected with that Political heritage.

The ancestors of the University of Jaffna include not only Sir Ponnambalam Ramanathan but also all those who disciplined themselves to enter University and raise their minds to form higher level  thoughts. It is a memorial of the ‘loss’ of merit based entrance to University through the Standardization policy. It is NOT a memorial for armed militants. The ruling by the University authorities ought to have been respected by all concerned including those like Mr Kalanjiyam who is in the Cinema industry.  Cinema is a distraction that University students cannot afford.
As per IBC news – the ban on LTTE as a terrorist organization has been lifted by the European Union. As per Wikipedia – [ The European Union banned LTTE as a terrorist organisation on 17 May 2006. In a statement, the European Parliament said that the LTTE did not represent all Tamils and called on it to "allow for political pluralism and alternate democratic voices in the northern and eastern parts of Sri Lanka"]

The lifting of the ban confirms that Sri Lankan Tamils as a community have strongly demonstrated commitment to democracy and political pluralism. The timing confirms that the risk of active discrimination against minorities – by the new Sri Lankan government has been recognized by international governments. That is how the system of karma works to balance as per Dharma. Sri Lankan Tamils need to go back to investment in education as our express pathway to being a truly independent community. That is also the best way to oppose the new government driven by wins through simple majority.   The value of higher education is its express pathway to Absolute power of Truth. We learnt lessons through the war. Owning our own mistakes will naturally lead to ownership of the matter. Even if the Sri Lankan Army had taken action in the war area – Mr Kalanjiyam had the duty to recognize that they – as the relatives of those officers who died  in combat had the priority rights to honor their heroes and prevent foreigners from overriding their right to remember and honor their work relatives at that place. Work relatives are higher level relatives than biological and / or cultural relatives. That is the way to true and lasting freedom.