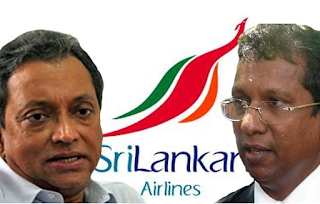 In 2004 when I participated in the 25th year anniversary celebrations of Airlanka/Sri Lankan Airlines, I refused to accept the plaque of honor prepared for me as a pioneer. The main reason was that I could not identify with the heritage from Singapore Airlines in those celebrations. Refusing to accept the plaque was my way of paying our Ancestral dues/royalty. Years later – I was proven right when we all learnt about the internal corruption within the Airline’s top management. Had the staff within kept on paying their royalties to our parents – our founding management-team we would have continued to be economically viable. One does not need clean leadership to preserve one’s heritage. All one needs is one’s Truth. Every member of the staff – past and current - of Airlanka/Sri Lankan Airlines who pays her/his  true dues to the founders still carries that National carrier in them. To the extent they are valued – the Airline will be valued as it was under Singapore Airlines Management and its heirs.

Like in customary culture – there are high pathways and there are low pathways. High pathways answer to wider sections including those we are not physically connected to. Where a value developed by us goes beyond time and/or space borders – it confirms  a higher pathway. The moment we fail to carry such values – we start producing outcomes which confirm travel through lower pathways. This has been the problem with Sri Lanka and its National carrier. One of the comments to the Colombo Telegraph article ‘Pilots Guild Accuses SriLankan Airlines Chairman And Directors Of Being Selfish And Incompetent’ explains this as follows:

‘Hiring Ratwatte as the CEO because he was an ex pilot is like appointing a taxi drive to manage a large transport corporation.’

The first Chairman of Airlanka Capt Rakitha Wicremanayake was also a pilot. To me that was less significant than the fact that together with other Singapore Airlines staff – of multicultural origins – we had a firm management structure to learn from and recognize a firm base for our own performance. Cleverness in one aspect is secondary to the ability to harness strengths needed for common management.

A big part of the blame for the current crisis goes to Mr. Weliamuna who to my mind went beyond his mandate to criticize areas that were strictly ‘business’. That investigation was political and ought to have been limited to the one way political path.  In business, like in the system of karma – one has to show the connection between visible causes/costs and visible effects/benefits  and leave it to the readers/users to decide. The above comment about the CEO applies also to Mr. Weliamuna.

On 27 April 2016 – the Colombo Telegraph through its article ‘SriLankan CEO Ratwatte Dismisses Weliamuna Report, Says No Proof Of Corruption’ reported:

[In a dramatic twist the yahapalanaya government appointed CEO Capt. Suren Ratwatte of SriLankan Airlines had told Members of the Pilots Guild that there was no proof of corruption and malpractices as highlighted by the Weliamuna report. This was revealed by Capt. Renuke Senanayake the President of the Airline Pilots Guild in writing to the airline’s Chairman Ajith Dias yesterday.
The first government-commissioned inquiry into the previous Rajapaksa regime’s acts of corruption, fraud and malpractices was carried out by the Lawyer J.C. Weliamuna along with his team comprising of senior lawyers U.H. Palihakkara, B.A.W. Abeywardane, M.K.Bandara. This six week long exercise cost the tax payer Rs 3.5 million.]

The way the organization is viewed would vary as per each one’s purpose – some true to their heart, others as per their position  mandate and many others as per their desires. The above group of lawyers were like auditors and they failed to report on the auditors’ failures . I raised this question more than a year before the above comment by the current CEO of the Airline:

As per the published Annual Report – Sri Lankan Airlines is a Public Limited Liability Company with the following Shareholders:

The Auditors who certified the Published Accounts of the National Carrier are:

What were all of the above parties doing when Mr. Nishantha Wickremasinghe as Chairman was acting corruptly?] (http://austms.blogspot.com.au/2015/04/gajalakshmiparamasivam-08-april.html)

But the team of lawyers headed by Mr. Weliamuna did not raise this question about auditors. As per the report ‘Weliamuna Report recommends criminal prosecution of SriLankan Chairman, CEO’ by Government’s own system:

[The BOI also raised questions about the suitability of appointing a retired Army Major General, P. Chandrawansa, who did not have aviation security experience on a salary of 450,000 rupees, without following recruitment procedure and accused him of engaging in political activities while in the employment of Sri Lankan Airlines.]

Given that the Weliamuna report failed in its basic duty to report impartially – should not the team also be asked to refund the Rs. 3.5 million they received out of tax-payers’ money ? The current CEO’s appointment would not have happened if not for that report which was political. One who criticizes political irregularities ought to use her/his own Truth or show the pathway that would lead to curing those weaknesses through intellectual exercise.

The Weliamuna team of lawyers have confirmed that they do not have ‘ownership’ investment in their own profession. They ought to have had demonstrated-experience in criticizing their own Judges before embarking on criticizing leaders outside their professional boundaries. Lady Justice has her physical  eyes covered  so her insight would be sharper. The parallel of that would have been no-fee investigation by these lawyers – first into the corruption in their own backyard and then into others’ by first paying their respects to those owners. In terms of Airlanka/Sri Lankan Airlines I am one of the owners and to date – Mr. Weliamuna has sent only one response as follows:

Obviously, my article with our Indigenous Sports leader Ms Kathy Freeman carrying her Aboriginal flag  during Olympics, was rubbish to Mr. Weliamuna. This happened on 24 June 2015.  Within 6 months Mr. Weliamuna’s karma returned to him through the report dated 11 December 2015 and headed  ‘SriLankan chairman dumps Weliamuna report into dustbin!’

Kathy Freeman was confirming her Indigenous ownership in Australia. We Australians now pay tribute to Indigenous rights on the basis of how they used this Land which is now common to all of us. That is how our ancestral debt is settled and we invoke the Natural Forces of Protection.  True owners are always protected. Those who work mainly for money need to first pay their respects to the true owners of a family/institution/nation for their work to be of value to that institution. Otherwise it is a question of easy come easy go.

If majority current  employees of Sri Lankan airlines pay their respects to those who helped them derive value – the National Carrier will resurrect itself and provide outstanding service – even if it just breaks-even.  In terms of Human values Sri Lanka has stronger capability than Singapore, due to Tamils feeling and confirming their Common ownership through continuous claims of Equal Rights, despite being a minority race. In terms of money values it is the other way around.
Posted by Austms at 13:15