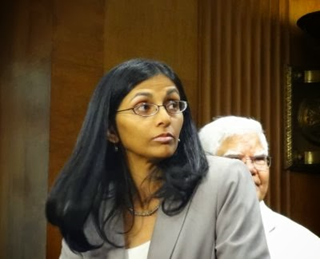 I thought of Pushpa – my husband’s university colleague Santhiragasan’s wife – when I was making string hoppers this morning. These days, most ladies of my age even in Vaddukoddai buy string-hoppers rather than make them. I like to make them myself and often I recall Pushpa whose dedication to home-cooking and especially making string-hoppers was/is inspirational. Likewise, when I make cakes I often thank my Aunt Pathma from my heart. Such seeking is like getting their blessings. In both instances even though they are both clever at such cooking it’s not the technical skills that inspire me. It’s more their dedication to making them for the family. Attributing credit to them makes me feel good and hence I appreciate more and more the value of attributing credit to those who taught me and more importantly  those from whom I learned. I now realize that this is ‘shared’ ownership which motivates us to work just to feel the experience.
Just yesterday, in response to Mr. Malinda Seneviratne’s invitation I read his write up on the visit to Sri Lanka, of Ms Nisha Biswal, Assistant Secretary of State for South and Central Asian Affairs in the United States Department of State. The message from Mr. Seneviratne read:
"Do you think that we think if Sri Lanka cures itself of all its ills you will get off our national back? No. We have no illusions. Say your piece, by all means but spare us the lectures".
http://malindawords.blogspot.com/2014/02/a-briefing-note-for-nisha-biswal.html
That sounded very much like former President of Sri Lanka speaking through Mr. Seneviratne about whom Wikipedia states:

‘Malinda's father Gamini Seneviratne was a civil servant while his mother Lakshmi was a teacher in Royal College, Colombo. Malinda attended the same school and in 1983 selected for University of Peradeniya in Arts stream. While studying at the University, Malinda was offered a scholarship from Harvard University USA in sociology. He graduated in 1993 and enrolled in Cornell University to do the post graduate studies.’

I therefore conclude that in terms of Higher Education – Mr. Seneviratne owed USA. One who has settled the guru-debt would have not lost the wisdom of his guru in global governance. In preparing for the upcoming Testamentary case in Northern Sri Lanka, I wrote as follows – as part of our side submission:

It is submitted that the status of the Deceased is a higher wealth than the money he had custody of . Equal share amongst all siblings is in breach of the hierarchical pathway through which males carry common family status. The children of the sisters have the right and the responsibility to carry their fathers’ lineage with sons doing so even after their marriage. Administrative rights is one way of confirming as to who carries this status developed and held by the Deceased at its highest. It also motivates the younger generation to pay their Pithur Kadan/Ancestral Debt.’

I fully believe that the LTTE (Liberation Tigers of Tamil Eelam) failed to pay its ancestral debt to Tamil political elders and hence limited itself to the credits it earned from the People – especially the young and the active -  to lead them. I on the other hand, attribute credit and own an issue before I make decisions on behalf of the whole. That’s the kind of grooming I have received from parents – not only my parents but all parents in the cultural structure that supported me – especially in education and homemaking. Now I realize that there is a strange and wonderful connection between this and my home-ownership. I ended up inheriting the temple in Northern Sri Lanka taken care of  by my paternal grandmother who was / is my mentor. Under normal circumstances, I would not have inherited the common owner title. Then there is the land in Colombo – which happened to be owned by my Accounting guru – Mr. A.T.Benedict. Then the property here in Coogee, Australia – a property owned by Prima where I worked before joining Airlanka. In terms of both home-properties I bought I had just enough money. But I had deep investment in home-ownership – strong enough to last beyond the seas and beyond time. Like with my employment – in neither case was there any direct connection with the previous owners. I now realize with deep appreciation – that to the extent I accumulated ownership values either by working more than I was paid relative to others in the institution / family and/or paid my respects to custodians of the structure that supported me – I inherited the value of their work. When we lose consciousness of/transcend  the outer forms of this inheritance – we carry the value as Energy through the system of Nature and this helps us have the higher experience as and when we so seek. Hence in my case – educational and workplace as well as home ownership feelings came with me from one place to another and from one period to another. Like virtual reality – all those who helped me get there, help me have the experience in common.

Those who rely on themselves only tend to lose this motivational energy and hence tend to show more and experience less. I fully believe that this is the reason why Sri Lankan Government failed and the Indian Government succeeded after British left. Gandhi paid his respects to the British – through the punishments he accepted. Gandhi did not judge them as individuals but through their own laws in Common and marked himself a ‘failure’ through their laws and rules. For himself he used his Truth and maintained his dignity. He was the example they followed.

When the British left Sri Lanka – Sinhalese as majority race laid claim to Governance as per the rules of Democracy. But the British, the Dutch and the Portugese were minorities ruling majority in Sri Lanka. One needed strong Administration towards this.

The way a member of majority applies the law would be different to the way a member of minority applies that same law. Application is fundamentally driven by our motivational forces – commonly known as ownership forces. Even within a family a junior usually has to fight harder than a senior for Governing status. That is reality – due to seniors having the responsibility to provide service and juniors enjoying as beneficiaries. One who has status usually tends to use authority as a weapon to get the job done or to show that it has been done. But unless s/he attributed credit to those from whom s/he inherited the position status – s/he loses the value of ancestral blessings / energy. Had the heirs to the Sri Lankan throne paid their respects to the colonial rulers also – they would have inherited the Administrative wisdom of colonial rulers in governing Sri Lanka as a whole.

But ‘Sinhalese only’ Nationalists - often skipped that part of our Common ancestry and activated the kings before them. Likewise ‘Tamil only’ Nationalists. Neither side has had a political leader who renounced as Gandhi did to consolidate the sovereign forces of ordinary citizens – especially those who had little or no knowledge of the Common Law. As per Hindu legends Ramayanam and Mahabharatham – ruling families often had to renounce personal pleasures to raise their thinking to the higher level and be answerable to all. Towards this they needed to place the Nation’s interests before theirs. Majority Sinhalese leaders in government failed to inherit the Colonial wisdom of minorities – and therefore were limited to their own strengths. The tendency with such persons is to not have someone above them – representing their ancestral structure. By ‘showing’ Sinhala-only, Tamil-only and White-only – these leaders  lost the true governance power of the mothers (males included) of their nations – who feel first and think later. A member of minority who ‘feels’ a place is her/his home – has natural governing power. Where the pathway was feel first think later – that person has mother’s intuitive powers. If a foreign pathway is enforced on such a person – the imposer loses governance value and shrinks her/his kingdom. That is the law of nature.

Had Mr. Rajapaksa paid his debt to those who developed that ruling seat – whatever its name may be -  he would not have opposed international monitoring missions during the war. The message from Mr. Seneviratne to Ms Biswal ‘to say her piece and spare his group her lectures’ shows poor grooming and the Rajapaksa genes. Large families / races that are not committed to higher common pathways tend to ‘grow’ instead of being ‘groomed’. Families that are groomed through the higher pathways would place family/ community/nation before self. Had Mr. Seneviratne paid his dues to the USA – he would have ‘included’ the strengths of American wisdom as his. If like Gandhi – he sought to be driven by Truth – he needs to renounce any status from his American education – before he treats a fellow American leader as if s/he was below himself and ‘tells’ her what s/he should or should not do. Such ‘telling’ embarrasses all of us to whom Sri Lanka is home – including through our inheritance from colonial rulers.

As I said recently to a Vaddukoddai person – ‘If you are not ready to share your Muthusum/Heritage with a person – treat him as an Equal and that means you do not take any authority over him even to advise.’

I learnt this beautiful lesson from our Thesawalamai ancestors who practiced Gender based Equality long before any Common Law came into force in Northern Sri Lanka. Even one person of Northern Sri Lanka truly believing in our ancestors who gave us Thesawalamai Customary Law would empower self-governance entitlement of  Northern Sri Lankans – whatever their race or religion. Anyone including Tamils - claiming ruling rights need to bow to those ancestors before taking their positions as rulers. That is the Pithur Kadan that needs to be paid to inherit their ownership  Energy. All others are foreigners – even if they are Tamils. The Dutch respected Customary Laws and hence Equality between cultures – enough to codify customary laws. Sinhalese failed due to their desire to rule the whole.

I believe that by being a hardworking home-owning Australian living in Coogee which was originally an Aboriginal habitat and paying my wholehearted respects to Aborigines who were ousted by those who sought pleasures above home-values – I add to the safety of Coogee. Given that I became global by foregoing earned Australian status to uphold my Truth – I add to our Global safety. Every true owner has the power to invoke natural powers of protection – each as per her/his ‘inclusiveness’ of other cultures. Ms Biswal representing  such common structure and grooming  needs to be respected as having earned higher status than those who just grew,  using majority status.