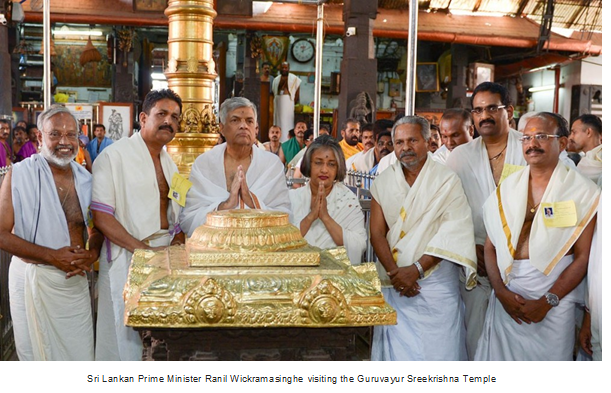 Over the past few weeks, we experienced the saying ‘Old Habits Die Hard’ sadly through the President of Sri Lanka. When I read that the President had announced  that ‘he would appoint the next Governor of Central Bank’   I saw the Political phantom in the President rising to  interfere with the Administrative functions of the Minister for Finance and the Prime Minister. In Hinduism we call it ‘attachment’ to benefits. Such attachments become downward pulling forces beyond the ‘use-by’ dates of costs and/or benefits.

An Administrator overrides such attachments by bringing to her/his mind – the Costs at the same time s/he recognizes Benefits. A Governor that the President is being made out to be through Constitutional Amendments – needs to rise above that intellectual pathway also to make the connection between Cause and Effect – as if both are within her/him. Mr. Sirisena may occupy that Governing position. But the real empowerment comes from those who have that higher experience. Their Energies connect to the players often without being visible to those observing or being known to the players themselves.

I started making this connection here in Australia when I accepted the ‘defeats’ allocated to me by the Executive as well as the Judiciary. Since I believe/d in Lord Krishna – I was able to work out that this acceptance meant that I was the Judge as well as the one being Judged. Hence I realized that by accepting the ‘defeat’ after escalating the problem as I saw it – to the highest level through Due Process – I became an owner and that my discoveries were the foundation stones for the new policies needed to be practiced by Australians to release ourselves from our sin of Terra Nullius as per our convenience. To the extent Mr. Howard played the political game he had the 9/11 and Bali Bombing happening during his rule. I filled that part of the position that he vacated. Hence I established through Court action that I was his Equal Opposition.

Today is Federal Election day for us Australians. My vote would be for the member in particular if I were local in my mind. Given that mine is National I would vote for the one that represents Turnbull-Abbott coalition . I identify with  Mr. Turnbull for Administrative values and Mr. Abbott for Political faith as Australians. That kind of identification happens through Truth.

Hence when I read this morning the adaderana.lk news that ‘The new Central Bank Governor will be appointed only after the Finance Minister Ravi Karunanayake returns to the country’ I felt that my following message through my article ‘King Wicki & the Political Phantom’
had reached home:

‘The President is entitled to make such decision for his electorate and/or his profession/portfolio  but not beyond. In this instance such Political right is allocated to the Minister concerned. Within the Institution that right belongs to the Governor who has made the right decision to suspend himself until the Parliamentary Inquiry is completed.’

The dignity of a person comes from the credits allocated by her/himself through her/his Truth. If we are therefore more ‘right’ than ‘wrong’ as per the system we have invested in – we contribute to harmony in an environment where that system is respected and valued. We may seem wrong to others using a different system but so long as we stay within the area covered by our system we would be untouched by those other markers/examiners.

It is in appreciation of this reality that I refrain from ‘judging’ the folks of Thunaivi in Northern Sri Lanka – expect where they are part of the Institutional structure that has developed under my leadership. I reside with them and in areas outside our home compound, I make the connection to the outcomes they produce through their own causal forces which are different to mine. That way I preserve my moral values from being attacked by theirs.

In his Colombo Telegraph article ‘An Anatomy of Arrogance’ Mr. Sarath de Alwis states:
[It is doubtful that our Prime Minister Mr. Ranil Wickremesinghe has read Leon Trotsky. However, I think the Constitutional Scholar and member of Parliament Mr. Jayampathy Wickramaratne PC has read Trotsky who famously said that the “depth and strength of human character are defined by its moral reserves”.]

This expresses approval of Hybrid Court. Mr. Wicremesinghe  would not need to read Leon Triotsky to identify with this wisdom.  Buddha’s teachings alone would do.  In the subject matter which invoked this article – the Power to appoint Central Bank Governor – Mr. Ranil Wickremesinghe has demonstrated deeper moral values than Mr. Sirisena. The author Mr. Sarath de Alwis reveals the skeletons in his own cupboard as follows:

[In those idyllic times of hope in January 2015, I remember calling Mr. Wickramaratne to express my utter alarm, dread, shock and consternation on learning that Mr. Arjun Mahendran was to be appointed Governor of the Central Bank. They were times when Mr. Wickramaratne answered the phone and was ready for a casual conversation with an old acquaintance from the days when we both frequented the Chithra Lane home of the late Hector Abhayavardhana.
He said he did not know about Mr. Arjun Mahendran. I told him that I did not know much about him either. But I said that he was the father in law of Arjun Aloysius the young heir of the House of Aloysius a pivotal player in the Central Bank firmament under Governor Ajith Nivard Cabraal. I thought that the appointment would compromise the new Presidency. Since the interim UNP administration was dependent more on the President, I felt that he could be persuaded to turn down the nomination.]

To my mind, the above is also political interference through the backdoor. Every Governor has the right to contribute to governance. The base of such governance is one’s moral values. One who does not have direct influence as part of an official Administrative system has the responsibility to express her/his opinion as a person  Independent of that official system. The moment we expressly influence an official we are guilty of bribery. Mr. Sarath de Alwis is confessing to being guilty of bribery. Mr. Sarath de Alwis is relating to a member of his group – Mr. Arjun Aloysius who is alleged to have used ‘insider’ information to profit from the bonds issue. If Mr. Arjun Aloysius is guilty of ‘insider trading’ then so is Mr. Sarath de Alwis who was also trying to use ‘insiders’ in the appointment of Governor of Central Bank. So long as Sinhala leaders deny the charge of racial discrimination – they carry the risk of polluting the Administrative system – often through ‘insider-influence’ that they accuse the Central Bank Governor of. The question is what authority does a Sinhala leader have, to subjectively criticize a Tamil, over whom the Sinhalese leader as no moral authority under an ethnically divided Sri Lanka? – as measured by those who have credit points as higher investors in the system of Equal Opportunity?

To relate vertically within the same system, one must have ‘insider’ faith – which Mr. Wickremesinghe has demonstrated he had/s in Mr. Mahendran – a Tamil who has demonstrated experience in Financial leaderhip. That appointment was a major stride in Reconciliation achievements including in the minds of Singaporeans and Malaysians who have strong influence over Sri Lankan Tamils as well as Indian Tamils. Many of us felt that we were honored by that appointment. That went towards healing  the wounds of our losses through unjust discrimination by use of Political influence where Administrative Discrimination was needed. Thus far Mr. Mahendran has revealed that he has enough moral strength to derive value from holding that position.

A leader of  ethnically divided Sri Lanka has no moral authority to accuse or reward a member of another ethnic community until there is Objectively measurable evidence of wrong doing as per the rules governing that position. Only a leader who has demonstrated contribution to bridging that gap to become Higher Sri Lankan – has the authority to judge ‘internally’ on behalf of Sri Lanka. That is Mr. Wickremesighe and not Mr. Sirisena who was part of the old regime. Hence Mr. Sirisena did not have the moral authority to demote Mr. Mahendran’s status outside Due Process.

Sri Lankan Public Service will take a long time to effectively accommodate Democracy in Administration. To my mind, if the Auditor General of Sri Lanka is more advanced than the Auditor General of NSW, Australia, whom I successfully challenged,  he would have identified with my wisdom in separation of powers between Management and Audit which is often difficult in organizations that are not-for-profit and use internal authority to exercise power, instead of separation by producing objectively measurable outcomes.

One who does have strong moral values in multicultural governance would identify with the threats made by Americans and the UN  during this period. Mr. Mahendran through his natural values has stronger natural membership with that group than does Mr. Sirisena and worse Mr. Sarath de Alwis. Every lay-reporter  who writes publicly must stay within her/his Truth  when showing the connection between cause and effect. One who is able to identify with this connection confirms freedom from costs and benefits as well as rights and wrongs. Above that all we do is group ourselves with our Natural families / communities and enjoy peace and happiness.
Posted by Austms at 13:20