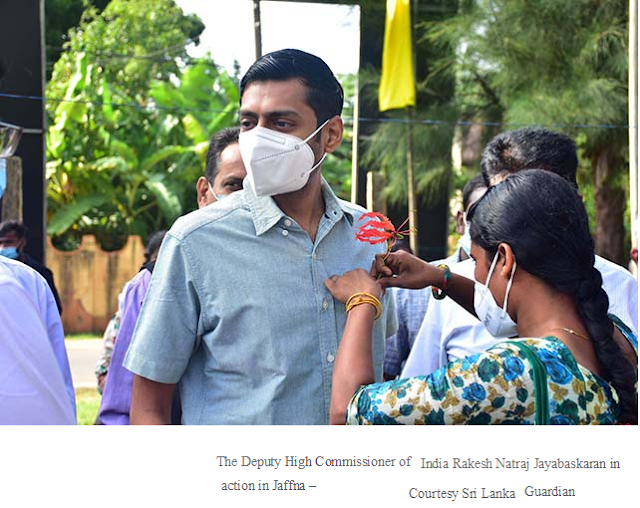 Is Death good or bad? It could be good in the case of those who seek relief or could help us eternalize the virtues of a person. It is better for the environment when we die as heroes than when we are zeroes in old age.

As per the Sri Lanka Guardian Editorial ‘Sri Lanka: Is India Scheming for LTTE Revival’:

[The Kittu Memorial Park in Nallur was opened in 1994 in honour of Sathasivam Krishnakumar commonly known by the nom de guerre Colonel Kittu, a senior member of the LTTE who was besieged by Indian Navy warships in 1993 and committed suicide along with nine other members. A number of activities are being carried out at the park, including the planting of trees as a tribute to the slain LTTE terrorists. Accordingly, the sole purpose of this park is to commemorate the LTTE terrorists.

Jayabaskaran is an Indian diplomat. Could it be a coincidence that he was the chief guest at a memorial service for the LTTE terrorists responsible for the deaths of so many Indians, including the former Prime Minister of India? Two main points can be made here. First, Jayabaskaran, a diplomat representing the Indian government, has violated the diplomatic ethics of his position and the protocols in the Vienna Convention on Diplomatic Relations by being the chief guest at a memorial service for members of a terrorist organization banned by his country. Second, the ruling Indian government may have changed its position and allowed its diplomats to participate in such activities to promote terror ideologies. Both of these issues are incredibly serious when it comes to Indo-Sri Lankan diplomatic relationship.]

The two questions I ask in return is –

1.     What  measure has the Sri Lanka Guardian used to list the  LTTE as a Terrorist?

2.     Has the Sri Lanka Guardian used the same measure to the Sri Lankan armed forces – as per the effects they produced during the war?

Mr Shekhar Gupta, the Editor-in-Chief of the Indian Express wrote in his tribute ‘Courage Amidst Hatred’ in honour of Dr Neelan Thiruchelvam -  on August 1, 1999.

[In April 1993, a gunman got Lalith, an assassination Premadasa's police blamed on the LTTE, picked up a young Tamil suspect who, it was said, died while trying to escape. A commission later pointed the finger at Premadasa. Just eight days later, Premadasa, too, joined the man he hated so much as a Tamil human bomb blew him up at a May Day rally. Gamini, the new claimant for Jayewardene's legacy, survived another year and was then, almost inevitably  shot and bombed by the LTTE at an election meeting.

I must underline that the LTTE is not solely responsible for this devastation on my first Sri Lanka notebook. Lalith was probably killed by Premadasa's vigilantes. Vijaya Kumaratunge, Chandrika's filmstar and peacenik husband, who was described as the Amitabh Bachchan of Sri Lanka and whom every visiting Indian hack approached for that one conciliatory Sinhala quote, was done in by the ultra-left JVP that saw him as a threat, particularly as the left moderates loved him.]

The above confirms that Sinhalese Politicians also targeted each other – meaning that the war was not due to ethnic differences. Majority wanted an emotional reason to fight.

We no longer have a common measure applicable to both sides on equal footing when something seems to go wrong. But in Truth our conscience would tell us whether a person was right or wrong.

[‘doctrine is divine , while religion is human’]

In turn, I used the essence of this to respond as follows to ‘Selfishness defines human behaviour’:

Commonness is the basis of Divinity

Appreciating the need to use Common measures is the key to education through the media. One may report ‘what happened’ impartially and leave it to the People to interpret as per their own mind structures.  If on the other hand, one is to ‘judge’ and advocate, one needs to use Lowest Common measure.

In the case of Kittu – after whom the memorial park in Nallur has been named – the measure used is Militant measure. Following indicates his karma:

[LTTE member Seelan (Charles Lucas Anthony), a close associate of Prabhakaran, was killed in a confrontation with the Sri Lanka Army in Meesalai on 15 July 1983. On 20 July 1983 the Sri Lankan government banned all reporting about the LTTE.  In response, the LTTE planned to ambush an army military convoy.  On 23 July 1983, at around 11.30 pm, the LTTE ambushed the Four Four Bravo military patrol in Thirunelveli near Jaffna.[6] Thirteen soldiers were killed on the spot, two died later and a number of LTTE cadres were also killed. LTTE members involved in the ambush included Prabhakaran, Kittu, Appaiah, Chellakili, Iyer, Pulendran, Santos and Victor.  The ambush precipitated the Black July anti-Tamil riots in which between 400 and 3,000 Tamils were killed by Sinhalese mobs]

As per Dharma, those who become heirs of Kittu would be ready to die in combat – towards which they would invoke fights.

Yesterday, I wrote as follows in terms of  Karthigai flower  which was the flower pinned in memory of the LTTE.

[Yesterday, in response to my article about the Karthigai flower – a scientist advised me that it was poisonous. My search advised me that it was also suicidal. The signature in the above display confirms some heirs of child-soldiers reborn in the UK. It’s a free world where we do get what we work for. Those who yearn for hunter heritage would get child soldiers. That is the way with polarisation through emotions. Then they have no right to show empathy with crying mothers. When one seeks on the basis of belief one would narrow the gap between cost and benefit and take the middle path. Likewise in terms of intellectual discrimination.]

I wrote also how I celebrated a Tamil Policeman:

[This morning, I started looking for a small statue of Our Lady – given to me by Sister May Joseph of Holy Family Convent – Jaffna. That brought to me thoughts of Damayanthi – the sister of Policeman Bastiampillai who also studied at the Convent and who married a relative of mine. I prayed for his soul so Vaddukoddai would get more and more Policemen who would serve the Common Government of Sri Lanka. ]

If both are based on belief – mine would work for me in a structure where education is at the top of the hierarchy. In the case  of those who celebrated the militants – military would be at the top of the hierarchy. The two would be granted as per our respective beliefs but we would also be separated internally. Those who asked for separation and would get separation. Those who sought commonness would get commonness.

It is important that we have separate Administrative structures so that one does not interfere with the other, but would oppose the other.

Likewise India in Sri Lanka which after China in Sri Lanka would promote LTTE. That is the way Divine Dharma works. This effectively brings about Equal Opportunity structures.  This diplomat may prefer to die for India and hence the above move in a country where inquiries into political murders and terrorist attacks are rarely investigated through Common pathways. As a Common Hindu he would consider it an opportunity to die for the region.