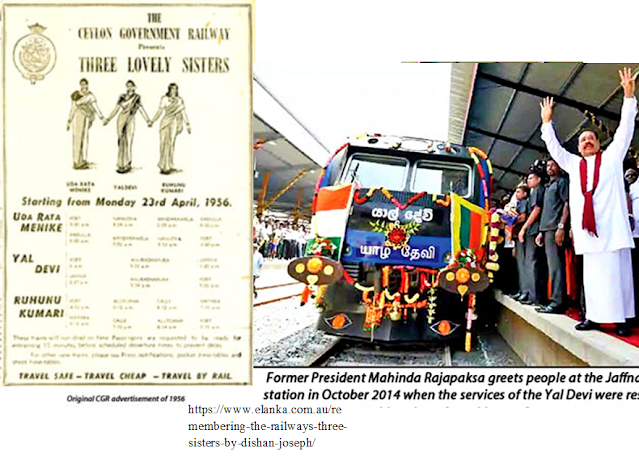 I met Raj at the Sri Lanka Reconciliation Forum, Sydney. The written rules of that group were of global standards. But the Energy in that forum was not enough to ‘keep’ me active. Now I am a passive member, very like the Tamil Diaspora of Sri Lankan origin in whom Raj seems to be interested. This seems to be the essence of his article headed: North east economic engagement could change SL political dynamics - A message for Tamil diaspora’

Raj told me occasionally that he did read my articles. Once in a blue moon he discussed  the ethnic issue with me. I did not feel that Raj had me in his consciousness. Dr Gamani Goonetilleka of the same forum seems to carry me in his consciousness as a Sri Lankan and chose me to read the President’s message at a Sri Lankan event : http://www.austms.org/news_and_events/Lanka_malasa_March_2014.pdf

Neither Gamani nor I needed political grouping to recognize each other. Gamani often expresses appreciation for the core messages in my articles. The beauty of ‘Thank you / appreciation’ is that it completes service and lifts the Energy to Common level from which both sides draw. That is an everlasting Energy that which naturally supports all seekers of ethnic Peace. This is a sure Heritage that both of us share with future Sri Lankans.

‘Global Tamil Forum Spokesperson Suren Surendiran has said that there is more the Tamil diaspora can do for Sri Lanka; this is true and it is a positive sign that greater political engagement might be in the offing .’

That would be the parallel of Rajapaksa-Nadesan friendship which has led to the Pandora papers scandal.

[It is widely reported in the media that some young persons in the north and east are also engaged in the drug trade and/or have become addicts, and have become serious alcohol consumers using funds sent to them from overseas sources. This is not confirmed and it is not clear or established what these sources are, if indeed it is the case. If true, these developments are manifestations of frustration felt by many young persons in the north and the east, and it could well lead to developments that the region, and the country, would not wish to experience ever again. In this regard, anyone who has the welfare of the people of the north and the east in mind should consider fresh strategies that would help the people living there and not leave them where they are now, and have been for a long time.]

The saying that comes to mind when reading the latter paragraph is the Tamil saying – that the wolf is crying because the goat is getting wet !

In Northern Sri Lanka, I live in the toddy tapper village of Thunaivi where intoxicants are like wine to Christians. The way I believe I contribute to their moderation is through common faith in our temple where they have to follow my rules or go elsewhere. Through this common faith – I believe I have considerably reduced illegal emigration from that area and we continue to actively promote investment in education. Except for a few the rest accept and follow due processes.

The purpose of Common Law is to bring these minds together with the blessings of those who gave us those laws. I doubt that Global Tamil Forum Spokesperson Suren Surendiran has these elders in his consciousness. There are young ones who have strongly demonstrated this commonness with our common elders. Dishan Joseph is one of them. When I read his article ‘Remembering the Railway’s Three Sisters  ’ I first thought of Uncle Vaithilingam who said to me that he did not know Sinhalese but that he identified with the emotions of the workers and that when they cried he also cried. I concluded from the Three Sisters picture that his uniting spirit as GM of Railways also contributed to this everlasting heritage.

I recalled my feelings when the Northern Sister – Yarl Devi was resurrected by then President Mr Mahinda Rajapaksa in 2014. There is no mistaking the feelings he demonstrated then as if it was his baby. The current three sisters in law are the Kandyan Law-Thesawalamai-Muslim law. The Common mother – is English law just like the Railway system is part of our British heritage.

As for Raj – my advice is look within and become the best Sinhala Diaspora leader that you can. Then you will intuitively know the genuine Tamil Diaspora leader of your standards. That is all we need.