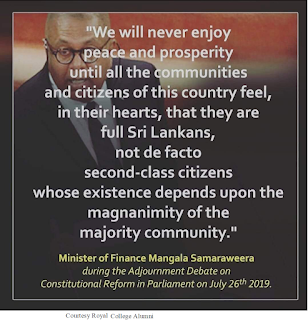 Tamil Equality in Sri Lanka, in the language of  Saint Yoga Swamy is ‘Eppavoh Mudintha Kaariyam’ / ‘Matter Completed long ago’. It was achieved through the intervention of India at the request of then President – J R Jayawardene. Yet not many of us appreciate its significance – probably due to wanting some kind of separate identity instead of the Higher Common status.  The Senior member of Australian Tamil community who forwarded the above message from the Royal College Alumni, sent also the following about which I had very little knowledge:

[Politicians are politicians. One must not forget when Sinhala Only Bill was presented in Parliament, Dr N M Perera and the 14 members of the LSSP opposed the bill, walked out of Parliament in protest , during the debate  commenced his speech by saying we are first all Ceylonese before we are Sinhalese or Tamil, Dr Colvin said two languages one Nation , one language Two Nations. ]