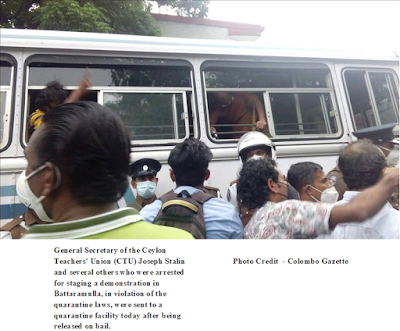 THAT IS AUSTRALIA; THIS IS SRI LANKA

When we complete our work to our satisfaction and we did the work without any expectation of money or status benefits – that work strengthens our belief in the issue. We then become government or Opposition in that issue within our home environment. My sharing yesterday, through my article ‘Health Silk Road or Pandemic Silk Road?’ brought me such a feeling of completion. This morning when I learnt that eLanka has published it, I naturally included them in my ‘home environment’ . Likewise, the ‘Morning Lanka’ which published the article ‘The right to protest and the fight against Covid’. I wrote in my article :

[Then I thought about the protestors. Do they have the right to oppose and if yes, how is that right earned? The response from within  said that belief in that issue in another form is essential to accumulate that ‘right’. To my mind, it is on this basis that the opposition in parliament is rendered the right to oppose. Hence, where our belief is stronger than that of the person of authority and we are not facilitated to officially demonstrate that opposition, we have the right to expressly oppose. When we do so through the structured pathway, the returns happen through that pathway. Hence in an environment where there is no officer – we are entitled to make citizen’s arrest as per our Common law. Citizens who protest without belief are not entitled to do so.]

Hence when I read the Morning Lanka article I felt that I had connected to their mind yesterday itself. That confirms my right to publicly endorse or oppose their published work. Whenever we ‘publish’ we need that ‘right’ even to endorse. The issue presented by Morning Lanka is indicated by the following:

[Prominent private and unofficial bar lawyers association, the Bar Association of Sri Lanka (BASL), in a letter addressed to Director General of Health Services (DGHS) Dr. Asela Gunawardena and Inspector General of Police (IGP) Chandana D. Wickramaratne in this connection, said the quarantine regulations should not be misused to deal with the people exercising their constitutionally guaranteed rights.

As a lay Australian, yesterday when our Prime Minister – Mr Scott Morrison made promises of support to NSW – I expressed the feeling that he set the wrong example by travelling to London for the G7 meeting.  https://www.abc.net.au/news/2021-06-21/scott-morrison-visits-while-in-uk/100229960 . To me, a caring Prime Minister would have shared in our pain during this difficult period by staying at home with us – as one of us. Hence his authority to endorse the NSW lockdown is weak.

The parallel of that in the case of Bar Association is their right to protest on the basis of Constitutional provisions. I wrote to them many times and most recently on 28 March 2021. The letter was addressed to Mr Visvalingam Thirukkumaran – the Jaffna representative of the Bar Association:

[I write to complain against two members of the Bar Association of Sri Lanka, for their failure to deliver service as required in relation to the following matter:

Administration of the Intestate Estate of

My complaint is against :

2.     Mr Visvalingam Manivannan – who represented my husband and I in the Appellate Court

The letters in Appendix confirm the details of the above matter and provide the reasons why I am complaining.

Our repeated attempts to obtain the Certificate of Heirship have failed. In the meantime, Mrs Sabanathan, who was also represented by Mr Yogendra,  has sent my husband some money but has failed to provide details.

Our calls to Mr Visvalingam Manivannan are not being taken by Mr Manivannan. I am writing to you specifically as on one occasion you represented your brother when he was busy in Geneva. This is our parallel of the Missing Persons’ cases that have been escalated to the UNHRC level. ]

There was no response from the Bar Association. It is when complaints are not heard that genuine complainants accumulate their right to protest as per the institutional values they / we respected. This is often confirmed by their heightened  intelligence in the issue. The Constitution is the Balance Sheet of all those who invested in the ownership of the nation - as perceived by politicians. It has to be balanced and should not be reopened for conversion to current benefits. To a believer who respects this ancestral value,  the return is Universal support – starting with wisdom in the issue.

As per my knowledge – the Bar Association of Sri Lanka has not protested against article 9 of the Sri Lankan Constitution which states:

[The Republic of Sri Lanka shall give to Buddhism the foremost place and accordingly it shall be the duty of the State to protect and foster the Buddha Sasana, while assuring to all religions the rights granted by Articles 10 and 14(1)(e)]

Any Buddhist signatory to the above mentioned letter to the ‘Director General of Health Services (DGHS) Dr. Asela Gunawardena and Inspector General of Police (IGP) Chandana D. Wickramaratne’ has the duty to use Buddha Sasana / Buddhist scripture and if the officers mentioned are Buddhists they also have the duty to use Buddha Sasana. Only Non-Buddhists have the rights specified in articles 14(1)(a), 14(1)(b), and 14(1)(c), respectively, of the Constitution which state as follows.

[Every citizen is entitled to –

(a) the freedom of speech and expression including publication;

(b) the freedom of peaceful assembly;

(c) the freedom of association;

Freedom is an entitlement of an independent person. Such a person is Sovereign and hence is free to express and act. If a sovereign body is divided laterally – each part would be equal in ownership power/ energy  to the other. Hence article 9 divides the nation as Buddhists in Government and non-Buddhists in Opposition. Due to the word ‘foremost’ and the command to ‘protect Buddha Sasana’ Buddhists do not have the ‘freedom’ to Oppose and therefore to Protest.  If they feel cheated – they have to submit to Lord Buddha directly or through their government. Then Dharma takes care of the issue. The do not have the right to laterally subdivide into Equal parts but merge vertically through foremost/senior person. That is the way of China’s government.

As per Colombo Telegraph report ‘Lawyers Slam “Disgraceful” Conduct By Additional Magistrate After She Lambasts “Honking Protestor” In Open Court’:

[“Don’t try to be macho,” Additional Magistrate Jayasuriya chastised the arrested protestor. “Just behaving like lunatics at every turn,” she added. When the arrested man’s lawyers informed the court that he had recently returned from studying in Australia. The lawyers told the court that even when the Australian Prime Minister travels, these kinds of road restrictions were not imposed.

To which the Additional Magistrate retorted: “That is in Australia. This is Sri Lanka. If you do not love this country don’t come back. Stay in Australia”….

The VVIP convoy was eventually revealed to be the motorcade of the visiting Chinese Defence Minister. ]

As per the research paper headed Chinese Defence Minister’s Visit to Sri Lanka: A New Dynamic to Bilateral Ties’ published by The Institute of South Asian Studies (ISAS) - an autonomous research institute at the National University of Singapore (NUS):

[China’s arms trade with Sri Lanka between 2000 and 2008 was US$271 million (S$362.15 million). This has contributed immensely to the military victory over the Liberation Tigers of Tamil Eelam (LTTE).

Additionally, the ongoing border tension between China and India, and New Delhi’s active engagement in the Quad have changed the geopolitics in the South Asian and Indian Ocean region, signalling unavoidable militarisation. Against this backdrop, China is on a mission to establish military ties with India’s neighbours like Nepal and Bangladesh and consolidate existing relations with Pakistan. Accordingly, apart from the geopolitical significance, which has gained extensive attention, General Wei’s visit reflects China’s interest in adding a military dimension to its growing ties with Sri Lanka.]

As per the Morning Lanka report:

[On Sunday (11), CTU General Secretary Stalin told The Morning that his fellow protestors and himself had not been provided clothing or proper food at Sri Lanka Navy’s Mullaitivu camp, where they are undergoing quarantine.

“Minister Sarath Weerasekara said in Parliament that the people who were sent to quarantine were sent according to proper health recommendations. Those were lies! How could they make a health recommendation without even having been checked by a PHI? We were given toothpaste by a monk. We were not given any clothes. These people had to wear bed sheets since morning. The Police said everything they need is in the quarantine centre,” he said.]

Minister Sarath Weerasekara being a Buddhist has no jurisdiction to travel along the secular pathway.

As a true Sri Lankan I note that within a month of the above visit – the ‘Colombo Port City Economic Commission Act’ was enacted by the current government. That confirms to me the purpose of that visit and also – the price of Victory claims that this government has to pay for ‘winning’ against its own Tamil citizens.

In Australia, majority Oppose ‘being told’. In Sri Lanka,  the Constitution itself empowers the government to ‘tell’ Buddhists. Sri Lankan Buddhists who seek ‘freedom’ through Constitution – need to migrate to nations like Australia where one can make a law or protest in opposition but not tell.