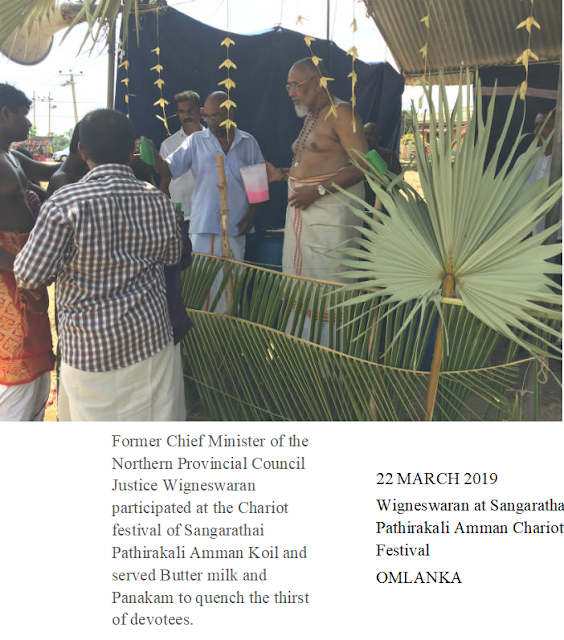 As per my interpretation, the essence of the above is [Eela Tamils expect India’s Central Government to obtain Restorative justice for all Tamils who fought for justice denied. Also,  obtain long term solution and  peace ]

The above is reported to have been stated by TELO’s youth wing leader. As per Wikipedia, Restorative justice is

[...a process where all stakeholders affected by an injustice have an opportunity to discuss how they have been affected by the injustice and to decide what should be done to repair the harm. With crime, restorative justice is about the idea that because crime hurts, justice should heal. It follows that conversations with those who have been hurt and with those who have inflicted the harm must be central to the process.]

As per published information, TELO:

[ The Tamil Eelam Liberation Organization (TELO) is an Eelam Tamil organisation campaigning for the establishment of an independent Tamil Eelam in the northeast of Sri Lanka. The TELO was originally created as a militant group, and functioned as such until 1986, when most of its membership was killed in a conflict with the Liberation Tigers of Tamil Eelam (LTTE). Its surviving members reorganised themselves as a political party, and it continues to function as such today]

Knowing the above makeup of TELO, one is entitled to conclude that they seek Justice from LTTE also. To be true, their feeling of injustice would stem from their own experience. I explained this as follows to a fellow Tamil :

Fellow Tamil:        [Was the war in Srilanka to fight against terrorism or to establish a one country one language one religion in Srilanka as was taught to Sinhala school children through text books in the fifties. “Kadugath Sinhalayo Demalun Mara Lakdiva Eksath kalaha” meaning : the armed Sinhalese killed the Tamils to make the Island one. (The island was not one before)The latter appears to be the truth.]

Gaja:[ Because you say ‘appears’ I conclude that it is NOT your truth. Until 1975 ‘White Australia Policy’ was official racism. But now Australia also leads in global values due to its commitment to Equal Opportunity policy. The old Policy was suitable back then. The parallel for Jaffna Tamils is Caste based discrimination provided for in Thesawalamai Law. By living in Toddy Tapper village of ‘Thunaivi’ I learnt their system of justice. Not one of them would relate to Common law of Sri Lanka. But in the freedom of their isolation, their skills come out. Yesterday, for example, the folks sought my permission for them to take ‘Kaavaddi’ from our temple to Sangarathai Pathirakali Amman temple where the annual festival is taking place. Previously they would have assumed the right but now they have been trained to ‘ask’ when entering private property. I expect their parallels in the Sinhala community to do likewise. ]

Fellow Tamil: [As is evident from the time of independence or before independence every opportunity of resources to establish such a vision of the majority of the Islanders was utilized. Whether it be humanitarian aids received for flood victims, tsunami victims, war victims Etc., or international legislations such as : prevention of terrorism act and now the Covid 19 assistances have been and are being used towards achieving this end. There appears to be no accountability for these. ]

Gaja: [I do not know which country you live in. But here in Australia, I ‘restructured’ the system and live in areas where I am able to uphold the values of globalization as per my contribution and that of my immediate family. I find members of the Tamil community who were ungrateful to the ‘Common’ system in Sri Lanka, tending to exploit the Common Australian system and do the parallel of Thunaivi folks when they are exposed to the parallels of the welfare facilities you have mentioned above. Just yesterday, a Canadian Tamil said that the Sri Lankan bride of his son wanted divorce after coming to Canada – stating that she already had been engaged to another guy. As per my knowledge – the Canadian Tamil lived in Canada as he did in Jaffna or majority Tamil areas. Hence they rejected brides from Multicultural part of Tamil community. Such folks have no moral authority to condemn Sinhalese doing the same in their ethnic areas. Both are accountable to their elders. Only multicultural Tamils are entitled to global judgment. ]

Militants who were / are claiming to fight for  the ‘establishment of an independent Tamil Eelam in the northeast of Sri Lanka’ do not represent us Sri Lankan Tamils. I thought about my own feelings in this regard, and said to my husband who is from Vaddukoddai – that as far as I am concerned – as per the position allocated to me by the Tamil community – the Sri Lankan government has NOT discriminated against me or my family. We were affected by the communal riots but our positive experiences with the Sinhalese community more than make up for the negatives – which happened due to political greed. So far my experience with the Sinhalese at my level has been overwhelmingly positive. This includes officers at the camps in 2009.

TELO’s claim is limited to the group that it represents. This comes within Eelam Tamil description and NOT Sri Lankan Tamil. Sri Lankan Tamil includes Hill country Tamils who for a long time were known as Indian Tamils. These days members of the Tamil community in Australia fight against the repatriation of Tamils who have applied to stay on in Australia. But we do not demonstrate feelings for the injustice to Indian Tamils. Then we have the audacity to expect India to help us.

Eelam Tamils need to clear themselves of their past karma – including against Colombo Tamils who invested in Multiculturalism. Most of them would not return to North or East except to retire. Most British Tamils and Canadian Tamils would do that either.

[political parties in Tamil Nadu are seen campaigning with the images and cut-outs of late Velupillai Prabhakaran, the founder and leader of the Liberation Tigers of Tamil Eelam (LTTE) ahead of the assembly elections, proving that years after his death, Prabhakaran still continues to hold political clout in the state.

Apart from NTK, led by Senthamizhan Seeman -- who is a filmmaker turned politician, Marumalarchi Dravida Munnetra Kazhagam (MDMK) led by Vaiko, who is a Rajya Sabha MP from Tamil Nadu, have also been seen campaigning with a cut out of the late LTTE leader.]

They are the parallels of British to whom the White Australians  are juniors. I am an independent Tamil common to Sri Lanka the whole and Australia.

I conclude with my response to the above mentioned Tamil who asked me:

[What percentage of the Tamils in Srilanka celebrated the victory of the war against the so called terrorists? What do you infer from this?]

My response was : 0% in the Sri Lankan community that I am part of.