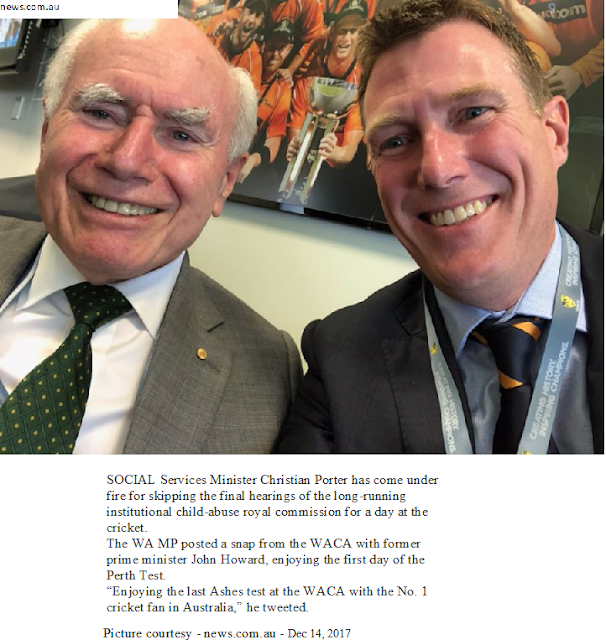 I believe that we are all born sovereign. The ability or inability to protect our sovereignty is built into our karmic code / genes. These make us different to each other. When we preserve the sovereignty of a group, despite such differences, we have earned the right to be respected by those who are yet to form such – sovereign group. Sri Lanka’s internal war is currently before the UNHRC to examine whether this sovereign  status earned by an individual or group was damaged by another. The allegations of rape, against our Attorney General Christian Porter are to my mind, invalid in a Court of Law. But politically the karmic forces seem to have become active. Every Politician is open to this karmic risk carried as a political group.

As per SBS news:

[The New South Wales Police Force says it has closed an investigation into a historical rape allegation against a sitting cabinet minister in the federal government, saying there is “insufficient admissible evidence to proceed”.

The incident is alleged to have occurred in 1988 when the woman was 16.

She went to police in NSW last year, but the investigation was suspended when she took her own life in Adelaide in June 2020 after telling authorities she didn't want to proceed.

It is difficult for me – a woman from Sri Lanka to relate to narratives that indicate strongly that the Australian women have failed to protect their sovereignty – despite the strong investment in law. I conclude at such times that the laws must be excessive and lacking in belief by the makers.

The following was reported by CNN  :

[During the press conference, Porter responded to journalists' questions on the details of the allegation by saying it "just didn't happen."

Porter said he wouldn't be standing down as attorney general, but would be taking "a short period of leave."

"If I stand down from my position ... because of an allegation about something that simply did not happen, then any person in Australia can lose their career, their job, their life's work, based on nothing more than an accusation,"]

That is true only if the law maker/s believed in the relevant laws.

[At the commencement of his role as Attorney-General, Porter called on religious institutions to implement the recommendations of the Royal Commission into Institutional Responses to Child Sexual Abuse]

But the karma he brought in to the position through the issue of the Royal Commission into Institutional Responses to Child Sexual Abuse is in the following report :

[SOCIAL Services Minister Christian Porter has come under fire for skipping the final hearings of the long-running institutional child-abuse royal commission for a day at the cricket.

The WA MP posted a snap from the WACA with former prime minister John Howard, enjoying the first day of the Perth Test.

“Enjoying the last Ashes test at the WACA with the No. 1 cricket fan in Australia,” he tweeted.

But followers didn’t seem to share the grins the two Liberal politicians had in the picture, with dozens slamming the minister for skipping the commission’s seminal closing session.]

Former Governor General of Australia Dr Peter Hollingworth was part of the reason for the above Royal Commission:

[Hollingworth told the Australian media that, as a newly appointed archbishop at the time, he lacked the experience to handle the matter. He also said he had not believed that the case involved sexual abuse, but conceded he had not done enough to stop abuses occurring. Hollingworth subsequently apologised to the Toowoomba victim and released a formal statement condemning child sexual abuse but by February 2002, the Labor Opposition was calling for Hollingworth to be dismissed…… On 28 May 2003, he announced his resignation and his commission as governor-general was revoked as of 29 May 2003…….. In 2015–2016, Hollingworth faced questions as part of the Royal Commission into Institutional Responses to Child Sexual Abuse in regards to his handling of abuse claims while he was Archbishop of Brisbane. He has apologised to victims for not pursuing their claims more rigorously]

Despite the above experience of the Governor General resigning for neglecting his duty to contributing to prevent child abuse, Mr Porter neglected his duty of care to the victims. I do not believe that it was the allegations by the lady that caused this turmoil. It was the negligence of duty that caught up with the Attorney General – the same way it did with the Governor General. Both confirm belief in the current form of Blood Law or Honour killing where Administration and Judiciary have failed the victims.

The Sri Lankan war crimes issue before the UNHRC would end up with similar fate if Administrators and Judiciary neglect their duties. Where decisions are made through influence of ‘Blood connections’ karma would also happen along the same path. As the current Prime Minister of Sri Lanka is reported to have stated in relation to himself as being from the jungles of the South:

More interesting revelation is that the current President joined the Army during the first insurrection in South by JVP and was trained in India’s Counter-Insurgency and Jungle Warfare School:

Rajapaksa joined the Sri Lankan Army as a Cadet Officer on 26 April 1971, when Sri Lanka was still a dominion of the British Commonwealth and was in the midst of the  . Following his basic officer training at the Army Training Centre, Diyatalawa in its 4th intake, he was commissioned as a Second Lieutenant on 26 May 1972, in the Sri Lanka Signals Corps. Soon after he was sent for the signal young officers course at the Military College of Signals, Rawalpindi. On his return, he was assigned as the signals officer to the Task Force Anti Illicit Immigration, based at its headquarters in Palaly, under the command of Colonel Tissa Weeratunga. In April 1974, he was promoted to Lieutenant and in October he transferred to the Sri Lanka Sinha Regiment as an infantry officer. In April 1975, he attended the infantry young officers course at the School of Infantry and Tactics, Queta. Returning in June, he was assigned as the battalion intelligence officer at the Echelon Barracks in Colombo and was promoted to Captain in April 1977. Following the change of government in the 1977 general election, he was transferred to the Army Training Centre, Diyatalawa as an officer instructor in August 1977. In January 1978, he was appointed Grade III Staff Officer of A branch, handling administration of the Diyatalawa Garrison. During this time he attended the senior staff and tactics course at the Panagoda Cantonment and took part in preparing a report on encroachment of state lands in the north and eastern provinces for the Defense Ministry. Thereafter in 1980, he joined the newly formed Rajarata Rifles as its adjutant under its first commanding officer Lieutenant Colonel V. K. Nanayakkara. Rajapaksa played a major role in establishing the regimental headquarters of the newly formed regiment at Saliyapura. That year he attended the Counter-Insurgency and Jungle Warfare School, Assam

This was against JVP as at that time when the Tamil Rebels were pretty much local at that time. The above details confirm that the brothers were not committed to following the rule of law but rather their own mind. The result was promotion of Blood Law  and demotion of Common law. This would have been ok if they had not pushed for the LTTE to be listed as a Terrorist organization by more democratic countries. Now both groups are facing allegations of war crimes – not because they killed but because they took on Official positions that required commitment to Common Law.

As per my discovery about Tamils – we perform competitively against a known opposition. Hence our high level of performance in education. But when Jaffna got a Separate University – as a Political settlement for standardization policy of 1972’ that push to compete was lost. That was when we sowed the seeds of separation. With that ‘handout’ we received also youth rebellion problem of the South that the government suppressed but did not resolve.

The Energies of those Tamils who continued to invest in pluralism especially to have high level competition, have raised the issue to UN level. But if the separatists hijack the agenda as if rebels were the heroes, we would reduce the height of our contributions and lower it to Blood Law level and develop into another ISIS. To the extent we are led by external governments – including UK, USA and Canada, we would become the media through which regional and global was would happen in our Homeland. The recent announcement of Iranaitivu being considered as burial grounds for Covid 19 burials strongly indicates this.

The above picture confirms that we are caught between China and the QUAD. In a way, South has successfully diluted  our own commitment to law and strengthened our investment to oppose China in the Indian Ocean.