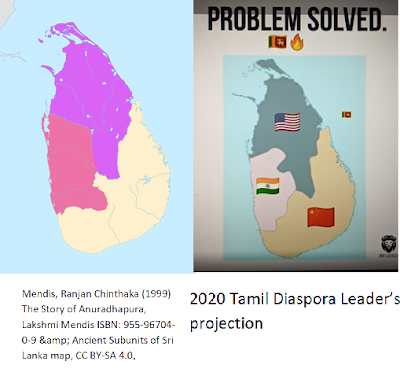 One who believes does not need proof and one who needs proof is not a believer. Often someone of common belief brings me confirmation to present my views. Then I know that no one would be truly damaged by my expressions and actions. One of the core purposes of  law is to prevent such damages. Where we lack the experience, we need to consciously use the law. Most of us do not have knowledge of most of the laws. But most of us who believe in our elders and get their blessings as if they are the law.

When we take oaths we promise to abide by the laws of the person or group and hence the oath is the invocation  of blessings. The place where the above oaths were taken are sacred due to Buddhism and not due to Common law. Hence those who took oaths at Ruwanweliseya and at Dalada Maligawa were seeking separatism through Buddhism.

They say that man proposes and god disposes. Truth cannot be destroyed. The body through which we often recognize and show truth  - changes with time and place. To the extent non-Buddhists contributed to governance in Sri Lanka – the other side also was awoken when the elected members sought to ‘show’ majority as the ruling force. Had they been true to Buddha they would have had the advice to get the blessings of the common parliamentary leaders – including the heirs of British, the Dutch  and the Portuguese. Their attachment to the physical has led to separation.

The above maps of Sri Lanka confirm that we have gone back to the times of Anuradhapura Kingdom (depicted by the map on the left). During that time Ceylon was divided into three parts:

[Rajarata  (Meaning: King's country) was one of three historical regions of the island of Sri Lanka for about 1,700 years from the 6th century BCE to the early 13th century CE.  Several ancient cities, including Tambapanni, Upatissa Nuwara, Anuradhapura and Polonnaruwa, were established as capitals within the area by successive rulers. Rajarata was under the direct administration of the King (raja/king, rata/country). Two other areas, Malayarata and Ruhunurata, were ruled by the king's brothers "Mapa" and "Epa". The Magha invasion in the 13th century brought about the end of the Rajarata kingdom.] Wikipedia

Magha is presented as follows:

[Kalinga Magha also known as Magha the Tyrant and Kulankayan Cinkai Ariyan. He is identified as the founder of the Jaffna kingdom and first king of the Aryacakravarti dynasty. According to the Segarāsasekara-Mālai the first Aryacakravarti king of Jaffna belongs to the Eastern Ganga dynasty of Kalinga. His family was connected to the rulers of Ramanathapuram in Tamil Nadu. Kalinga Magha’s relatives of Ramanathapuram administered the famous temple of Rameswaram. He usurped the throne from Parakrama Pandyan II of Polonnaruwa, in 1215. His reign saw the massive migration of Sinhalese to the south and west of Sri Lanka, and into the mountainous interior, in a bid to escape his power. Magha was the last ruler to have his seat in the traditional northern seat of native power on the island, known as Rajarata; so comprehensive was his destruction of Sinhalese power in the north that all of the successor kingdoms to Rajarata existed primarily in the south of the island.]

To the law abiding Sri Lankan LTTE leader Velupillai Prabhakaran was also a Tyrant. This includes Tamils whose political leaders have been orphaned in preference to militant leadership. My attention was drawn by Shivanthi Ranasinghe to her article ‘The undeliverable ‘Tamil aspirations’ – at http://www.ft.lk/opinion/The-undeliverable-Tamil-aspirations/14-708244

[…As revealed at the LLRC, the Sinhalese had been ethnically cleansed long before this date. Forcing Sinhalese out began as far back as 1977. By 1987, out of the 5,684 families recorded by the 1981 census, there was not a single Sinhalese living in the north. ….

Indian Premier Narendra Modi ignored all these glaring facts when he reiterated the long hackneyed demand for ‘Tamil aspirations’ at the virtual bilateral summit with Premier Mahinda Rajapaksa on 26 September 2020. It is just not possible to devolve power to the Tamils in the north and east. Before any political solution can be considered, the grave injustice to the Sinhalese and the Muslims who were living in these areas must be corrected. As attorney-at-law and author Dharshan Weerasekera reasons, to ignore this fundamental step “would in effect be validating ethnic cleansing as a tactic for gaining ‘self-determination’”. ]

Both sides to the armed war practised ethnic cleansing. It motivates them to fight. For their turn Diaspora Tamils shared with me the email headed ‘Tamil Genocide Education Week’ and a presentation by a refugee who is now a doctor in Germany. Each group to the extent they believe in the reason why – would be right for themselves. To the extent they measure through their experience only - they would be ‘right’ for their home group. Where the mistake happens is when they apply their reasoning outside the boundaries to another group – in this instance to Tamils who were committed to the official law.

Tamils as a community did not have a Tamil government at the time of the war.  To the militants who joined armed groups on the basis of ‘belief’ those leaders were their government. Majority who joined for work or by force – did not consider the LTTE leadership as their government.

Those who declared ‘Genocide’ needed to have had the experience of expulsion / termination by a force that was beyond their control. To the extent Tamils also killed Tamils – it was not Genocide or if it is Genocide – then those so claiming need to blame also the Tamil militants’ leadership.

Shivanthi seems to be ignorant of the exodus from Jaffna Kingdom during the rule of Kalinga Magha. Obviously, the LTTE is their natural heir.

When therefore the current Sinhala rulers from South effectively evicted Tamils from the Capital during civil riots,  descendants of Kalinga Magha would have naturally invoked their ancestral powers to evict Sinhalese from Jaffna. That happens automatically through the remainders of the respective karmic forces that have failed to bind themselves by current laws. This cannot be controlled by current administrators but could be balanced by governors.

Evicting Muslims is a current wrong that Northern Tamils have to right. As per my observations, this is already happening in North. In any case it was the government’s duty to protect them and failure to do so places negative karma on the shoulders of the Sinhalese and not on Tamils who did not have an official government.

The 13th Amendment confirms Equal rights of Tamils in Sri Lanka. These rights are in fact included in  fundamental rights section of the Constitution but needed to be specifically spelt out to surface readers in the government. To relate to the two – 13th Amendment and the Muslim exodus, through the same measure, confirms the frivolity of the claim to deny confirmation of right to self-govern as a separate culture to Buddhist culture.

Wherever Truth has been completed – it becomes an Eternal Power.  If Shivanthi is speaking for the current government, Shivanthi needs to get the blessings of Parliamentary elders before expressing an opinion as if she were the government. As a journalist – Shivanthi needs the experience from both sides or needs to write in partnership with a Tamil. Without that balance we would need to go to the root cause which is belief. In this instance such evictions began during a time Lanka was divided   into three. Now the three forms are Sinhalese, Muslims and Tamils. So long as they like the Navagrahas (nine planets), do not face each other – we can dilute our negative karmic forces of the past by respecting them as a whole. Once we become subservient to them – Sani Bhagavan / Lord Saturn will start ruling us – not just through our side karma but the common past.

The map of Lanka on the right confirms this – foreign takeover which is strongly attributed to invoking Rajarata which invoked its counterparts Malayarata and Ruhunurata. They are America, India & China respectively.  America took-over Rajarata through the UN Human Rights Council ‘resolution on human rights violation in Sri Lanka with 25 countries, including India, voting in favour of the document in the 47-nation strong body’. Tamils overwhelmingly supported this and continue to draw dignity from this. India keeps taking over Malayarata through business investments and China trapped Ruhunurata which would not harm Tamils due to Lord Kathirgama Murugan taking eternal care of that area’s sovereignty.

All this would have been prevented if the current laws of Democracy had been actively followed by the President and his government. Due to the failure of the President and his government to do so and also due to absence of violence on the part of Tamils, the President’s dual citizenship in real terms worked in favour of Tamils who were often  accused by Sinhala Nationalists as being foreigners from India.  India is the natural government of belief of Hindus abandoned or disrespected by Sri Lankan government and its voters. Wherever man fails to uphold the truth to enjoy unearned benefits – the victim has the power to invoke natural governance which is our ultimate reality.