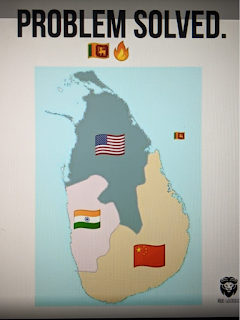 Yesterday, someone from Jaffna wrote in my Facebook page, in response to an old posting:

This translates as follows:

As a person born as a Tamil, why did you not write this in Tamil? As you would know, the Hindu religion developed in Tamil by 63 Hindu Saints who underwent many hardles was taught to us  also in Tamil in our schools.

I have written for Tamils in Jaffna in Tamil. Please see my book at austms.org. I write to wider world in English which is also highly respected in Jaffna. I did not learn Hinduism in school. I learnt it at home - largely through inheritance from my parents. I was educated at Holy Family Convent Jaffna. It is wrong of you to assume otherwise.

I was hurt by the above because someone who assumed high status over me on his proficiency in Tamil was effectively ‘telling’ me. That is NOT the Jaffna, I call home. We did not speak English at home in Jaffna. But both my parents were proficient in English in their respective pathways. Catholic education included high priority for English during my school days in Jaffna. All those to whom Jaffna is ‘home’ would attribute priority to English and Tamil at the same level. They are different and hence need to be not made senior or junior to each other. To do so, leads to separatism. Most of my readers are proficient in English. Even with those in Vaddukoddai who are not proficient in English, I write in very simple English and they feel ‘included’. They are also Hindus by belief. When the mind is merged the language is secondary. The communication happens mind to mind.

To me, it is important to mentally do the work that the other is directly doing. That results in mind merger which prevents unjust discrimination.

To my mind, this kind of ‘Sinhala only’ opposed by ‘Tamil only’ leads to self-imposed separatism. Leaders who are selfish would fail to value the contribution that we make through multicultural pathways which are richer in commonness than the ‘only’ pathways. The above guy who is using the multicultural pathway of Facebook, is being abusive of that space. He is a foreigner to that space.

An Engineer cannot be made relative  to a Doctor. The measure used needs to be common and commonness is natural through belief. Where we lack belief – we need to consciously use an accepted intellectual measure. A strong culture would have both  - just as we have elected government and intellectual judiciary. To use Dr Asanga Welikala’s words of wisdom – we need both consent as well as constraint in democracy. The constraint comes from the intellectual contributors to eliminate consent that is lacking in belief. Any more than that would lead to abuse of power.

The above user of Facebook could have ‘admired’ me for my greater proficiency in English relative to himself. But those who are outcome driven would carry the desire to ‘show’ that they are better than us without obvious status. Hence they  would look for someone who seems less proficient than they in a particular area. This is why Lord Krishna said not to be driven by outcomes but to do one’s duty which means we have the structured experience. This structure varies as we move from family to community and to nation.

Unjust Discrimination happens in a group where status is not justly allocated as per merit. This is the case with the Sri Lankan Tamil community of current times.

If Tamil nation is real – it would value diverse cultures – diversity happening through language also. Some of us may not know Tamil but we may have contributed to the independence of the community known as ‘Tamil Community’ and therefore become natural part of that community. Many ‘Westerners’ fall within that group. There would be others who may be highly proficient in Tamil but with least contribution to the Community’s independence. They are outsiders.

My father whose birth anniversary it is today, worked hard and sacrificed to put us through a good education that my mother wanted for us. That has set a good example to many in the community, within their own families. THAT to me is our true culture with multiculturalism as its crown. The Easter bombings happened due to relativity outside our circles of common belief. It was community against community and the government was not directly targeted. Thus the government became an outsider.

Jaffna as I completed my relativity has never elevated Hinduism above other religions. Let us not excessively criticize ‘Sinhala only’ leaders and become like them. Natural Justice is written by each one of us.

I received the above map when I was writing this article. It was no coincidence. It was sent by my ancestors through an heir. That is how we inherit the contributions of all saints who have heirs in Jaffna. We call them Siththar/ Divine beings. The message in the map is that we of Northern Sri Lanka need English as our First Language; those down South need Chinese and those in West need to learn Hindi. There is no room for Tamil or Sinhalese domination. That is the fate we wrote through each other.