A Truly Independent Person would look within for Truth and then identify with others’ Truth through her/his Truth. One who depends on Others’ mistakes is a relative dependent on those  others to complete the picture. Such a person is not yet independent.

The five Pandava brothers in the Hindu Epic Mahabharatham were recognized as Great Heroes. Yet when their wife Throupathi   was to be stripped naked in the King’s palace, they could not prevent it. Why? – because their obedience to elders became ritualistic and out-dated. As per that legend, Lord Krisha supplied endless sari confirming that He was the ultimate Judge and Authority. Krishna later stated that He did not stop what happened because what had to happen must be allowed to happen. But when a believer pleads, the Universal Power manifests Itself to protect Its believer. Before pleading to Krishna, Throupathi   pleaded with the King – stating that she was not a substance and that her husband had no right to  place her as a stake. The king was blinded by his attachment to his son.

I believe/d that the above happened if not as a single incident – as a regular occurrence  at that time in India and that the above was the consolidated form of a wife being treated as a ‘substance’ .  The local version (Northern Sri Lanka) of this as it happened to me in 2013, is in the Appendix. Later when I learnt about Vithiya Sivaloganathan’s rape and murder in 2015 and 6 year old Regina’s rape I knew that I had done right by speaking up which was on behalf of all women in that area. Like Throupathi I had courage of my truth.  Like Krishna supplied endless sari, Swami Sathya Sai Baba provides endless wisdom of why something that bothers me has happened. Hence I write on the basis of my own painful experiences – so all in our group will be protected.

Yesterday, a common Sri Lankan wrote to me in response to my article ‘ OBAMA & LTTE ‘

[Be that as it may, a majority of right thinking Sri Lankans will accept the fact that for the country as a whole to do well, there should be equal rights and privileges to all Sri Lankans.

Our problems of the past hinges on that. The sooner our Leaders realize that the better for Sri Lanka. ]

My response was [True. Wherever we are able to we need to take the lead]

During JVP uprising in Southern Sri Lanka Ms Premawathi Manamperi was also stripped naked in the Holy area of Kathirgamam:

[On 5 April 1971, JVP insurrection started and Kataragama was a center of insurgent activity. The small Kataragama police station, under Sub Inspector Udawatte was attacked several times by insurgents and the police withdrew from Kataragama. Colonel Derrick Nugawela was appointed military coordinating officer, Hambantota District on 11 April 1971, began organizing the military units in the area to counter the insurgents and reestablished government conrtole in the district. Having entered and established control of the town of Tissamaharama, a platoon of troops from the Gemunu Watch held by Lieutenant Alfred Wijesuriya, a volunteer officer moved on Kataragama on the 16 April under the orders of Colonel Nugawela. They entered Kataragama and established camp at the Kataragama Pilgrim's Rest with limited opposition. Inspector Udawatte and his policemen were ordered to move into the army camp, as the police station was damaged in the attacks. On the 16 April Inspector Udawatte and three police constables came in a jeep and arrested Premawathie at her home. That day several girls, including Premawathi, who were believed to be involved with the rebels were arrested.

Premawathi was tortured through the night to no avail revealing nothing about her activities. Infuriated the lieutenant made Premawathi take off her clothes and walk across the town nude while been beaten by him and another officer. Finally stopping near a post office, the officers opened fire on the girl and buried her alive. They returned on two separate occasions to finish her off. She ultimately died from a bullet to the head from a rifle of an unknown soldier.] Wikipedia

The Hambantota District which is the home area of Rajapaksas carries the above sin committed during the time the first Woman Prime Minister in the world was heading the government.  UNP leader  J R Jayawardene  politically took benefit from the above Tragedy

[Her murder attracted national attention and was a major issue addressed in the 1977 election. UNP candidate J. R. Jayewardene discussed the attack in great detail and condemned Sirimavo Bandaranaike's handling of the crime to discredit his opponent.]

To the extent J R Jayawardene  profited from the weaknesses in the Armed Forces – it became his legacy – which manifested in 1983.

To the extent the  LTTE profited from the 1983 pogrom it shared in the above karma which resulted in LTTE reporter Isaipriya being put  through similar treatment as Premawathi. To my mind, the LTTE which blocked Tamils from voting in  the 2005 Presidential Elections so Mahinda Rajapaksa of Hambantota would win, became part of the forces that shamed Isaipriya whom they failed to protect.  During the 2009 battle, when some girls escaped the LTTE custody I learnt that they went into hiding and could not be part of the civilian community in Vavuniya – because they could be identified through their short hair – cut by force by some sections of the LTTE.

Nimal Vinayagamoorthy – an LTTE heir – invites through his Colombo Telegraph article ‘Maveerar Naal – ‘The Need For A Collective Memorialization In Tamil Eelam’ –  claims as follows:

[This day helps promote the Tamil community’s social recovery from the violent conflict, and bring to light the injustices and discrimination the Maaveerar and us as a population have been through. Hence, Maveerar Naal is a Tamil National memorialization day which must to accepted and respected. It is a public day and needs to be observed at a public place to grieve someone very dear. ]

If unjust discrimination is the measure – then Tamil women of junior castes are the queens who lead this Tamil Nation. To my knowledge I am the only Tamil who has questioned the Tamil Leaders – from LTTE to Judges including one who turned Chief Minister. One who has transcended relativity is the truly independent leader. All others are relatives of such leaders in the group.

As I picked up my file I said to our lawyer ‘I am really disappointed with you.’ At that moment Mr. Yogendra who was standing next to our lawyer – at the head of the bar-table also looked in my direction – and I said to him in Tamil ‘

/ ‘I am not a prostitute’. So saying, I  walked towards the Public end of the Court. Then I heard our first lawyer Mr. Nadarajah say to me that I was being summoned. I turned around and walked back to the  witness box and removed my shoes. But I did not get on to the box because no one asked me to.  Then the Judge asked me in a stern voice ‘

/ What is this place?’  I was confused. I was wondering whether the Judge was referring to me not being accepted as  a Ceylon Tamil???  I did say

in Tamil, when giving evidence.  My mother spoke Indian Tamil as she was born and brought up in Burma.  I was wondering whether I was showing signs of my mother through my IndianTamil for the word Yes.

is Indian for Yes.

Besides, Swami Sathya Sai Baba came in my early morning meditation and blessed me. Given that Swami was Indian – I may have brought that pronunciation during the court session. All this was running fast in my mind when the Judge said ‘ 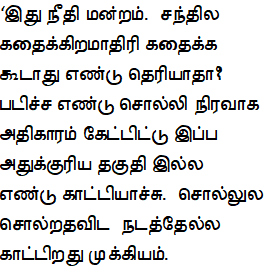 ’ (This is Court house – Don’t you know that you should not show street behavior here in Court? You claim to be educated and sought Administrative authority. But now  through your conduct you have proven that you do not deserve that.  It’s not good enough to say in words. More importantly your conduct must confirm your claim)

I looked blankly at the Judge for the first part of the above outburst by the Judge. Then the penny dropped – that somehow the Judge had got knowledge of my statement to Mr. Yogendra. It’s often mind reading.

So – on top of being effectively labeled as a prostitute and a cheat – I was now being accused of street behavior. I just stared at the Judge.  The woman in me broke down and cried – silently inside. It really was too much at this point for that soft woman within.

Then our lawyer spoke out and said to the Judge ‘I apologize on her behalf but her behavior is understandable given that her second marriage was brought before this court again.’  The Judge immediately showed a smiling face to the lawyer and explained that it was not given consideration.  Our lawyer then said to me ‘You better apologize’ . I looked him straight in the eye said ‘No I won’t. I spoke the Truth. I have no reason to apologize for.’

No one said anything for a few moments and I took my file again – this time from the floor and my bag next to it, wore my shoes and walked away. At the other end of the bar table I bowed to the Judge’s chair  – where my real Lord was seated as per my mind to the extent I spoke the Truth relevant to honor my dead relative,  and walked out of the Court room.