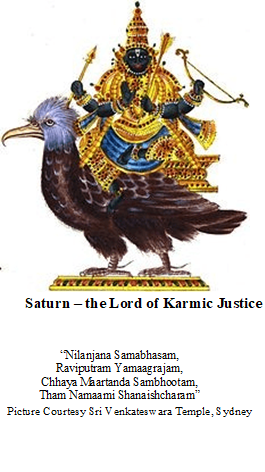 Saturn – the Lord of Karmic Justice is Arriving through 13th Amendment!

This came around the same time as the email headed ‘Would Deniswaran act in the interest of the Tamil People? It arrived on 13th as did the above picture with the following message from Sri Venkatesawara Temple:

[Saniswaran or Sanibhagawan refers to the planet Saturn and is one of the Nine heavenly planets known as “NavaGraha”.Lord Saniswaran is a handsome person carrying a sword / sceptre with crow being his vahana/vehicle.

He is the God of Justice and delivers results to all, depending upon their thoughts, speech and deeds. He also signifies spiritual asceticism, penance, discipline and conscientious work.]

I read through the presentation of the Court’s  judgment with a view to identifying with the truth. I believe I have Energy in this regard to empower not only Tamils but also to empower the Sri Lankan Judiciary  which recently awarded justice in my favour against a very influential Sinhalese. If I therefore empower the Common Judiciary – that would – as per my belief,  empower Tamils in Colombo who would by default access Colombo Judiciary. Towards this I have the Franchise to take the side of Mr Wigneswaran if and only if I found that he did his duty to follow the law in Administration. I need to do this to elevate the Administrative structure of the Tamil Community.

In management, we encourage folks to elevate a conflict. The reason to my mind is wider participation by many and the derivation of the outcome as per each participant’s truth. Kept at truth level, it empowers us beyond local environments. If politics is the main pathway then we would empower and be empowered by our local environment of current times. Since the political version is about Administrative balance in Jaffna, we need to ensure that merit based Administration in Northern Public Service is not damaged by our expressions of political support. A premature judgment even at ‘thought’ level would block the escalation to higher common level.  Now that we have raised the conflict politically to global level, we need to ensure that we do not judge prematurely and block the pathways to formation of global teams. Such Team formation through Energies would sustain our unity beyond local shores and are likely to enhance the opportunities – including job opportunities at local level, through global intelligence investment.

In the court matter – as per the published details, Mr Wigneswaran invoked Section 14(f) of the Interpretation Ordinance, which  is reported to state that ‘the person who has the power to appoint any officer shall have the power to remove him.’

Article 154F(5) of the Constitution reads as follows:

[The Governor shall, on the advice of the Chief Minister, appoint from among the members of the Provincial Council constituted for that Province, the other Ministers.]

This meant that the Governor had the lawful power to appoint Ministers towards which he was entitled to draw on the advice of the Chief Minister. The parallel of this at National level is covered by articles 42 & 43 which include the following:

42 (4) The President shall appoint as Prime Minister the Member of Parliament, who, in

the President’s opinion, is most likely to command the confidence of Parliament.

43. (1) The President shall, in consultation with the Prime Minister, where he considers such consultation to be necessary, determine the number of Ministers of the Cabinet of Ministers and the Ministries and the assignment of subjects and functions to such Ministers.

(2) The President shall, on the advice of the Prime Minister, appoint from among Members of Parliament, Ministers, to be in charge of the Ministries so determined.

Since the Governor is President’s parallel at provincial level, those who did not oppose the above provisions introduced through the 19th Amendment which became official in 2015, have no political right to claim a verdict that would be unlawful as per the above provisions’ parallels at Provincial level. In fact the amendments to Articles 42 & 43 seem to be the escalated versions of Article 154 which came into existence through Amendment 13 in 1987 – which was strongly influenced by India.

The 2018 Constitutional Crisis happened due to President Sirisena interpreting Articles 42 and 43 – the way Chief Minister Wigneswaran seems to have interpreted the powers of article 154. But the parallel of the President is the Governor and the CM is the notional parallel of the PM.

In 2018 – Mr Mahinda Rajapaksa stepped down from the position of PM, once the dissolution of Parliament by the President was ruled to be unconstitutional. That was Chanakyanism / Machiavellianism at its cleverest. He thus carried the Energy of the position without taking the risk of showing the People that he could be  officially marked unlawful by the Judiciary. Hence the overwhelming support through Preferential votes in the 2020 elections.

Mr Wigneswaran failed to demonstrate such Chanakyanism / Machiavellianism; nor did demonstrate that he learnt from Mr Mahinda Rajapaksa – the way to prevent being marked wrong officially. That is the price he paid for his ego which seems to have blocked his mind connection to senior politicians – including Mr Sumanthiran who was part of the team that worked on the 19th Amendment which in this instance included the core values of the 13th Amendment. If Mr Wigneswaran had transcended his judicial status  and taken a ‘learning position’ with seniors in Politics – he would have prevented the current anxiety that  his supporters have expressed.

Mr Deniswaran has sued the Governor also. The State is responsible to compensate him. This ‘lesson’ would be lost if he withdrew his case. Mr Wigneswaran is the one who has to consider the higher value for the People – not only Northern Tamils but to Southerners whose Governors and Chief Ministers may play politics instead of practicing logical Administration that his healthy for the brain and therefore the mind.  I went to prison for upholding the law. The process followed by the authorities was unlawful. But I did not even think revenge. Hence I was heard more strongly by the People – including through my book Naan Australian. One who has courage to be marked wrong by others despite her/his judgment that s/he is right – would not fear prison but would pity those who are living in their mental prisons of attachment to the past – which is a matter and therefore is not capable of merging with current Energies. Hence the saying ‘Eppavoh Mudintha Kaariyam / A matter completed long ago’.

Now I will learn about the position with the media that sent me Caitlin Johnstone’s post mentioned above – by the ranking allocated to my work vis-à-vis that of the reports by Mr Wigneswaran which to my mind have thus far have demonstrated higher level of approval by the Tamil media.