How About Indian-Lankan Dual Citizen in Lankan Parliament?

There are proposals to repeal the provision in the 19th Amendment to the Sri Lankan Constitution, through which Dual Citizens are banned from being elected to Parliament. Whist looking through the documents for the relevant provisions, the following Articles came to my notice:

[(99.) (1) At any election of Members of Parliament, the total number of members which an electoral district is entitled to return shall be the number specified by the Commissioner of Elections in the Order published in accordance with the provisions of paragraph (8) of Article 98.

(2) Every elector at an election of Members of Parliament shall, in addition to his vote, be entitled to indicate his preferences for not more than three candidates nominated by the same recognized political party or independent group.] 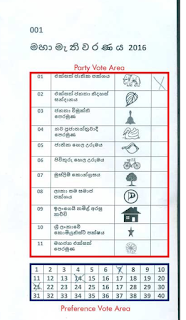 This seems to have been the reason why Mrs Sasikala Raviraj felt cheated. To be valid, the Preference vote has to be for the same area/electorate/division as the Primary vote. Jaffna District cannot collect preferences from Chavakachcheri voters for the purpose of seat in Parliament. It is interesting that Mr Wigneswaran’s TMTK and Mr Ponnambalam’s AITC did not win first place through primary votes in their local divisions within Jaffna and yet have seats in Parliament.

The two elections ought to have been separated. They seem to have been introduced to cheat the Common elector who elects by belief. The way the law  has been worded and the way the ballot papers have been printed – voters could be fooled to suit the clever nominee/leader  who takes advantage of the trust of the voter who often cannot see the big picture through his vote. The least a voter ought to be able to see is her/his candidate’s position within his division which is then represented in Parliament. THIS has been denied to the folks of Chavakachcheri. There could be others who may not even know that they have been cheated.

When true believers get cheated – the karma returns through various avenues. All this happened during UNP Presidency and today UNP has not even one electorate to its credit. They had the opportunity to make it more logical to the voter but they failed. Now SLPP also is ignoring it – and their turn will come in due course of time the Black dog vehicle of Kaala Bairavar.

How can the electors of Sri Lanka whose leaders have little knowledge of fundamentals of democratic voting be expected understand the logic of Dual Citizenship? The 20th Amendment, would facilitate the likes of Mr Basil Rajapaksa, who is known to be an American also,  to enter Parliament. But it would also open the doors for Tamils living in India and holding citizenship in both countries to enter Lankan Parliament. Is that what the government seeks?  If yes, then we go back to old times that Mr Wigneswaran referred to in Parliament – as his first task in the new position. Was it thanksgiving speech?