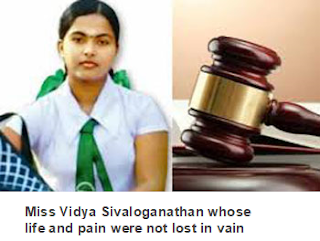 Yesterday, I was waiting for a call from a trainee in Jaffna. The training was in interpreting what happened as per the Law. Instead he sent me a recording of his performance in music!!!His certificates did not permit him to state ‘sorry I do not know’.  Had he done that,  he would have positioned his mind vis-à-vis mine as per the Truth in this matter. Instead he found it more convenient to separate himself so he could get the ‘right’ tick in his area of expertise.
Sri Lankan State Minister for Child Affairs Vijayakala Maheswaran, to my mind, has done likewise in terms of militancy. That is the structure under which she was groomed. But was that the true reason for the rape and murder of that 6 year old in Chulipuram, Vaddukoddai? Is that the reason attributed by the child’s  family and immediate community? Mrs Maheswaran failed to have in mind, the value of minds raped and murdered by armed militants who recruited from schools. In fact in the rape and murder of school girl Miss Vithya Sivaloganathan not too far from Mrs Maheswaran’s home area by birth – Mrs Maheswaran was seen to be protecting the alleged perpetrators. The President whom Mrs Maheswaran blamed in relation to the Chulipuram rape and murder, actually visited and was with the victim’s family. Mrs Maheswaran’s involvement in Vithya’s case was reported as follows:


The Truth as per this elder came out as -  ‘LTTE also wasted 30years of Tamil peoples time, energy and other resource’. When we do not have someone to blame – we would need to look within or accept what happens as our own karma – as this elder has done. But what about the younger generation that is entitled to our heritage – when our children could go to schools without the threat of being recruited by armed militants?  I responded as follows to the above:

If educational structure is secondary to armed militancy – then those who support armed militancy, including Mrs Maheswaran,  are wasting their resource in educating their children to become professionals seeking intellectual solutions. There are many such Tamil leaders in Jaffna. Mr Wigneswaran is another example. This happens when we are driven by immediate outcomes that do not pass through our heritage. In the Northern Tamil system of Thesawalami – this difference is clearly distinguished as Muthusum (Heritage) and Thediya Thettam (current earnings). The parallel of Muthusum who leave the structure to join another – is Dowry. The credit attributed to the LTTE is dowry. They do not get share in Muthusum – Heritage.

[The judgement delivered last week into the rape and murder of Sivaloganathan Vithya raised suspicions over the actions of State Minister Vijayakala Maheswaran.
High Court Judge M. Illancheliyan, in his ruling, noted that Maheswaran had taken steps to secure the release of the main accused when he was captured by residents following the rape and murder.
Illanchelliyan also said that Maheswaran did not take any measures to have the accused identified as ‘Swiss Kumar’ handed over to the police.] Sunday Leader article - Vithya Rape And Murder Judgement: Suspicion Over Vijayakala’s Actions
If at that time – Mrs Maheswaran felt more for the accused than for the victim, that revealed that she did not feel for the victims as if Vithya was her own child. This feeling is a fundamental requirement in democracy by majority vote. We experience the Truth through different pathways. The Truth we experience is given different forms and they are all ‘right’ for each of us and those who travel through our pathway.  Likewise, outcomes are interpreted by each of us in different ways for our own purposes. But when it comes to Public – the common form is as per the law expressed by the highest authority. If that authority does not feel part of the whole – s/he has the duty to consciously fill the gap through knowledge. Mrs Maheswaran as minister had the requirement to fill that gap through knowledge about paedophilia – especially after Vithya’s case. Instead, Mrs Mahewaran praised the LTTE while holding government position.

To majority Sri Lankans LTTE may not be Terrorists. But to the Government that positioning is needed to limit distractions from civil administration. It is like ‘caste’ system which labels each group as per their traditional jobs and skills.

The LTTE themselves would accept the Terrorism label from ‘outsiders’ – so long as it is not stated within their home-territory. In terms of National Affairs – the People of Jaffna have NOT elected militants to represent them. If that were to happen – Jaffna would be part of my past and not my present.

A Tami elder in the Diaspora responded to me as follows:

[Sorry I have not read your article fully, Yet I felt like adding my opinion on this issue,  I feel what Mrs Vijayakala Maheswaran would have meant, was that the discipline was high during LTTE governing Jaffna. Then it was so good that all ages of Women had no fear in walking alone in Jaffna roads and lanes. However, She failed to choose appropriate words correctly. But she has conveyed facts. It was others faults for thinking other wise, but those who think and equate LTTE with terrorism are sad people. Mr W.Weerawansa &JVP have done worse things than LTTE has done, they have forgotten their past. Sumanthiran was almost right to be silent, explanation  by him would have never fallen on those deaf ears of Sinhala politicians from all parties, they too would accuse him. Since Independence 70 years have passed; yet the Ethnic question has not been answered fully. TNA has wasted 3 years ,by siding this government. Nothing would happen in the coming next two years as well. LTTE also wasted 30years of Tamil peoples time, energy and other resources. ‘It is difficult to wake those who are pretending to be asleep’. Let’s leave this at that, and blame our Karma vinai for our fate?  ]

[If you believe that LTTE rule was right – then you must accept that child-recruiting was right. Then what happens to our investment in higher education? Under Vijayakala our children would not access our investment in higher education. THAT may be your Jaffna. It is certainly not mine. Karma vinai acceptance must include your children and grandchildren. Are you ready for them to be less educated than you? What happened to your investment in education? Can you see it through LTTE children? If not you are an outsider to them]