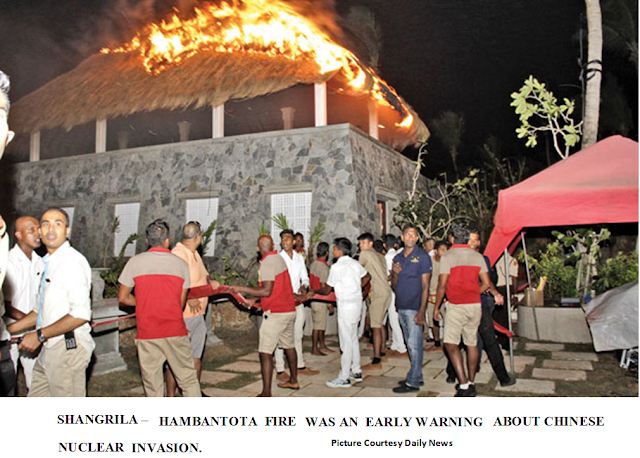 The declaration in Supreme Court of Sri Lanka, on behalf of the President that the Chief Justice can be a foreigner confirms how karma has turned the tables.

Where the conduct of those who oppose the government through belief, is more in accord with the law than that of the government – and the government is not changed by the People, the Opposition’s surplus goes into the area of Divine Power which is absolute power. As per  Hindu philosophy, one who renounces pleasure moves towards Bliss. Accepting the existing structure in which Government has higher powers than the Opposition, an Opposition that adheres to that structure more than the government, gets access to Universal power. A government that fails to uphold that structure despite hardship of citizens,  accumulates negative Energy and eventually is not able to work that structure. That seems to be the case with the current government due to its ‘China money’. This is a clear example  of how karmic forces have worked against this government. THAT is the lesson all of us Sri Lankans need to learn. When majority effectively ‘retires’ after getting elected and minorities continue to work within the framework of the law – the Ultimate Reality is positive for minorities and therefore for the whole. On 07 May 2019, after feeling with the victims of the Easter Bombings, I highlighted a connection under the heading ‘Tourism & Terrorism – Separate or One ?’ as follows:

{Shangri-La Hotel is part of confirmation that we have fooled the International community about the war-karma of Sri Lanka. Shangri-La Hotels were towards pleasing the Chinese customer. The first of the two – Shangrila Hotels in Sri Lanka built in Hambantota area which to me is land covered by Lord Muruga of Kathirgamam whose protection covers all Hindu Tamils whose presiding deity is Muruga. The following account of the bad omen was published by Daily News on Thursday – 02 June 2016:

[A fire broke out at a pavilion of the newly built Shangri-la resort, in Hambantota, last night.

The incident occurred during the opening of the hotel, graced by President Maithripala Sirisena and other distinguished guests.

Eye-witnesses said the fire broke out during a fireworks display, following the opening of the hotel. The fire brigade was called in immediately after the fire broke out and it was doused with the assistance of employees and residents in the area.]

Land and Fire are members of the Natural Elements family. When one is affected  – it has the power to invoke the other to reward or to punish. All it took was for a true Sri Lankan believing  in Sri Lanka as well as in Murugan – to feel pain due to the war – to invoke the fire . There are plenty of such believers who pay their respects at Nallur and escalate the Tamil-only person’s submissions to the higher level.  The rest happens through the system of Natural Justice / Karma.}

The believer prevents and protects through Indicators. The Easter Bombings confirmed that Mr Sirisena lacked belief and hence failed to prevent. The current President also openly limited himself to Sinhala-Buddhist leadership when he took oaths at Ruwanwelisaya shrine built by King Duttugemunu.  But King Duttugemunu did not resort to Buddhism to defeat Hindu emperor Ellalan. As per the records King Duttugemunu, invoked his belief in Kathirgama Murugan to defeat the Tamil emperor. Since the current President invoked only the Buddhist power – he lost the war-power in its current form.

As per Colombo Telegraph report :

[Romesh De Silva’s arguments in court coincided with a merchant ship bound for China docking in the Hambantota Port on Tuesday (20) night. The Sri Lanka Atomic Energy Regulatory Council sent out an alert that the vessel contained uranium stocks to be used in nuclear power plants. Radioactive material cannot enter Sri Lanka without special approval, the Council said. The vessel not only failed to declare it was carrying uranium, initially Sri Lanka naval personnel were not permitted to carry out an inspection.]

We still do not know the evidence based cause of the Corona Virus. We do know that its spread is exponential – like a nuclear force. By neglecting its duty to multiculturalism and by promoting anti Buddhist values of war – this government has invoked the curse of all victims to whom Sri Lanka was / is ‘home’.

Until we know otherwise, we are entitled to reason as per our belief. They would all meet at the One destination. I connected to the stronger attack of the Corona Virus in Victoria, to the contract between State of Victoria and China in relation to the Belt & Road initiative. I was happy to learn this week about the scrapping of the deal by our Federal government.

If the Sri Lankan President feels sorry for the suffering of Tamil civilians in the war under his leadership – Hindu believers will naturally offset the nuclear threat  - including through the QUAD to whose power we all contribute. The ethnic issue is now global and the solution needs to be global. I reiterate the concluding message in 2019:

Emotions have no real value beyond the borders of  the physical grouping;

Intellectual power has no value outside the common measures, laws & theories

Belief alone is our eternal supporter and protector.